Stop Motion Videos - How Not To Make One PART 2

So, last time, if you haven't read, I talked how my band was looking for an idea for visualisations. We played around with a simple DV camera to get some footage but didn't like the results. Most of the clips felt boring... others had some unexpected results.

Because we felt we wouldn't be able to make anything good with that material and a digital camcorder that cannot handle HD. We decided to go for stop motion, instead - with no prior experience.

As I'd mentioned previously, our bassist is a fairly proficient albeit non-professional photographer, so he knew how to take pictures, use lighting and lenses.

The problem was making up a story and animating it, designing characters and certain time constraints. We needed to have enough footage for a 4 minute movie done in 2 days.

Normally, a stop motion video uses from 12 to 24 frames per second for animation. Which means you have to take from 12 to 24 pictures just to animate a single second. We didn't have that much time, so we decided to go for 10.

Having decided upon the framerate, we had to think of a story and the material we'd use and settled for plasticine, since we thought it would be easier to animate. And it wasn't, especially when we were filming outside during summer with a temperature of around 25 degrees Celsius.

Animating plasticine figures is difficult for a few reasons, not only do you have to make them sturdy enough not to fall apart but you also need to be careful not to deform them as that happens easily with hot light and warm hands you use to animate your figure with. I decided to make a 'skeleton' out of wires for the one-eyed purple guy to make him more stable, the problem was, however the wire wasn't elastic enough, so sometimes while moving the character, the plasticine would move without the wire, making the skeleton stick out of the 'flesh'. I've decided to rectify that with adding more wires to the character, to make it look like a design choice, and thought it looked nice. 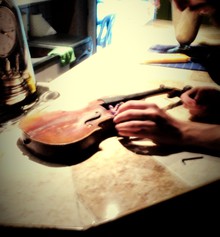 Another problem with plasticine is that animating facial expressions is risky if you haven't got replacement models - we had only one of each character, thus we couldn't replace the head to animate it, adding movement via editing software would have taken ages, and adjusting every frame in terms of lighting and colour via macro commands had already been a chore for the photographer.

When it comes to the character designs, apart from what I mentioned about the wires, we chose to go for humanoid but not human creatures. We felt it would give the video an otherworldly feel. We had some fun with the designs - horse/beetle face, purple one-eye, flesh Elvis. To give the world a even more of an abstract, surreal flavor, we settled on using rooms, instruments and rails as sets and candleholders as props. Whether it worked to the video's advantage is up to you to decide.

If it comes to the story - there was no real idea or time to write one. We made up things as we went, however, we tried to stay true to the abstractness and weirdness we opted for at the onset. The props and sets gave the whole video a somewhat allegorical and symbolic atmosphere, we hope, especially the scenes recorded on the piano and the violin.

Take a look for yourself and if you feel like it, tell me what you think. 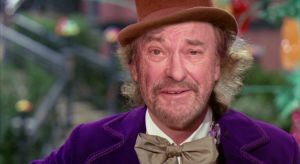