Megacon 2015: An Image-Heavy Report From The Heart of Orlando.

I just got back from Orlando. Not even wasting any time to "relax" or "breathe." 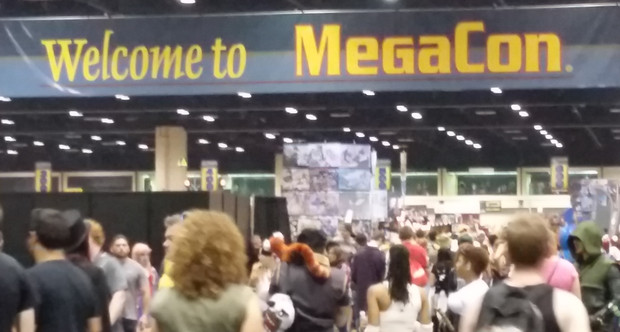 I just spent an obscene amount of money on merchandise, food and a multi-day pass to Megacon. What is Megacon? Basically a huge comic book convention that also covers anime, video games, and toys. Never been to a convention before? Well, this post will hopefully familiarize you with the culture and customs of the con-going people.

Forgive me for the blurryness of some of these photos. I didn't realize that my phone didn't properly focus in on certain things until well after the photo was taken, and it looked perfectly fine when I initially took it. Friggin' technolomogy.

Day 1 started when I got there: 3 PM. Me and the friend who drove had left home a little late in the morning, which made the 4+ hour drive seem to last even longer. Not anyone's fault, and it wasn't the end of the world.

First, I had to get my ticket: 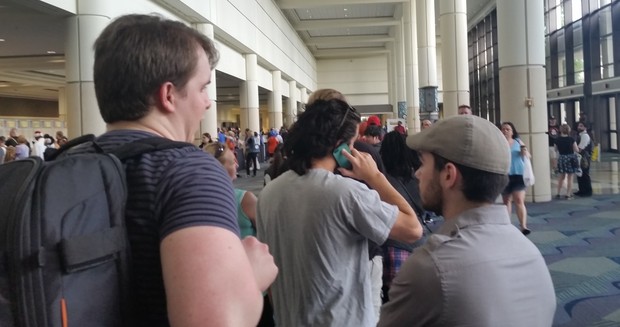 It wasn't really easy to convey this via a photo, but the line was LONG. Really long. Walt Disney World without a Fastpass long.

This is what I was in line for: 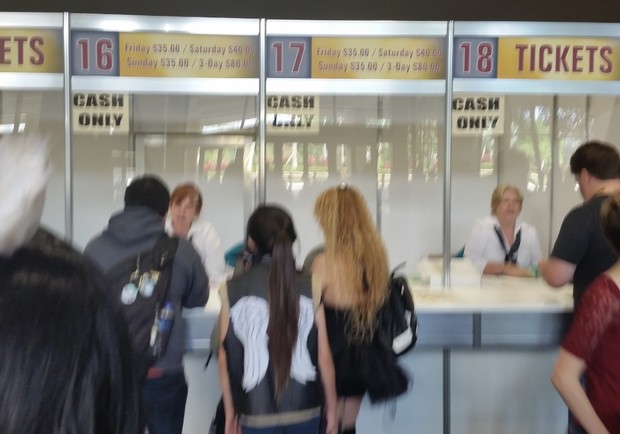 Yeah. Three-Day passes were $80. I'm fairly sure that the website repeatedly advertised that the passes were actually $60, but the people working had no idea. Whatever.

I didn't stay for tomorrow's events, sadly. The friend who joined me was unable to stay that long. No matter. It actually only cost $5 more for the three day pass than it did for two days individually. I certainly didn't want to wait in line a second day.

After I got my wristband (a lovely neon green that I didn't photograph, sadly), it was off to the main hall: 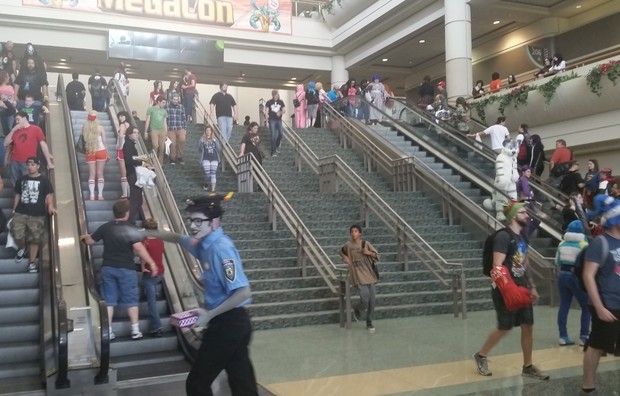 Yep, that's a convention alright. This was taken on Friday night, so there were actually a lot less people there than today. Probably only half of the crowd. That said, half of Saturday's crowd is still a TON of people. Lines were long, as you can see by the right escalator.

Inside, you get to the real Megacon: 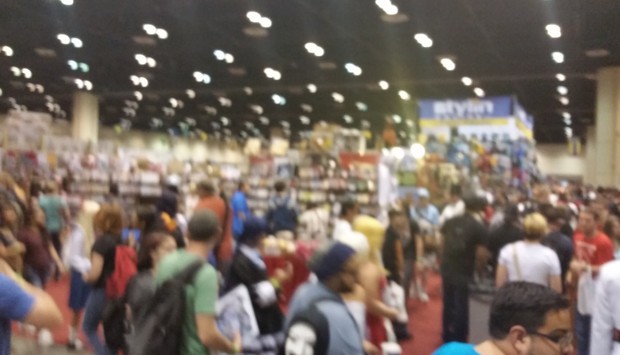 Once again, i inadvertantly took a lot of blurry photos. Next time I do this, I'll bring a real camera. I kind of like this image, though. Wraps up the image of the main hall as a whole quite nicely.

The main hall has everything that you could possibly want. Do you like toys? 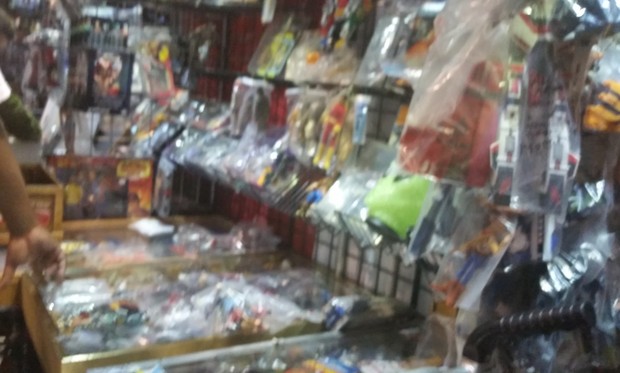 How about video games? 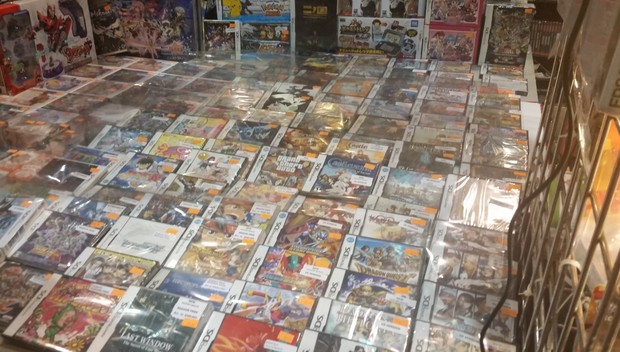 Yup. They're all about the video games. 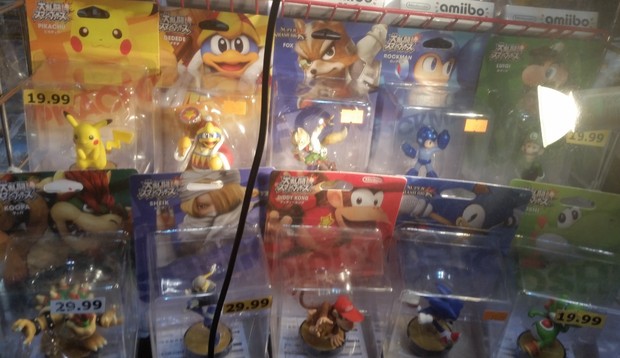 They have those, too! This seller seems to be doing the age-old practice of bumping-up prices at his booth. You really shouldn't be paying those prices for any of these Amiibo - even the imports. Boo! 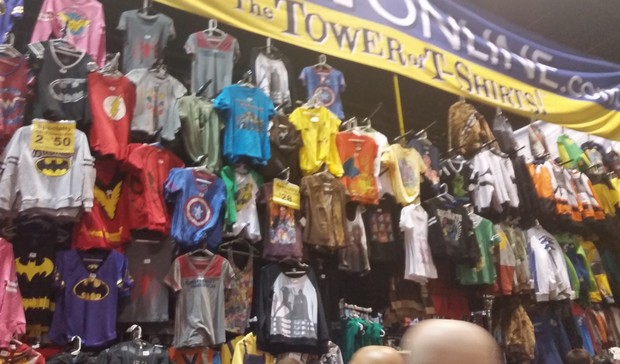 Oh yes, there are shirts to be bought and worn here. Every little bit of pop culture is represented here, even stuff you didn't expect.

But to hell with all of that. Check out these plushies! 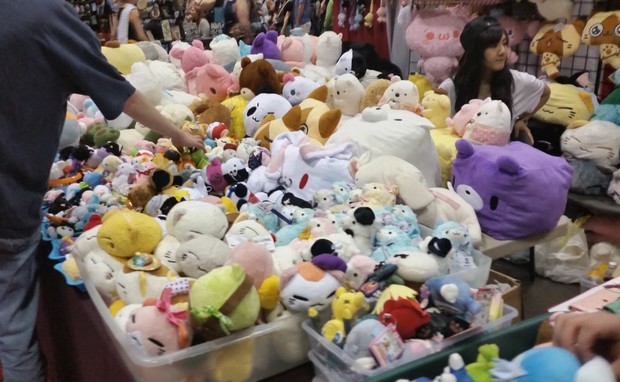 There was plenty more where all of this came from, too. Every Eevee evolution, tons of Piplups and Mudkips. Mega Man, Zero, I think I saw a couple of Croc plushies.

No Shedinja, Minccino, or Cinccino. Kinda disappointed on that front.

After a few hours of walking around and buying a couple of things, it was time to head out for the night, putting an end to our first day of the 'Con. It took forever to get a shuttle, but we finally did it: 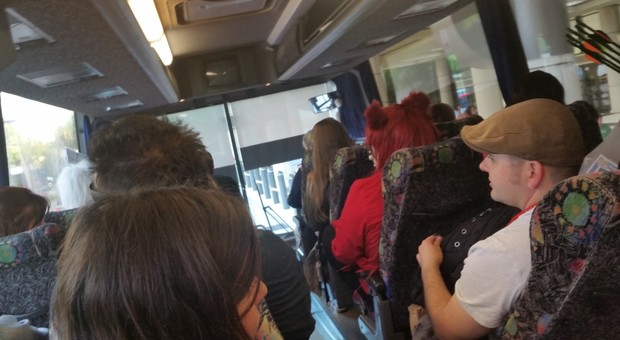 My friend and I decided to head to our hotel after exiting the shuttle. He booked a room on Priceline, so we didn't quite know what to expect. Honestly, as long as I could crash on some sort of couch or twin bed, I wasn't gonna complain.

What we got was a goddamn palace of a hotel room for a hell of a deal: 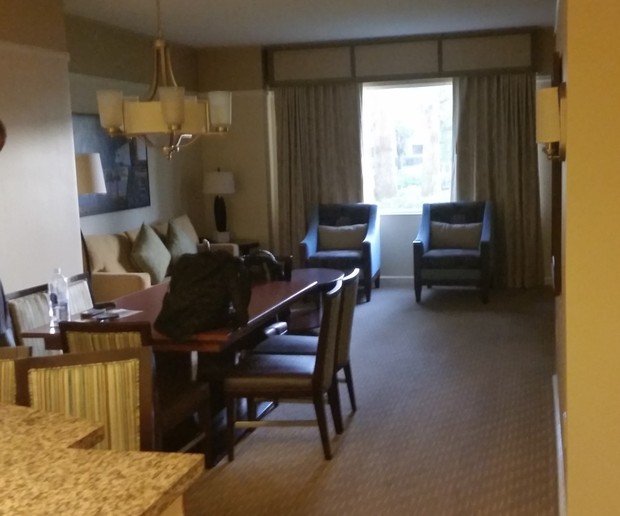 This room had a full living room, a dining room table, a full-size fridge and freezer, microwave and normal oven, glassware and plates in the cupboards, a couch that pulls out to a bed, a bedroom with not only a queen-size bed (that my friend got to use after I lost a coin-toss, relegating me to the couch), but also a goddamn hot tub. In addition to that, the bathroom had a walk-in shower. Keep in mind this photo only shows the living room. This place was awesome!

The room cost something like $100, which for Orlando, FL at this time of year is pretty insane. I could have comfortably lived here for a very, very long time. 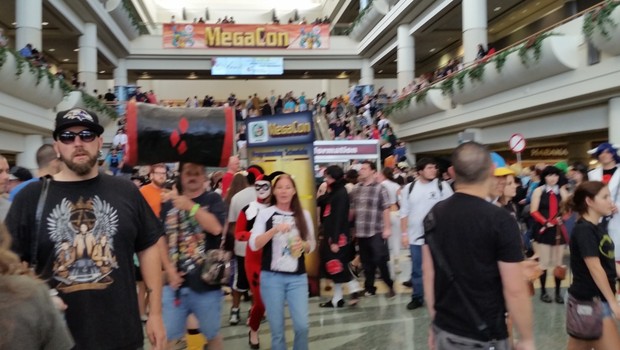 OH GOD THERE ARE THOUSANDS OF THEM.

Yep. Saturdays are the busiest days for Megacon, since everyone has the best chance of being able to go on a Saturday, and most of the convention-y stuff like the panels and the celebrity signings take place on Saturday. The crowds were insane today. There were more people than ever this year, it seemed.

Here is another shot of the crowds, taken from the top of an escalator: 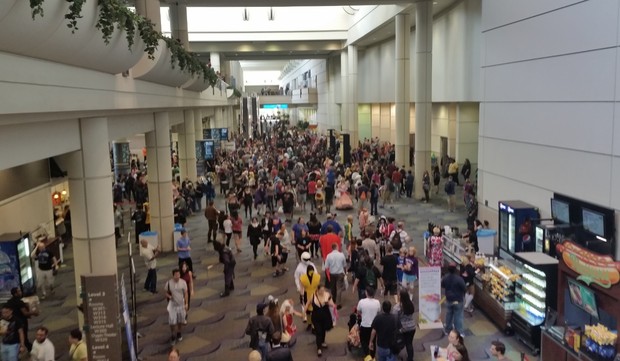 That is a lot of people.

So, what did I do at Megacon today? I bought stuff. Sad to say, I wasn't able to get any of the stuff that I posted about yesterday. They didn't seem to exist at this convention. No worries, though. I got a bunch of other cool things; video game-related and otherwise. No swords, though. I'm not a fan of that stuff, but it's totally cool if you are.

Oh, I totally had lunch there, though:

Sausage, peppers and onions with rice & beans. For a $10 lunch item, it was surprisingly good. I don't take pictures of food often, but for the sake of journalism, here you go.

Full Sail University had a nice booth, showing off an arcade cabinet with some school projects in it: 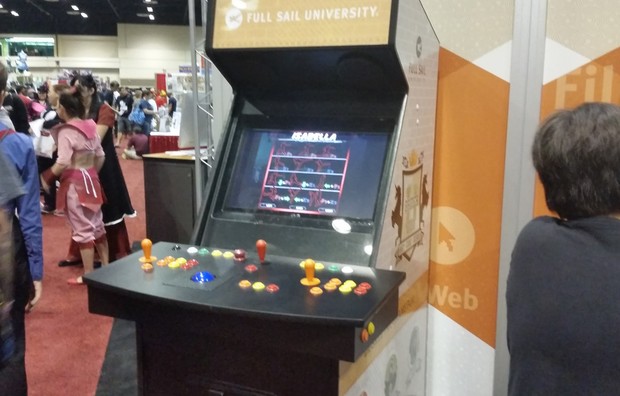 The DAVE School had a cool booth, too: 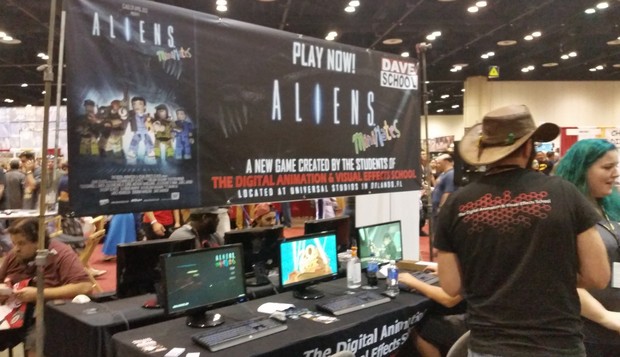 Alright, since most of my con-going experience was fairly straightforward, here are a bunch of photos of my favorite cosplayers I photographed while at Megacon. Some are blurrier than others. My bad. 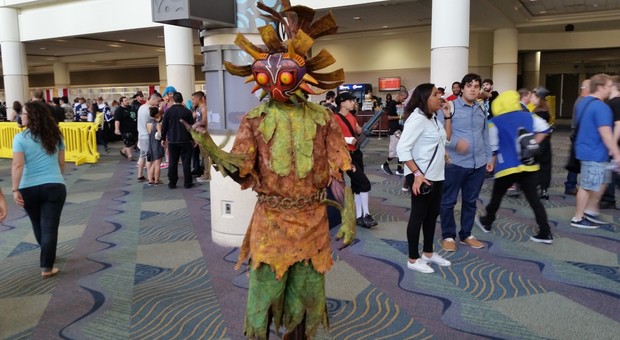 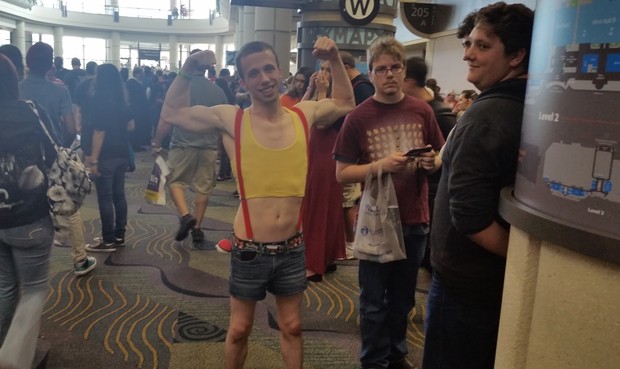 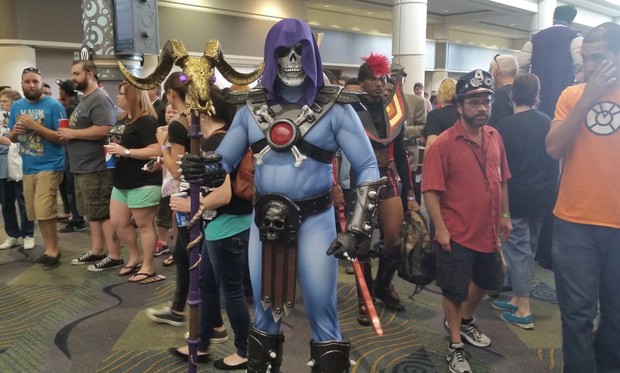 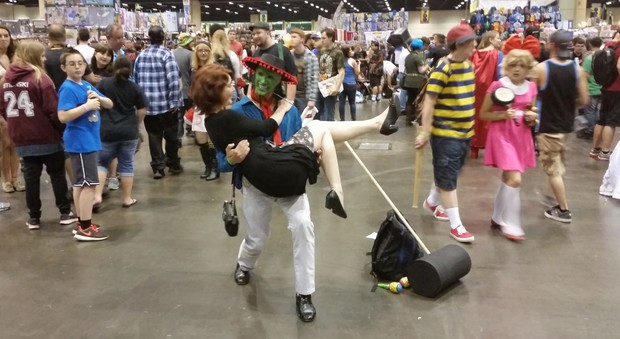 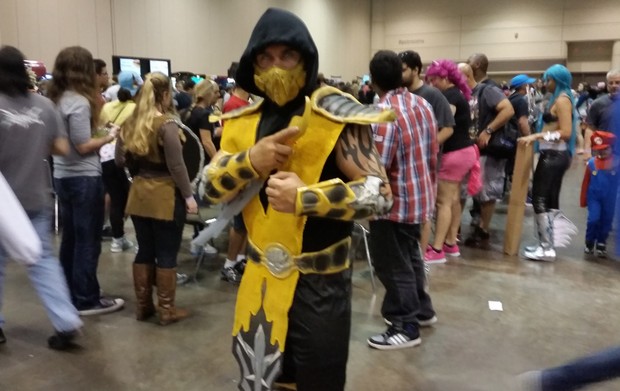 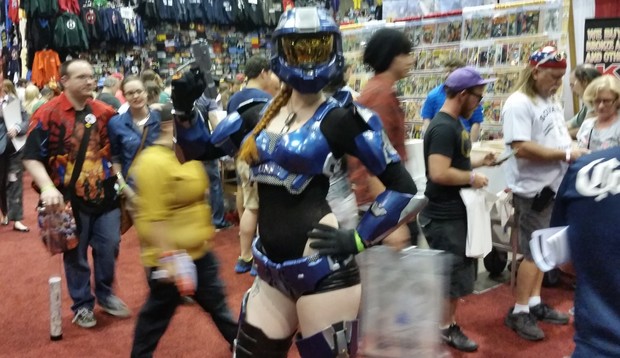 Oh, I also had to take a picture of the Troma booth: 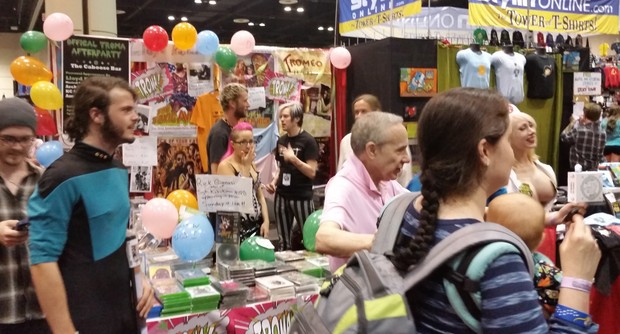 Aaaaand that was that!

Megacon was an absolute blast this year. I got a ton of cool stuff, got to see a ton of cool cosplayers, and I definitely wish I could have stayed a third day, but it's not that big of a problem. I did all I needed to.

Megacon is still ongoing! They're doing their final day tomorrow, so if you're in the Orlando, FL area, you can make your way down to the Orange County Convention Center and check the awesomeness out for yourself!

I'll try to make another blog post showing off the stuff I bought, but I'm gonna wait a little bit because I seriously need to rest.