Salutations and welcome to another exciting instalment of Bundling Idiot, the Cblog in which I discuss a new gaming bundle for all you lovely boys and girls. This blog came a little sooner than expected but when the bundles appear so must I! Today I will be discussing the pay what you want tier of the Humble Weekly Bundle Roguelikes 2. 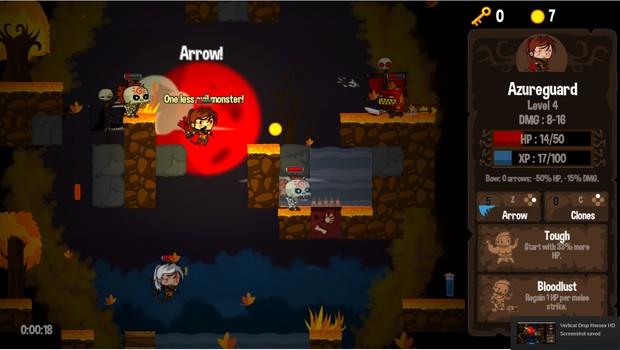 Vertical Drop Heroes HD is a “Roguelite” platformer in which you must descend to the bottom of 10 stages in search of the holy sanctuary. For each attempt you make to reach the sanctuary you pick between 3 randomly generated heroes each with different weapons, abilities and passive traits. As may seem contrary to the genre, death is not particularly punitive as when you die the gold you have earned is kept, and can be spent to upgrade future character's stats. If this all sounds a lot like Rogue Legacy it's because it is, with the major exception that the combat is awful. The range of the weapons is tiny and to get close enough to an enemy to strike, you will almost always take damage too. Another complaint I have with the game is that when an enemy dies a slow down effect occurs to emphasise the kill, but this happens so often (and is also activated when an ally kills an enemy) that it ruins the flow of the game and caused me to mistime a few jumps. I could not find a good enough reason to play Vertical Drop Heroes HD as opposed to the similar and more polished Rogue Legacy, which is such a shame as I liked a couple of the ideas on display. 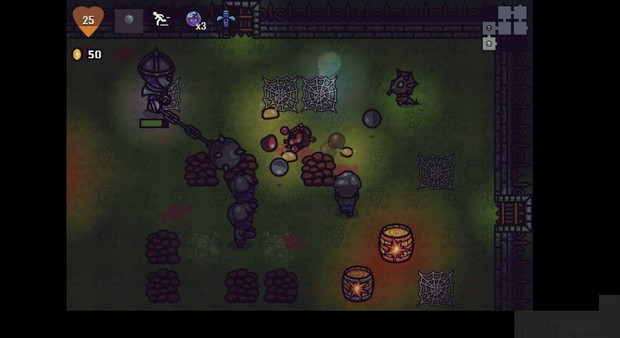 A Wizard's Lizard is a “Roguelite” twin stick shooter in the vein of The Binding of Isaac. You play as a lizard trying to rescue his wizard owner by entering different dungeons. Each dungeon beaten is kept track of so if you die on the second dungeon you will not have to repeat the first; you can also collect weapon blueprints and rescue citizens to send back to the hub world, adding another layer of persistence. The gameplay involves you constantly upgrading your character with a huge array of weapons, totems (a turret that operates on a cooldown timer) and armour. The game also has an incredibly interesting system in which, when you die, you come back as a ghost and continue your current run; however enemies upon death also spawn ghosts which can only damage you in your ghost form, making the game harder. A Wizard's Lizard is a compelling and incredibly difficult game which uses its difficulty to make it all the more rewarding when you finally make enough progress to improve future runs, and I think I love it. 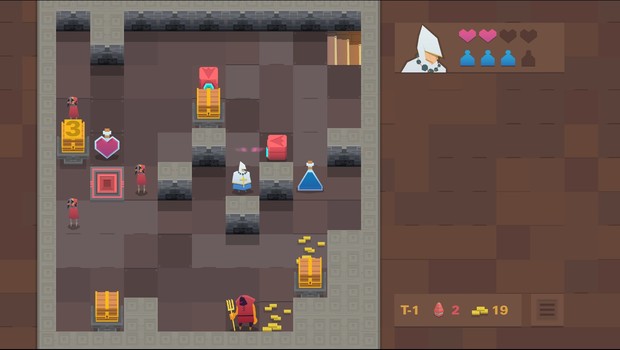 The Nightmare Collective is a turn based puzzle Roguelike in which you move each member of your party in the same direction at the same time. The combat is all implemented by bumping into the enemies (the traditional Roguelike way). Each of the characters have different special abilities based on their class, such as healing allies or a ranged attack. When timed correctly these can prevent the party from taking damage. Planning out each turn carefully as your team grows bigger becomes more complex and sacrifices must be made. The downside to this is when a team mate dies there is almost always a replacement you can collect from the next floor making careful management unnecessary. Unfortunately for me, the game seems to be much more based on high score chasing than survival, and in a Roguelike I found this jarring and was not compelled to play for a long period of time. On my second attempt I beat the game and just didn't feel the need to continue playing The Nightmare collective. If this was a tougher game in which survival was important I think I would have found a lot to love here, and if you are more of a leaderboard chaser this could be the game for you.

Compared to the last bundle I wrote about, it is harder to recommend the Humble Weekly Bundle Roguelikes 2. For A Wizard's Lizard alone it could easily be considered worth paying what you want, and if you want to pay more then I've heard nothing but praise for Heavy Bullets. Other than those titles it is a tough sell.

Thank you so much for reading, and as always any questions or comments are welcomed with open arms.

Until the next bundle, I bid you adieu!

I'm Lyle from Yorkshire England, I've been using destructoid for years now but never got into the blog scene...well here goes nothing! Got into gaming playing a NES when I was 2 and got a SNES for my 3rd Birthday with Mario All Stars. I was fairly strictly Nintendo until I got a PS2 and branched out to everything.

A few all time favourites of mine (not a definitive list but tried to keep things diverse) are Mario 3, Zelda wind waker, Viewtiful Joe, Snowboard Kids and The Binding of Isaac.