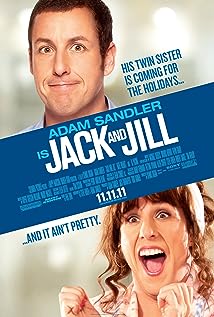 Welcome one and all to the first ever Shit Box Shitty Extras! This is where I go down low and find shit that wasn't commissioned, and then suffer through it. To open up this side series, I thought I'd go bad. Real bad. Adam Sandler bad. Adam Sandler is a trip, he used to be either you love him or hate him, but these days, you mostly hate him. I decided I'd tackle his worst reviewed movie of all time, Jack and Jill, sitting at a whopping 3.5 on IMDb out of a 10.0. That's 35%. Let that sink in.

Jack and Jill opens on an honestly not terrible note, showing interviews with twins and all the passive aggressive sibling stuff to be found. It's the only enjoyable part of this movie, as it immediately moves into fart jokes for the sake of fart jokes. It's Christmas or some shit and Jackam Sandler is dreading the visitation of his sister, Jillam Sandler, as he drives to the airport. When we meet her, we realize why; she's a passive aggressive, racist cunt whose only method of speech is that stupid voice Adam Sandler does in most of his movies. It's not pretty.

So Jackam and Jillam get back to Jackam's home to introduce us to I guess family, friends who never show up again, and some homeless dude. The ragtag bunch sit down for dinner, and Jackam's adopted son begins taping things to his body, which is supposed to be funny I guess, but isn't. Jackam and Jillam get into a fight over nothing, and verybody sides with Jillam for some reason even though she's a completely unsympathetic piece of garbage. The homeless guy walks away, how I evny him, and nothing of note really happens.

So the day comes, and the fighting is put behind everybody, and Jillam is fucking disgusting, leaving behind massive sweat stains on the guest sheets. Breakfast is had or something, and the development of a subplot in which Jackam is trying to get Al Pacino for a commercial is shown by Jackam watching some of Al's movies. Outside at the pool, Jillam is introduced to her first love interest, some racist stereotype of a Mexican who works for Jackam. Jillam hs been overstaying her welcome by now, so to try and get her to leave, Jackam takes her to the Price is Right for some reason, where she gets a cuncussion spinning the wheel, and we go home I guess. This movie is hard to follow, bear with me.

So Jackam Sandler gets some tickets to a basketball game Al Pacino will be visiting, and we get to meet Al, chilling out in disguise with... Johnny Depp, what are you doing? I didn't want you in the Shit Box twice, get out of here. Stop it. At least be an evil not evil AI if you're going to do this thing. Please. Please, Johnny. So anyway, we're introduced to the love triangle, as Al Pacino falls in love with Jillam at first sight for some reason. He goes completely insane over her, this movie does him no favors. Jackam approaches Al to see if he'd be okay with doing the commercial, but the man is blinded by Jillam's... "Charms" and the whole game ends in literal seconds, then everyone goes home.

I don't remember what happens after this, just that there's a birthday party for Jackam, which Jillam gets upset at not being accounted for with a second cake. You're an uninvited guest, they weren't expecting you to be there, get over yourself. Jillam is spirited away by Al Pacino, who's been sitting in a closet for some reason, and they head back to his place for a romantic night of Al turning on his house sirens so he can find his way home. Al's honestly pretty smooth, he's got a dozen cakes ready for her back at his place, he plays her some piano, he even has mood lighting, but she ain't having any of that being treated like a goddess stuff, nope. She turns Al down and heads home, a common theme of this movie so that they can minimize set use.

The next day, Jillam goes out with Mexican Guy to a family birthday party, where she experiences Mexican food and culture for the first time. There's a stupid joke involving a grandma who draws power from jalapeños, but this party honestly looks like a lot of fun. Lots of people, open space, piñatas. Jillam, for the first time, fits in somewhere, and this is the single best part of he movie. The comedy is minimal, and it's just people having a good time. Nothing to complain about here.

Back at home, Al Pacino says he'll give Jackam his commercial if he can get Jillam to fall in love with him. It's all very contrived and stupid, bu Jackam agrees and invites Jillam out on the family cruise they do every New Year. For some reason the family is happy with this, even though she's completely unlikable. When Jillam realizes that Jackam's just trying to get her with Al for the commercial, Jackam dresses up as her and goes to meet Al. The scene with Jackam dressing up is the only funny scene in the entire movie, entirely because of the bathroom aide who helps him with his fake breasts. You the real MVP, bathroom aide.

So I cut out about 40% of this movie, including the parrot I think is voiced by Adam Sandler, because nothing of note really happens. It's just boring, unsympathetic caracters, fart jokes, and Al Pacino getting shat on by the writers for some reason. I've seen a lot of Sandler films, and most of them are utter garbage, but there is definitely a reason this one is considered the worst. Adam Sandler should not be given three separate roles in a single film. Please, for your own health and safety, do not watch this. Do not even think about watching this. Ignorance and innocence suits you all better.

Anyway, as always, for the first time, I hope you guys enjoyed this extra shit, and have a happy Thursay everyone. As I said previously, join me Monday for my usual commissions with Suckerpunch.