Majora March: Lend Me Your Ears 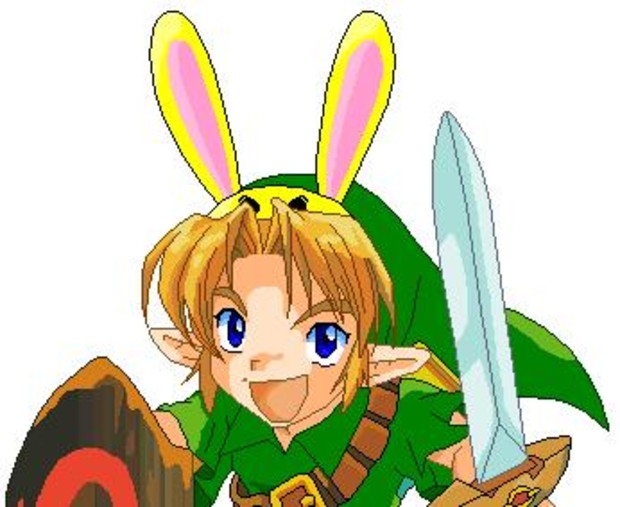 Majora March is all about celebrating the minutiae of The Legend of Zelda: Majora’s Mask in wake of its recent remaster on the Nintendo 3DS. Playing the game with a fresh coat of paint has the cogs in my giant clock tower of a head turning constantly on the subject of Termina and its peculiar inhabitants.

Whether you’re a veteran fan of the game, or you’ve discovered it through this new version, one item is an essential addition to your hero’s inventory at the first possible opportunity: the Bunny Hood mask. Below, I’ll outline the reasons why it is the finest mask out of the twenty-four on offer. 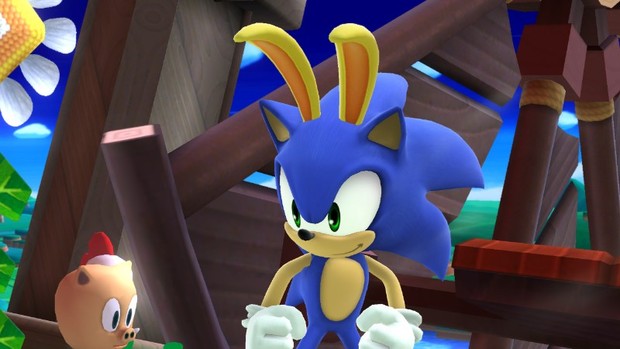 Let’s be honest: Link carries a goddamn lot of stuff all the time. I’ve always assumed he opted out of wearing pants to avoid them falling down from the massive stash contained within his pockets. Anyway, Link’s pantslessness is a topic for another day; my point is that it’s hard for him to move around swiftly with such a hefty load weighing him down at all times. This poses a bit of a problem since he has to cover a lot of ground in such a short amount of time.

Enter the Bunny Hood. Whereas other masks physically transform Link to give him new abilities, the Hood simply enhances his standard talents and puts some spring in his step. Wearing it, Link can move twice as quickly and jump further than ever, and he’s a lot more satisfying to control with this extra bit of energy. Sure, Goron Link can blast through the countryside of the overworld, but his lack of jumping ability limits the usefulness of that in smaller quarters. I personally keep it permanently mapped to the bottom-right touch-button so that I can slip it on anytime I transform back into Hylian form.

It even allows Link to be so fast that he can hear time itself with those floppy yellow ears, however that supposedly works. When used during timed challenges, it causes a physical timer to appear on-screen for greater precision timing. Imagine how efficient you could be at your job with these abilities; you’d have to goof off at the office twice as hard just to balance it out! And don’t even get me started on the potential applications in the bedroom. Lllllladies... 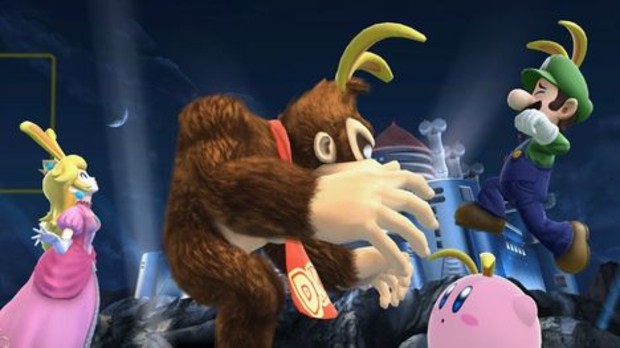 The infamous three-day cycle of this game means that you’ll be experiencing new things each and every time. One thing, however, remains consistent: you’ll be spending almost the entire time staring at Link’s rather unspectacular backside. So why not gussy-up the view with some cutting-edge flair?

This “mask” is merely worn atop the head, meaning that Link’s face remains uncovered while it is equipped. This prevents his expression from being obscured when you trigger a story sequence while running at top speed across the four corners of Termina. Dramatic moments somehow lose a bit of weight when your character is (literally or figuratively) stone-faced with no reaction. Granted, wearing silly bunny ears dampens the mood a bit as well, but it’s not like the other characters aren’t all clad in outlandish outfits anyway. Plus, if you wear it all the time (which you should), you’ll probably stop noticing the difference pretty quickly.

It even has a rad little bounce to it as you zip around, with its ears flapping in the wind to demonstrate how fast you’re going. It’s basically the Ferrari of silly animal hats, but without the unfortunate implications of impotence. In fact, since the rabbit is a universal symbol of virility and fertility, it would actually have the opposite implication. Will the fun, sexy Bunny Hood times never end?! 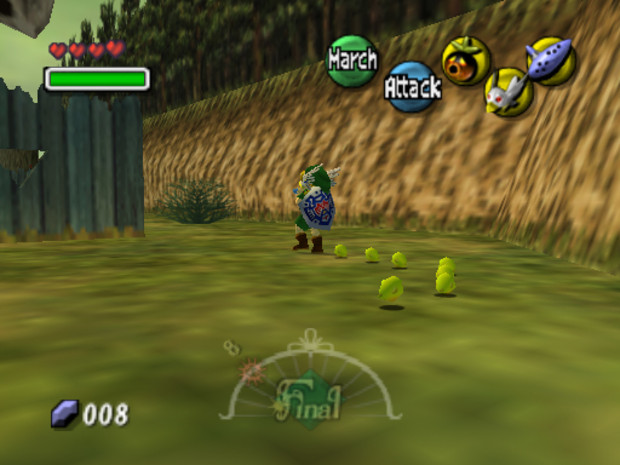 The Bunny Hood belongs to a man named Grog who elects to spend his free time hanging out with cuccos at Romani Ranch. Like all sidequests in the game, you have to scratch his scaly, pale back before he’ll scratch yours. Luckily, his request is adorable and the method of carrying out his wishes is charming as all heck.

There are many cucco chicks scattered around this section of the ranch, and Grog is depressed that the impending Moon of Doom will keep him from seeing his little friends grow up. Obviously, this means that Link must use the power of marching-band music to magically usher them into adulthood before Grog’s eyes, so that he can bear witness to the miracle of fowl puberty before his numbered days run out.

This is far from the most emotionally-wrought plight in the game, but it resonates in a unique way. If you’ve ever loved an animal, you know that owning one is a bit like being a parent. Nothing is scarier to most parents than missing the chance to see their children grow and flourish. Wearing the Bunny Hood serves as a constant reminder that you were able to solve such an eternal problem, even if only for a few days. 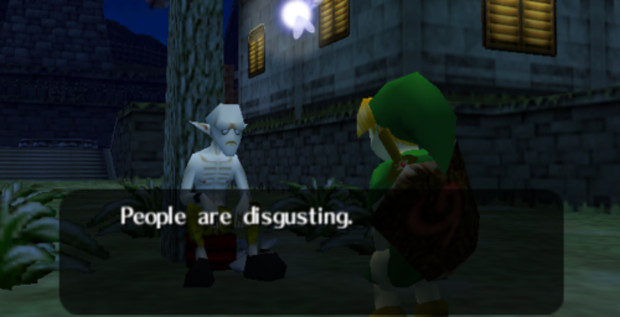 And that's why, on any playthrough of Majora's Mask, I immediately bee-line for the Bunny Hood as soon as that freedom is afforded to me. I've spent more time wearing this fictional hat than all the Team Fortress 2 players on all the servers in all the world. Probably. Maybe not.

Whitey is prone to overthinking stupid things and under-thinking important ones. Most of his time is spent playing handheld games while binging on podcasts. He has a penchant for less-than-classic games, bad movies, and terrible television.

Disclosures:
-On friendly terms with PR folks at TellTale Games