Majora march: Rediscovering  Termina – Just as good as before

I was one of the people who liked the original majoras mask. I didn’t buy into the BS about the game not being like OoT and there for being inferior. For a game with only 4 dungeons it is actually a rather large game with many events of the game connecting together to advance progression that doesn’t feel as tired as OoT, even if they do share similar elements.

What can I say to express my love for this game? To me it’s the best thing invented since air conditioning on a hot summer day. It’s a game that’s satisfying to play as a kid. As an adult it’s even deeper since I can understand and appreciate much more of the games story. I mean hot damn some of that shit is really deep. So deep in fact that I can’t get through it all, but I’ll list some of my favorite moments. They’re just as good if not better than they were before.

Some videos will be used, but I couldn’t find just the cut scenes for the 3d version. Everything is either a let’s play or a full compilation of all scenes.  same goes for images as much of the stuff I'm finding is the old stuff.

Darmani – This one gets me every time. A proud warrior who only wishes to save his people meets an unfortunate end on the way to snow head temple. He cannot rest though. He begs you to bring him back to life, or that you at least ease his suffering. You play the song of healing, a beautiful song if I might add, and you’re treated to this scene

Fucking beautiful. When you take the whole thing in he is surrounded by family and friends cheering on their champion. All the love his people hold for him is reflected in the various interactions and conversations you have around the Goron village. There is no better send off for a proud warrior than one like this.

Pamela and her Father.

Ikana is a scary place, even more so since the dead are roaming the land. Passing the Octoroks at the start of the level by either ice arrow or bomb jumping with the Zora mask you can hook shot your way to the top. You can bomb jump by placing a bomb behind you as link and then looking out your camera in the direction you wish to go. It must be done at a ledge. The Zora’s mask is needed for the extra height it gives you. I performed the bomb jump simply because I wanted the mask from the area first, along with mirror shield since it can all be done in a day or so.

Anyway this segement takes you to the cursed land of Ikana where you have to go to the springs to cleanse sharp of his curse with the song of storms allowing the water to once again flow through Ikana. This allows the music box house to play the tune farewell to Gibdos send them back to where they came. All is not well however. Entering the little girls house (Pamela is her name) you discover that her dad was cursed with the Gibdos mask making him a Gibdo. Playing the song of healing removes his curse and returns a loving father to his concerned daughter. They embrace and you get a mask. it’s short but it’s really sweet.

The ranch has a few quests to do throughout the game which involves everything from raiders to aliens, and yes I know they say ghosts but they’re cow abducting aliens. The Part that I want to talk about however is in the final day. Should you save the ranch and speak with Romani she will say that she gets to have some chatue Romani (an alcoholic beverage) and that she’ll be an adult. The truth of the matter is that her sister knows the moon will fall and decides to ease her sisters suffering by getting her drunk on the final night. She won’t feel a thing as the moon falls and obliterates them all while they lie in bed together. Can you imagine holding your brother or sister knowing that both of you are going to die and all you can do is take the suffering away, but not the ultimate end. I have a younger sister I love dearly, and this tears me to pieces when I really think about it. Soldiers at the gates

The soldiers believe the moon will fall, but they’ve sworn to protect all who live in the city and they’ll do it no matter what. On the final day they’ll let you flee, and one particular enhancement or change in their speech on that day makes it even more powerful than before. “it pains me to see the children playing in the streets, not knowing what’s to come”. That was something I never thought of before and yet Majoras Mask 3d took the time to point this out. Now I could be wrong, but I never remembered seeing that line in the original. Anyway, despite the danger they remain ever vigil to the end. 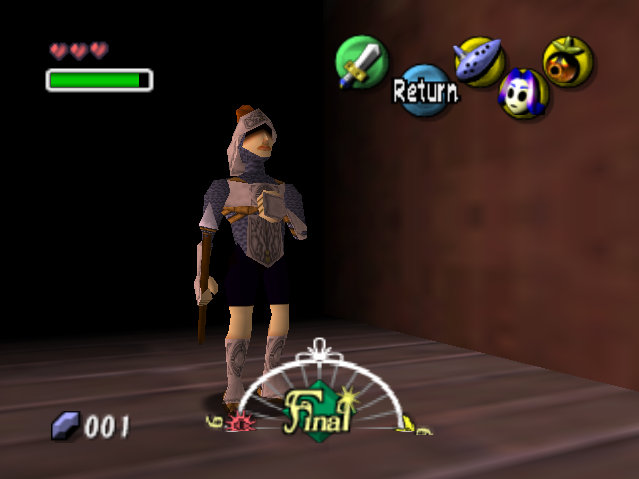 Probably one of the best love stories ever told in a video game, Anju and Kafei quest is my favorite moment in majoras mask to date and the enhanced visuals make it a really enjoyable experience. It’s a long quest that takes the 3 days you have to perform. A story about a guy who gets cursed, loses his wedding mask, and has to get it back before the moon falls. Throughout all the doubt and worry Anju remains faithful to Kafei and likewise Kafei to Anju. At the end with only an hour left they marry/become a couple and give you the mask as a sign of their union. They end by saying “we will greet the morning together”. You know there won’t be a morning unless you stop that moon, and you do in fact know that if you don’t they’ll die in each other’s arms. It baffles me sometimes that a game like this still holds so much meaning and love putting to shame big budget AAA games and their “cinematic experiences”. Just goes to show that good writing can trump sacks of cash any day of the week.

The game is visually improved and much the same as I remember it with a few changes such as the location of the stone mask and a few item differences like stray fairies and extra bottles. The boss battle also have an extra step of sorts added to them which makes it a bit more fun and exciting for fans new and old.

best boss fight in the game. I said fuck it and went full on Zora battle in the water.

Personally I like the new system a bit more that the old. I love the new saving mechanic as I don’t have to reset time upon saving like the original. The only thing I don’t like is swimming in Zora form. I can’t swift swim and rotate the camera with the c-stick. It makes the beaver race even more frustrating than it was before which I thought to be impossible.

In the end Majoras mask 3d brings a lot of my favorite elements of the original game to a portable console with beautifully enhanced graphics that are not a mere upscale like most HD collections. It’s the same game I feel in love with all those years back, with improvements that make it even better.