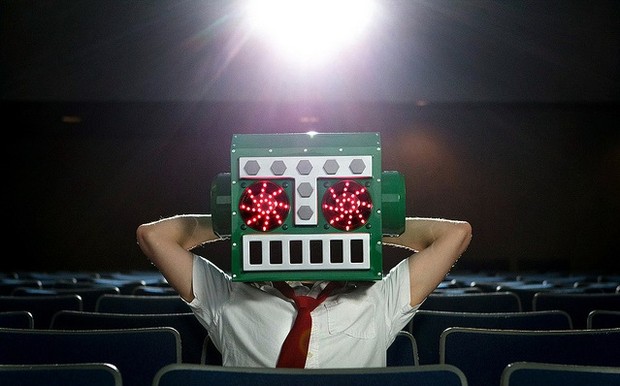 Pre-rolls are far too often simply gameplay montages, story montages better suited experiencing along with the actual game, or sometimes just tiny bits of trailers you may've seen many times before even considering your purchase along with some extra title flashes like "GOOD AND ALSO BAD" ... "WHICH PATH WILL YOU CHOOSE?". They often do very little to excite, but who could blame them? It's just those few extra moments before you hit the main menu. Who gives a freak about those?

I grew up with games that got you excited even before I could change the brightness to an extent that, in no way, reflected how the prompts told me I should tone said brightness. I have turned it all the way down and that first image is still clear as day! Oh and where is the awesome butt rock?

Embrassingly enough, this was the best segway I could come up with. This pre-roll is about half campaign footage, which I specifically decried above! However, it's in the way they edited it together with the other half and how they synced it to one of the greatest theme tunes ever by kind of famous Sonic band (that's pretty much what they are) Crush-40 that gets me excited. It was works like this that influenced my passion for video-making.

If this doesn't give you chills, acquire a shittier taste in music and maybe things will work out.

Why Sonic Adventure DX, specifically? More high definition-y and the logo is nicer. It's that kind of remastering that we, in our 8th generation of gaming, can appreciate!

The PS2/Xbox/Gamecube (Dreamcast?) era is chock full of excellent pre-rolls. Though, looking back, many of which impressed on a visual level rather than one artistic (we were easier to please back then). But, sometimes, they did more than show off the latest CG technology.

Remember the fight between Qui Gon/Obi Wan and Darth Maul in Episode One? One of the few great parts of that film? There's something about a 2 on 1 fight that really gets me (clearly others as well) especially engrossed in the action. Even better when it's featuring characters dear to me despite my extreme inability to play fighting games to this very day. With the way I fight, you'd think these characters were total dorks.

Who's gonna win?! Is Raiden at a disadvantage or is he an absolute tank? Holy crap, he now has the upper hand! He really is a tank! Oh.. oh no! Raiden, get up! You're the protagonist! But, wait... now Quanchi and Tsung are fighting? WUT?! Now all three team up against a sudden "dragon king"? The excitement never stops.

The coreography is occasionally a little Shatner-esque, but it's endearing all the same.

Oh my lanta. Did you see that? That's the tip top of the original arcade Donkey Kong stage! I never noticed that! Fitting, of course, given Cranky is canonically (yes, Donkey Kong has canon) that same Kong that started it all.

The SNES was my first console experience, all the way back in 1994. Even though I was just 3 or 4 years old, I distinctly remember walking out of Toys 'R' Us hugging a Donkey Kong Country/SNES bundle in my little arms... which would soon be given to my aunt and not me. I guess she really wanted me and my cousins to come visit as much as possible and, ya know what, it worked. Clever girl.

I would always indulge myself in this short little animation. I chuckled a bit each time I saw it. It made me almost wish it would continue onwards like a full-fledged cartoon. Come 1997 (in the US), FOX Kids was the place to see exactly that and...

Oh, what joy Brutal Legend could've been had it knew what to do with itself. Grandpappy of metal, Ozzy Osbourne, couldn't even save it (God, such fantastic models and animation). One day, perhaps we'll see a fully-realized Brutal Legend from Tim Schafer and co. that impresses gamers and heavy metal fans alike. Until then, let's try to best enjoy what we have, eh?

Partly, the game's pre-roll. Unlike many others, it's actually live action! And starring Jack Black! That brother is always a good watch. Energy and passion ooze from all his best work, even if some may be tired of his antics by now. For all the missteps Brutal Legend took, it's cast and story were not amongst them. Setting up said story directly addressing the player towards a legendary tale hidden within an ancient metal vinyl was brilliant and fit the tone of the game perfectly.

That it was all done in a single, continuous shot helps it stand even further out from the rest. It's such a crime that projects like Brutal Legend are so rare. 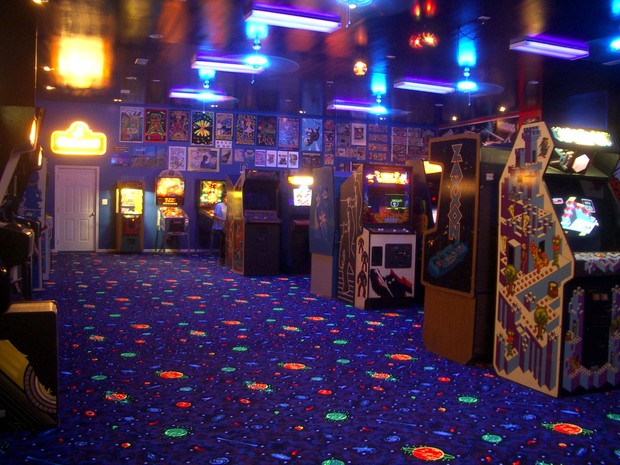 For as priviledged as I was growing up, it wasn't easy asking my mother for even several dollars to play a video game similar to the video games I could just be playing at home. Even my very naive, spoiled, young brain knew it was stupid, so I would mostly stare into those screens for minutes on end and often pretending that I was playing rather than the computer.

Yes, they weren't much more than simple gameplay montages, but arcades were so far-removed from playing video games on your consoles or portable devices. Not only was it a wholly different experience, but they needed those lazy pre-rolls and that thumping music to get you to stop at their cabinet rather than that Pacman one for the eleventy-billionith time. I so wanted to play them, but I, at the same time, couldn't be bothered. Their pre-rolls, though, were my windows into those worlds.

From Cruis'n World, The House of the Dead, The Avengers, Jurassic Park, Pole Position, that weird light gun game Aerosmith put out, and so many more. I loved them all, yet I had hardly ever pressed start.

I think anyone with an OLED Vita and Persona 4: Golden will agree with me here: Golden's intro is absolutely gorgeous! Trust me, this "480p" video does not do it justice at all.

The animation is pretty alright, but the visuals are so poppy and vibrant that it's almost impossible not to want to sit there and watch them flow by each and every time you start up the game. I shouldn't even need to mention the music given that Persona music is almost always some of the best in gaming, but Shadow World compliments the visuals perfectly. It's killing me, the happiness.

I don't take kindly to those that can't at least crack a smile from this. You don't like it? Baloney. You keep watching it until you do. You know what creature is least known for smiling? Fish. You are a fish. Stop being a fish, you fish.

Vice City was probably the first PC game I got really into. My computer back then wasn't much, but it could at least play things like Vice City, WoW or Half-Life 2. Taking advantage of this, hours were spent roaming through Vice City and absorbing it's wonderful setting. More than the gameplay, story, or even the music, I remember the blurring neon as I passed by at night and the sun shining against my hawaiian button-up and assault weaponry during the day.

And sniping the moon. That was cool. Oh and hopping to get around, on-foot, in style.

The game's pre-roll captures Vice City from all it's best angles while set to an oh so lovely tune clearly riffing off of Jan Hammer's classic Miami Vice theme. It never ceases to draw me into that fantasy 1980's, where everything is flashy, sexy, fast, and dangerously fun. I can't wait for GTA's eventual return to Vice City. It's just gotta happen.

DBZ is pretty exciting when it's distilled down into a minute and a half of actual fighting rather than several episodes of grunting, backtalk, and powering up before some fighting and then we get half an episode of comic relief from Hercule and the other half Goku is learning to drive because haha he can't drive.

Seriously, I loved DBZ and still do to this very day. I'd say it was my favorite anime if I had seen more anime than DBZ, several episodes of a show here or there and a few films. At one point, I was also really into the Budokai series of DBZ fighters. Next to being Spider-Man, I really wanted to be a saiyan! With me and my blonde hair, I was always sort of half a super saiyan... just without the Galick Guns or the Kamehamehas. Thankfully, Budoaki 1, 2, and 3 were great opportunities to taste what it might be like to be in control of these amazing powers. Sporting faithful visuals and cinematic presentation along with tons of fighters, they were incredibly hard to put down.

The intro to Budokai 3, in particular, I don't remember skipping too often. These days, the music alone keeps me invested. That slide, vibrato-centric guitar melody embodying that warm nostalgia I so crave whenever I think about stuff like DBZ, the PS2 and my many evenings spent alone playing it. Budokai is all three of those things in one sweet package.

C'mon. I'll give you some leeway on Persona 4: Golden and it's infectiously upbeat pre-roll, but you're not about to tell me this doesn't get you way too excited to play Smash Brothers. Those classic sound effects, every cut aims to please, all escalating into the characters clashing with a critical strike and that uproarious narration:

What more is there to say? It's, like, objectively one of the best.

Speaking of some of the best, we have finally come to end with the big daddy of video game pre-rolls: Onimusha 3.

To this day, the CG here has barely aged at all. For a game that released over a decade ago (don't pretend you don't feel old now), that is a beyond tremendous achievement. Sure, most of the facial capture is just a little awkward and the sparse liquid effects look rather cheap, but everything else is top notch. You'd be forgiven for thinking this was a product of the 7th generation.

The coreography, unlike what's seen in the Mortal Kombat: Deception opening, hasn't aged much either. It's actually some of the best mo-cap I've ever seen. Back in the day? Not only did I love it, but I found it so mesmerizing. I'm watching a high quality film here, ma! Look at those slick moves and that pro swordplay! Wide-eyed, I could not bare to look away. That I had a whole game to enjoy after such a display was unbelievable because I was already getting my allowance's worth.

Combining jaw-dropping CG with excellent art and top-tier mo-cap, as well as considering it's age, it's easily the most impressive video game opening I've seen. At this point, I'm starting to feel that nothing will ever top it. Nothing. Ever.

What are some of your favorite pre-rolls/openings? Show them to me! I really wanted to list the original Borderlands', but I was reminded it didn't show up until a new game was initiated. Shame. Don't get intros and openings mixed up like I did!