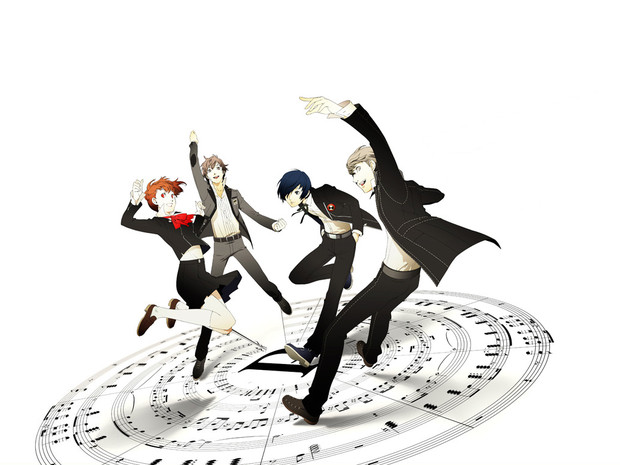 We talk about the story, the gameplay, and the sexy of a video game on the community blogs pretty often, but hardly ever the music. I've had music blogs that are considerably more well-received than my others, but, from what I've seen, only I and perhaps a couple others talk about music at all and let alone on a regular basis. Not even I do that!

It's a real fucking issue, guys. When we neglect music, we get *bile rises* artists like Nicki Minaj or whatever noise was featured in the latest DmC: Definitive Edition trailer (I like wubbystep, but that was all wub and with little to no mind payed to volume control besides "make it super loud"). Unfortunately, sometime during the 90's, the music industry began laxing and realized it was very easy to impress people and it hasn't quite been the same since. We've still had plenty of good stuff, but not nearly as much I'd say.

Around that same time (at least in the US), games like Final Fantasy and practically anything Rare were releasing and doing more than just presenting you with a video game, but a world. To create a world, it takes more than gameplay and a nice idea. Story/characters, landscape building, and, of course, music. Technology was improving, cartridge/disc space was increasing, and developers got more ambitious. Naturally, video game music was only getting better and better.

And ever since 1996, for nearly 20 years, this man has been responsible for some of the best of the best: Shoji "Motherfucking" Meguro. Composer for much of the Shin Megami Tensei franchise of games.

Where most composers tend to stick with maybe one or two genres as their speciality, Meguro has practically done it all and done it incredibly well. Blues, progressive metal, alternative rock, jazz.. metal (?), lounge, j-pop, orchestral, electronica, etc. It takes a tremendous amount of talent to channel multiple genres at all, nevermind for a single project. He may not be the only one responsible for the music (there's "Lotus Juice", Shihoko Hirata, and Yumi Karamura who do a lot of the vocal/lyricical work where applicable), but he's typically credited over anyone else and... I mean, the guy is awesome.

I'm aware of Japan's notorious reputation for unfair or outright untrue credentials, but I would like to think everything's on the up and up over at ATLUS. They've remained genuine and trustworthy in my eyes as a consumer for all these years, so I assume they treat their employees with siimilar amounts of respect.

With that out of the way, how about some brass tacts music discussion, eh?

Holy shit, I need to play the female path in P3P

As with a lot of people, I'm mostly familiar with the soundtracks to Persona 3 and 4. Featuring more than a handful of tracks that are composed unlike most video game music, the spotlight is not only set on the instrumentation, but the vocals. Akin to how most music bands compose their latest work, Shoji and company have now made it practically a Persona tradition to include tracks like Reach Out to the Truth or Mass Destruction during gameplay or story sections.

There's also the theme tunes that everyone (including me) absolutely salivates over.

I think what makes these (and other) tracks so freaking good is Shoji's sick ear for backbone. By that, I'm talking bass and synth/keys.

For the most part, it seems instruments like bass or keys are seen as those things that those "other" band members operate out of necessity. They don't need to be there or they have to be there in some way so here ya go. When I was young, I didn't even understand the concept of "bass" until I got more into music and then, later, playing guitar. I realized how much I used to, what seemed so arbitrarily at the time, change melody in my head according to the bass as opposed to the vocals or the other instruments.

I haven't studied music theory, so a lot of what I say may sound either inarticulate or straight up whack, but I just know I gotta be on to something!

Fucking listen to that bass. Those keys. They ride just as well as everything else (if not better). When you have great bass, keys, percussion, etc. backing up great vocals and melodies, the result is euphoric.

Even when there aren't any vocals, there's always something unique to every track that keeps me coming back. Not just whatever Shoji puts out, something about the music pertaining to the SMT franchise makes me think these guys must really fucking love music and put as much effort into said music as the design leads, progammers, animators, etc. put into the rest of the game.

A lot of other franchises have great music, but nothing like SMT's. It gels with me in a way I can no longer go on describing without simply talking about each individual track and I can go on like that forever.

Shoji had little to no hand in the SMTIV soundtrack, but it's one of my favorites still. The main theme plays like the intro to a quality TV drama/thriller.

Combining technicality, genre-blending, and catchiness with a little bit of personal appeal (there tends to be a lot of progressive or electronica elements throughout even tracks like Time to Make History), the SMT franchise is all that makes music so great and interesting to me. When Persona 5 (FINALLY) releases, I'll be playing it for the music as much as I'll be playing it for the gameplay, immersion, and story. Then, when I listen to the soundtrack rips off YouTube, I won't be just reliving the context(s) surrounding the tracks, but appreciating just how fucking great the music is.

A lot could probably be said about the music in relation to my enjoyment of the other parts of the SMT games, but that's for another time. Unlike most video game music, I don't feel as if I'm necessarily missing anything when I listen to these tracks outside the game. I don't focus on that time I did that thing when this music was playing, I just get lost in that wondrous art of voice and sound.

Play me off, Persona.