If you use Twitter and have any interest in video games, I strongly recommend that you follow Shuhei Yoshida. That man is a prime example of the kind of executive that benefits any industry, with his down-to-earth attitude and clear respect for the people who've gotten him to where he is. Needless to say, that respect goes both ways, as the guy is seen in a very positive light by many in the gaming community.

What makes things even better is that my personal favourite game ever, Ape Escape, also appears to be one of his. He was the producer of the game, and it was clearly a very personal project to him, as he has often mentioned it in interviews as something that means a lot to him. It certainly is something to be proud of

As such, it was through his Twitter that I was recently made aware of the fact that the original Ape Escape team has been having a reunion, and a night of dinner by a really long table. 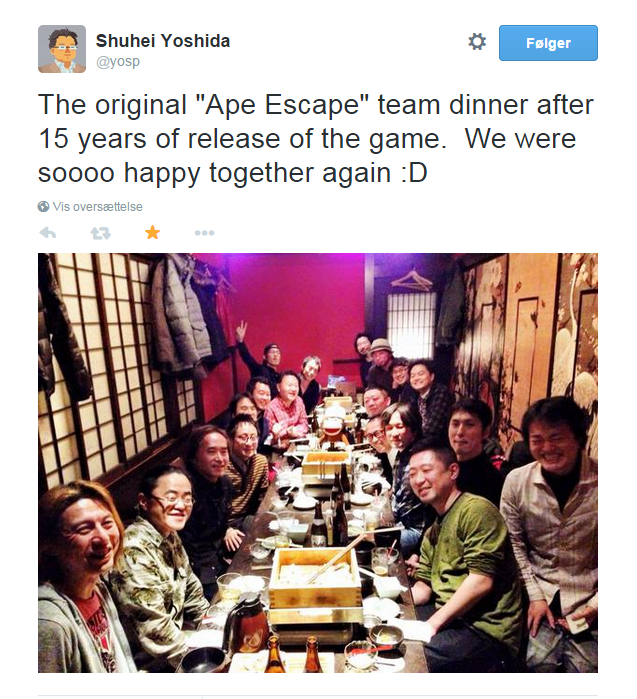 Aside from just being really nice in general, this is insane news to me, as I never imagined these people still being in touch after all those years. The industry has changed so much, but it looks like these people are bound by more their careers. I guess it makes sense, though, considering the passionate product they've created. Everything about this is hearwarming and wonderful, and it really brightened up my day.

That said, this kind of news inevitably comes with a lot of speculation. Looking at the tweet's responses, people are already seeing this as an indication that a new Ape Escape has a chance of being developed for the PS4. This is definitely going to spread over time, no doubt about it, and a lot of fans are understandably going to be excited.

Personally, however, I won't get my hopes up. The franchise largely skipped the PS3 generation, only appearing in a half-hearted spinoff game, as well as an equally half-hearted crossover. Sony hasn't been showing any signs of wanting to do anything with the franchise. They've even refused to release the older games on PSN outside of Japan, for reasons that have yet to be explained, and because of this, I find it very hard to believe that they would allow the production of an entirely new installment.

To be honest though, I'm just happy to see the team being back together, having a good time and remembering what they've created. I wasn't expecting this to happen at all, and it is a very pleasant surprise in itself. These people have brought me and others a lot of happiness, and it's fantastic to find out how much it means to the developers themselves. That revelation alone is enough for me to be very satisfied, regardless of whether or not it's an indication of something larger to come.

I hope the food was delicious!