Majora's Mask is the Groundhog Day of video games!

For years and years, weird people on the internet have been trying to find the Citizen Kane of video games, likely in some desperate plea for acceptance from older generations busy being frightened by Fox News or CNN. You will get no argument from me that Metroid Prime is one of the finest games ever made, but let's be real here - if Metroid ever had a film equivalent, it was the Alien franchise. Comparing it to Citzen Kane is a stretch and I'm saying that as someone that doesn't know much of it beyond "Rosebud" and the slowclapping .gif.

I'm a child of the 80s and 90s. The greatest films of my generation star Bill Murray. Caddyshack, Ghostbusters, Quick Change, Space Jam and Zombieland are just some of the legendary films he has appeared in, at least before women ruined childhoods forever by pushing for an all-female Space Jam film to be made.

Many game developers have valiantly tried to adapt Bill Murray's films into video game form, resulting in Outlaw Golf, Luigi's Mansion, Grand Theft Auto V, NBA Street and Dead Rising. Many of these were hit-or-miss adaptations and no developer really hit paydirt until Eiji Aonuma watched Groundhog Day and thought, "I can totally make a Zelda game about this, but I'm going to have to get Miyomoto really drunk." Thus, The Legend of Zelda: Majora's Mask was born after a lot of his paychecks were spent on saki.

Seriously, though. Majora's Mask is the Groundhog Day of video games. 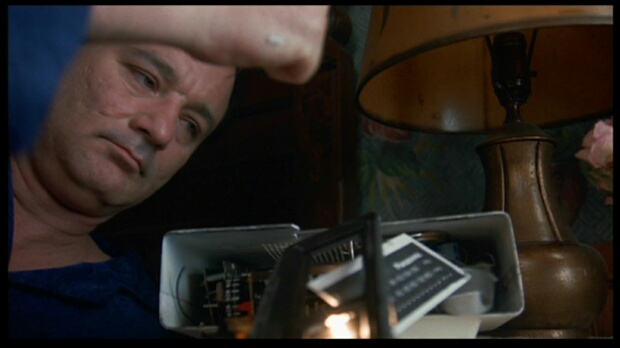 In Groundhog Day, we find a TV meteorologist named Phil living the same day over and over again. What started as an out-of-town assignment to report on the Groundhog Day events in Punxsutawney, Pennsylvania turns into a time loop and Phil is the only person aware of this strange occurance.

I'm going to avoid spoiling too much, but if you want to stop now and watch it before proceeding, you can find it on Netflix or rent it online off of Amazon, iTunes, Youtube or Google Play. It is well worth the three bucks for a rent.

To keep this brief, Phil is a jerk and the movie is kind of a twist on A Christmas Carol - or in Bill Murray's case, Scrooged. Rather than deal with ghosts of past, present and future, though, Phil is going to learn to become a better person through a lot of trial and error within a seemingly infinite time loop. The dude learns French, how to play piano, ice-sculpting and gets to know everyone in town. He clearly makes good use of his time trapped in Punxsutawney. He could have been in there for decades given the skills he picks up.

He does develop a god complex for a short while after a rather self-destructive phase, but he later uses this strange situation to become a better person, to develop a sense of empathy, help others and successfully woo his producer, Rita, into a genuine loving relationship and this breaks the loop. 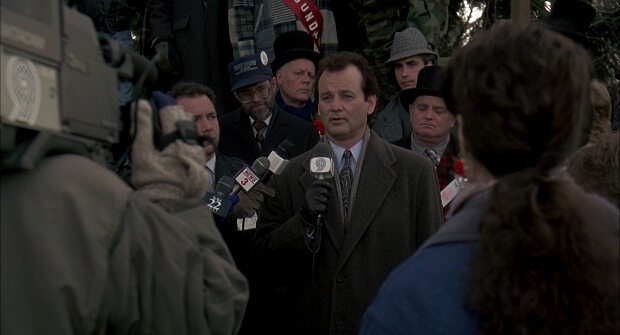 So live the same day over and over, become a better person, help others and become a god - at least for one constantly-recurring day. That's Groundhog Day.

Now, in The Legend of Zelda: Majora's Mask you're Link, so you can't be a big jerk. Fortunately, we have an antagonist for that - the Skull Kid - who now possessses Majora's Mask and is out causing all kinds of mischief and trouble. The game starts with him stealing Link's horse and the Ocarina of Time, then luring Link into one of Hyrule's many alternate dimensions - this one is known as Termina - and then promptly turns Link into Deku Scrub.

That and he's also calling the moon to fall down on Termina.

Big. Jerk. Even Phil wasn't that much of an ass. 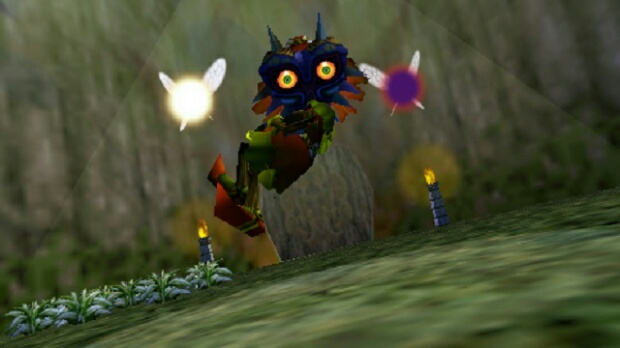 Upon Link's arrival into Termina proper, Link runs into that creepy Happy Mask Salesman, who happened to be robbed of Majora's Mask by the Skull Kid. He sees they have a common enemy and goals, so he tasks Link with reclaiming Majora's Mask in addition to the ocarina. If Link can do this he'll help Link solve that whole turned-into-a-Deku-Scrub problem he's having.

It takes three days of tracking Skull Kid down, but Link gets the ocarina back. Unfortunately, the moon is about to fall on Termina, so he plays the Song of Time to get the hell out of there and finds himself back at the start of the three days. Seeing the ocarina in hand, the Salesman teaches Link the "Song of Healing,' which restores his human form, but when Link doesn't produce Majora's Mask the Salesman is kinda ticked off and insists that Link finish the job.

After he stopped angrily shaking Link and puts him down, anyway.

And so the quest begins. Link will relive these three days over and over until he reclaims Epona and Majora's Mask. In the meantime, he gets to learn all the ins-and-outs of Termina and its people.

What really stood out to me about this game was how each event in the game was connected to the larger story and every NPC had a very deliberate day-to-day routine. While a game like Persona 4 has characters living on schedules, you don't see them lived out in real time or get the immediate sense of purpose that brings. The Elder Scrolls V: Skyrim has characters living out set schedules in real time but "I light the torches at night" or "I do blacksmithing" tends to be the entire depth of many of its characters.

Majora's Mask occupies the middle ground, giving the NPCs the charm and spark they need to carry their daily routine convincingly while not loading the player down with too much talk. 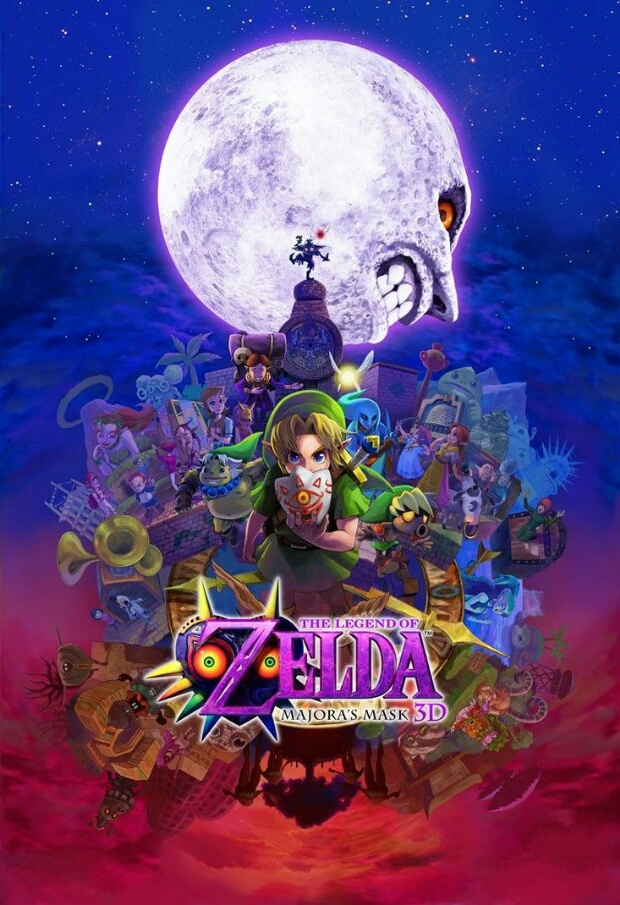 So you will meet and interact with every character on this bit of Majora's Mask art and they will go about their routines as each of the three days progress. It is pretty amazing how detailed the game gets and it reflects the level of detail put into the events of Groundhog Day. Once you get to know these characters and the reasons behind their routines, their presence over those three days feels less repetitive and more meaningful.

Each of the characters In Majora's Mask also have their own problems, from the childish mischief of The Bombers to the anxiety and urgency the Postman feels despite his dutiful image to everyone in town. What's more is that as that dreaded, leering moon looms in closer and closer over the three days, many of these characters' dispositions will change as well. Some will despair, lose hope or drink themselves stupid as that moon inches closer and closer to bring them oblivion.

And where most Zeldas make the people of Hyrule secondary to poking around dungeons, Majora's Mask does the direct opposite with Termnia and its people. They reduced the number of traditional dungeons to four in favor of making the world of Termina and its people the bigger puzzle to solve. That said, those four dungeons are possibly the most mind-bending of all Zelda games out there.

That's its own subject, though. More than beating any dungeon your mission is to bring these people hope again - and to stop the moon from killing everyone.

So, yes, like Phil, Link will get to know Termina intimately and gain numerous new skills, though in this case its transforming into a Deku Scrub, Zora or Goron and collecting masks to solve various problems. Link gets to to learn play horns, electric guitar and drums, too.

Oh, and he also becomes fierce diety as a result of doing all of this.

Live the same three days over and over, help others and become a god. Sounds familiar.

A certain someone also becomes better person and is redeemed. Link was already a good guy, but here he proves once again why he's the Hero of Time and, personally, I think he's a bigger person here than he ever was in Ocarina of Time. I'm not saying that because he gets the Giant's Mask and goes Godzilla on a boss.

Majora's Mask is the Groundhog Day of video games. I rest my case.

Now, if you'll excuse me, I have a creepy mapmaker to go punch. He gets a little too excited about meeting little boys dressed in green. 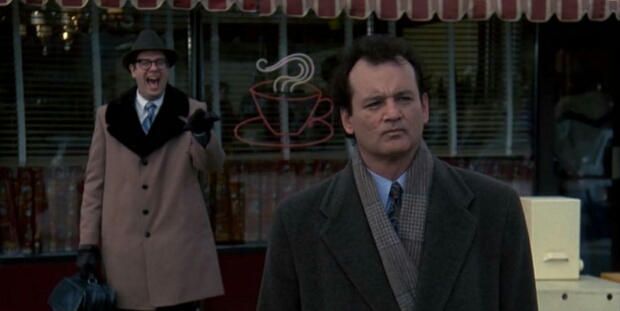