Last year's Alamo City Comic-Con was my very first convention experience. It was loud, exciting, life-affirming, all around nerdy as fuck and awesome. I wasn't preparred for the fun that I would have and I wanted that fun to continue whenever possible. The kind of fun that would fuel my day better than any breakfast. Possibly unless that breakfast was exclusively bacon. A lot of bacon.

When it was announced some time ago, the idea of a PAX South had me even more ecstatic than the weeks leading up to Comic-Con. More than any other facet of geek culture, I likes my video games. They bring me into fantastical fictional worlds effortlessly, like no other medium. I love getting lost in a good RPG or shooter, or sinking my teeth into the mechanics of the latest indie craze. I've also never really had the opportunity to get the inside scoop on upcoming releases, always wondering what it would be like to be on the other side for just one day.

There was a sizable barrier to break through, though. The fact that this was no Comic-Con. I needed to put myself in the right head space to get what I wanted to get out of PAX South. With no autograph signings worth mentioning, not nearly as much cosplay, no panels worth actively seeking out and no interest in the competitive scene, it would come down to whether or not I could find enjoyment in something far more modest than what those attendee statistics and gigantic convention halls would imply: Game demos and chatting with the people behind them.

Most of my first couple hours were spent whoring myself out at the vendors and snapping up whatever cosplayers I could find. Suffice to say, it took me long enough to snap out of the funk I was in and just play some fucking video games. But, when I did, that's when the happenin' began to be happenin'. 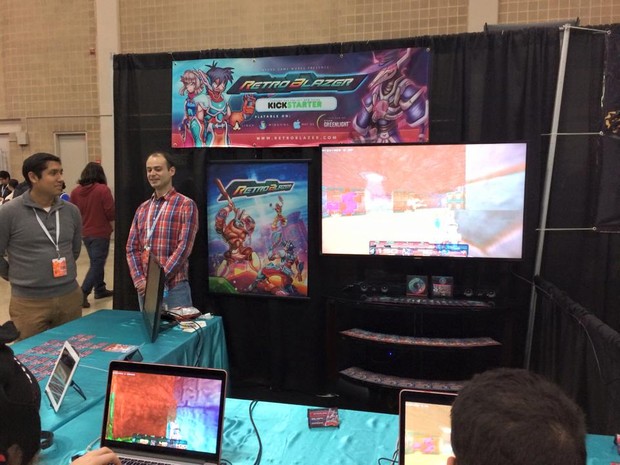 As someone who, recently, has been mostly dealing with his backlog and hasn't had much motivation to keep up with the slew of new indie... news, PAX South was a godsend. I now have at least several additional upcoming indies on my radar and I may even purchase JumpJet Rex later today! That was a fun one. It was hard resisting the urge to mention to Mike Gaboury that it heeeeavily resembled Flappy Bird, until he said it himself.

I like that. He's knows exactly what he's doing and isn't trying hide it at all. 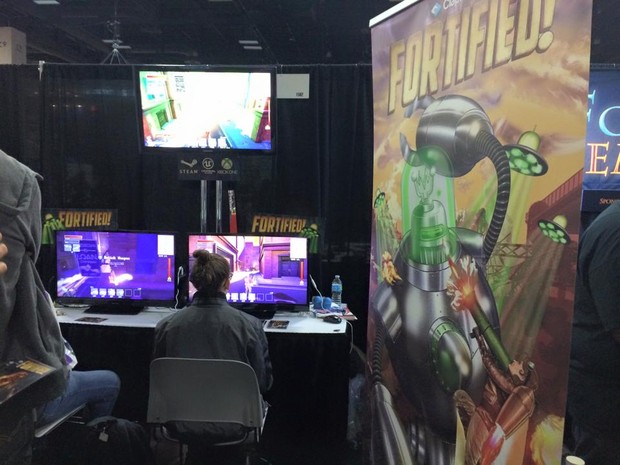 I believe Fortified was the first game I came across that enticed me to chat with the developers enough for what went down to be considered a conversation. I don't know what it's like for every developer, to be told that "Your game is a lot like [x] with a little bit of [x]!" rather than saying it's very special in it's own way, but these guys, much like Gaboury, had no trouble admitting that they were essentially making Orcs Must Die with 50's Americana.

The intentionally simplistic enemy designs reminded me a lot of Earth Defense Force. A chasy, claw arms, a bulb at the top, tall legs... you want a giant robot? There's your giant robot. Nothing fancy, and I love it.

"No relation to Epic's upcoming Fortnite?", I asked them. "No. But, we are using Unreal 4!". Nice. Here's hoping for a PS4 release (currently slated for PC and Xbone), where I do a lot of my indie nonsense these days. 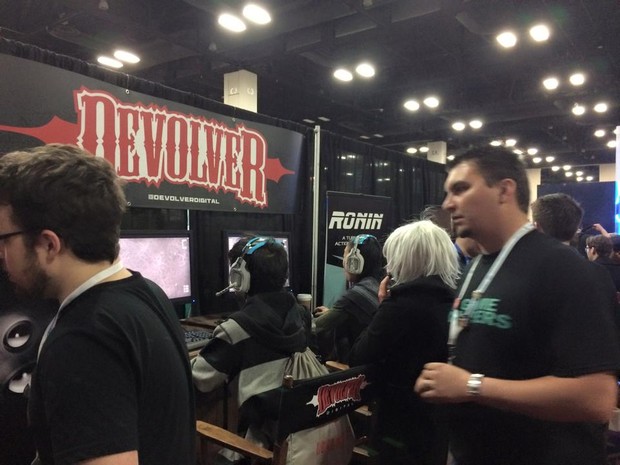 As far as quanity and quality went, Devolver had both in spades. More than any other booth, hands down. Titan Souls looked sweet, Enter the Gungeon played tremendously well, Hotline Miami 2 seemed like more of the same that many loved (I, personally, wasn't a fan), and The Talos Principle still looks amazingly interesting.

If Broforce ever gets Vasquez, know that it was totally all me. But, I had my longest chat with one of the people behind The Talos Principle. It was goddamned intimate. We talked at length about his involvement with Serious Sam, why I should look into The Talos Principle, etc., but all that was as much me as it was him.

He, himself, though, honest-to-goodness, insisted I wait for a Steam sale to purchase it. He implored that it wasn't that amazing that they could both tackle a cheesy action-shooter and an intelligent, methodical puzzler and do them justice. "We're just passionate about making games, man. Nothing special.". Bullhonky. Read between the lines a bit, man! He was the most modest person I had come across in a long long time. Regardless of how he truly felt on the inside, the man deserves to flaunt a bit.

It was also interesting to hear that a lot of the mechanics in The Talos Principle were initially apart of Serious Sam 4 "to give you something else to do". My brows perked as I told him "Well, that doesn't sound very Serious Sam." as politely as I could have. He agreed, so he and (assumedly) others pushed for a whole separate experience with these parts. That was when The Talos Principle was born! 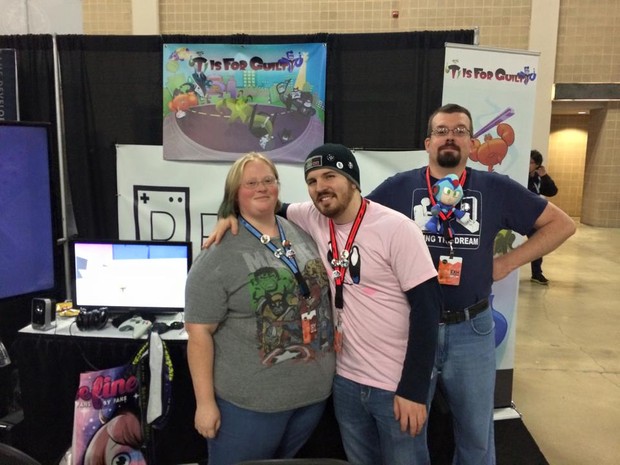 There was one game, though, that impressed me beyond any sort of objective basis. It was incredibly rough, but it had potential and a tremendous amount of charm. The developers were also a very humble and adorable bunch. The above picture, for me, pretty much embodies "indie gaming".

Periodyc Studios' T Is For Guilty is a title I hope you all keep your eye on.

The main protagonist, he's got "classic, lovable" down to a 't'. In fact, that's exactly what he is! How can you not love a character that is literally a capitol 'T'? He's like Rayman by way of Mavis Beacon.

There isn't much to go on as far as gameplay. As I said, the game is very very rough. It really takes playing what is there to "get it". Once you begin making this feller move and punch through the air like Guacamelee's Juan along to the cheeky jazz soundtrack, you fall in love. Or, at least, ideally. I certainly did. It's character design speaks to me in a way I can't describe.

I am very very glad to own this lovely poster: 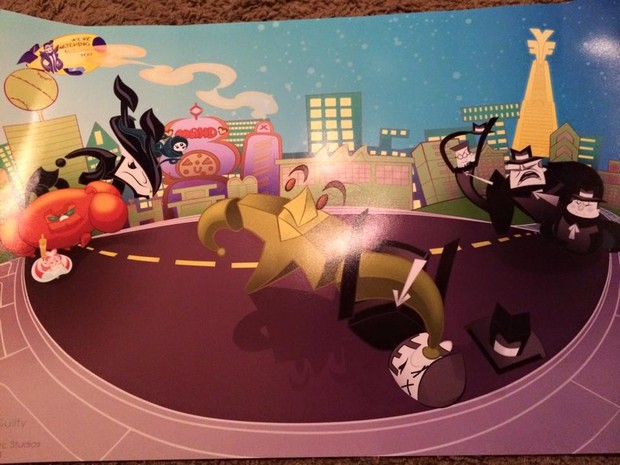 The demo I played didn't even have a proper "end". You simply couldn't go any further. That's how rough it was. But, I can't deny I was taken by it.

Make a Sticky Note to stalk Kickstarter for whenever their's goes up. To be frank, I can't imagine it getting too far with the build it has and some cute concept art, but I hope to be proven wrong. I mean, I really wanna be proven wrong! These guys need to evolve the game to a point that even halfway capitalizes on it's potential.

It was booths like this and Devolver's that gave me a newfound appreciation for the indie scene. I wanna give them all a big hug. 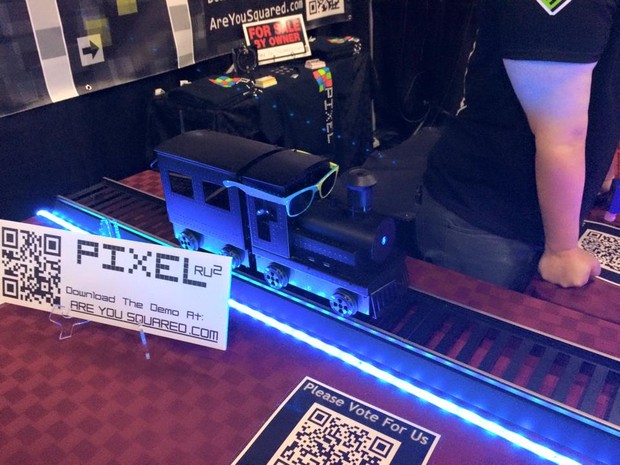 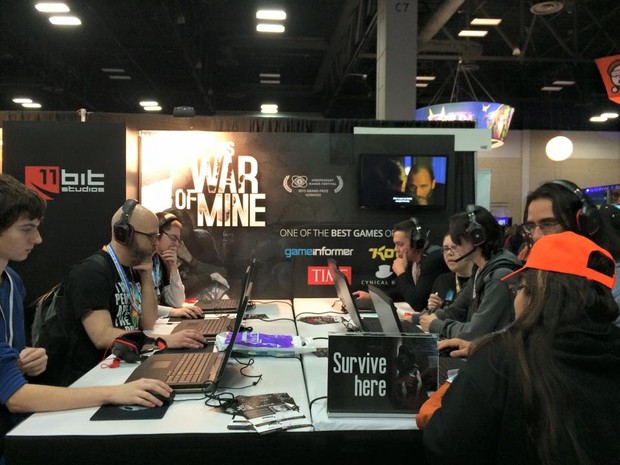 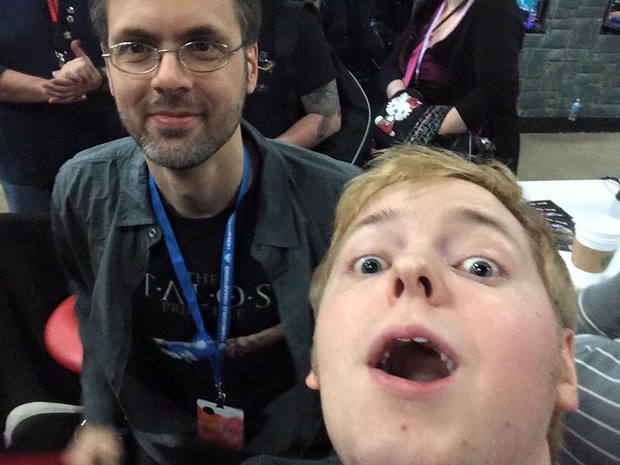 Between Alamo City Comic-Con and PAX South, I have become a con junkie. I never saw myself as that sort of person, but now I can't imagine my life without 'em. They accentuate my love of being a total nerd to levels indescribable and I get to meet all sorts of interesting people, both eccentric fans and developers.

Like I said with my last con blog, if you haven't already and if you want to go even just a teensy bit, you owe it to yourself to. It will give you lots of good feelings. 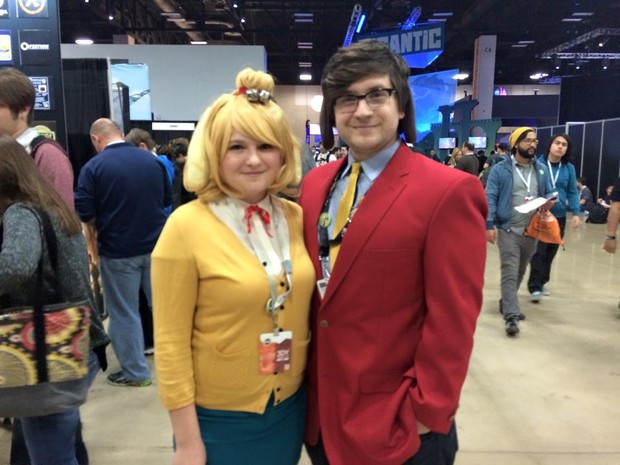 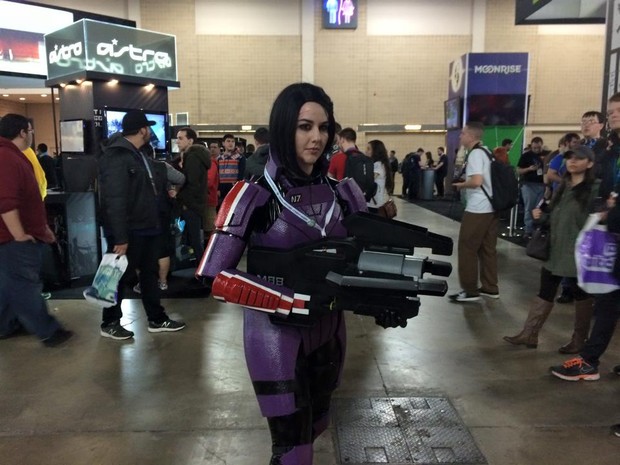 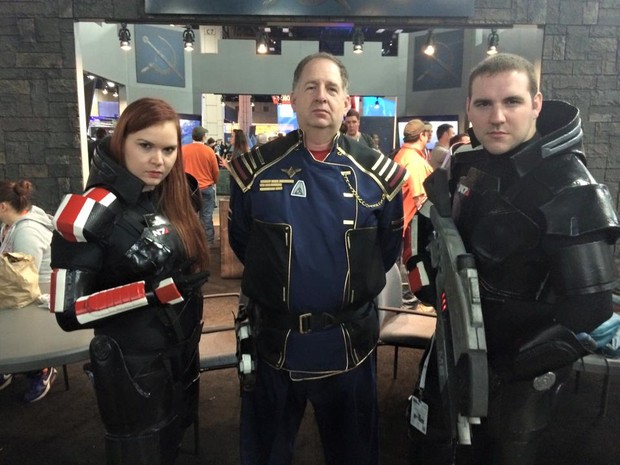 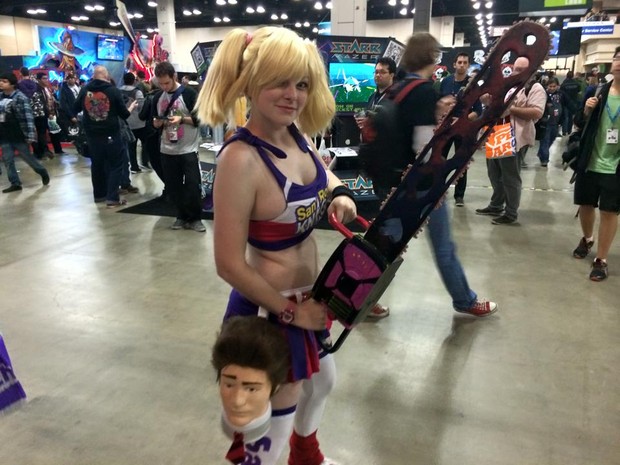 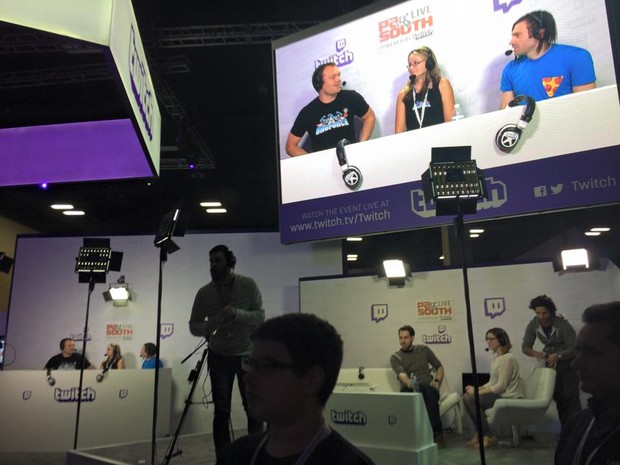 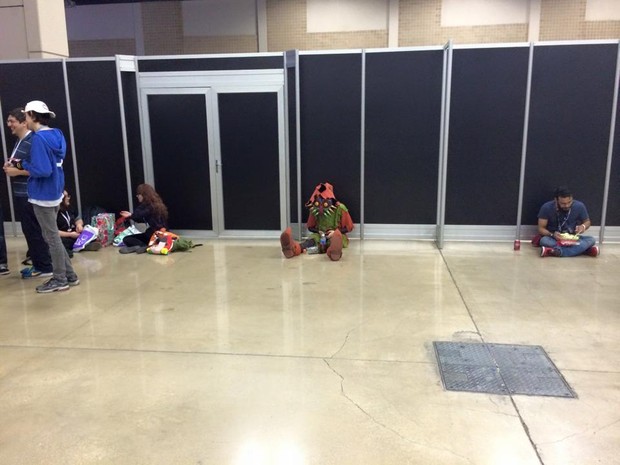 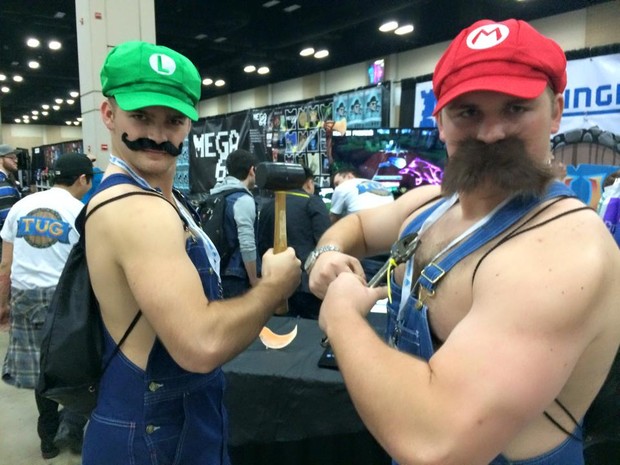 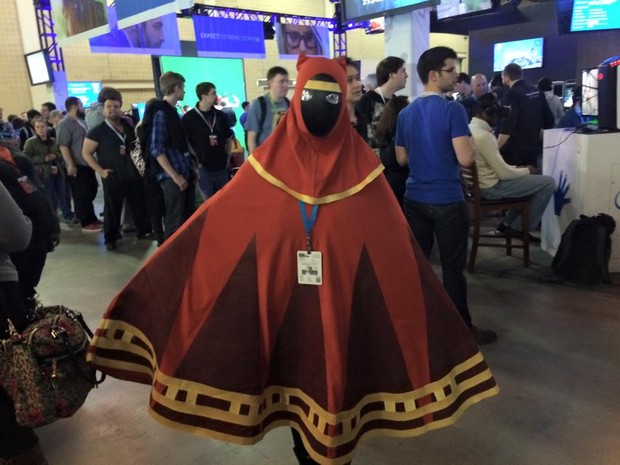 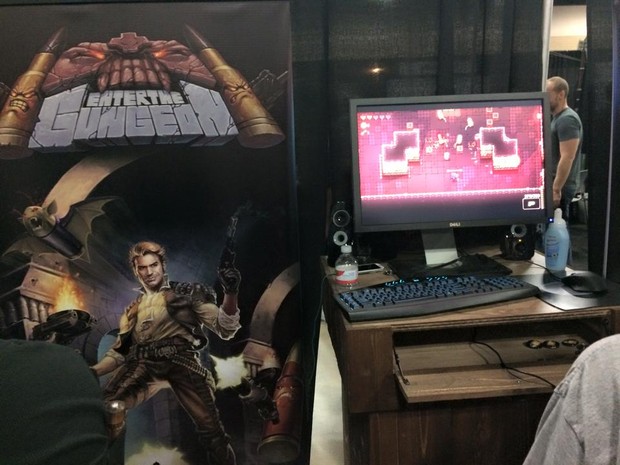 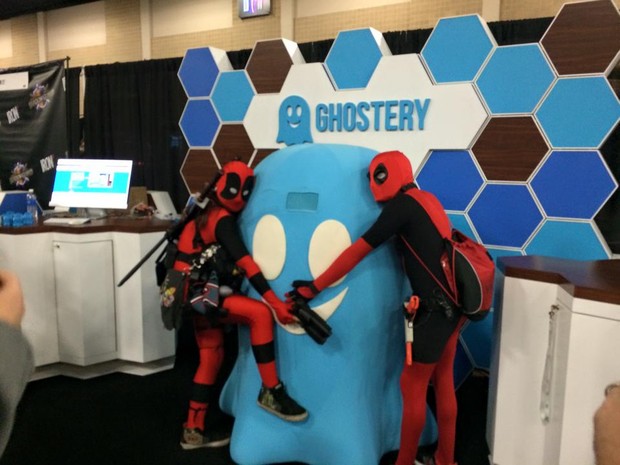 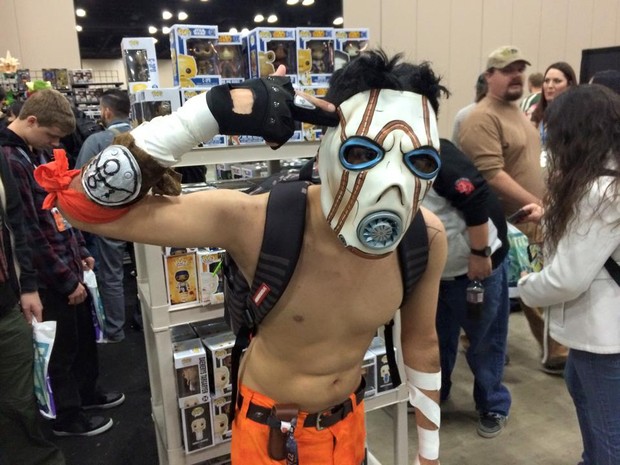 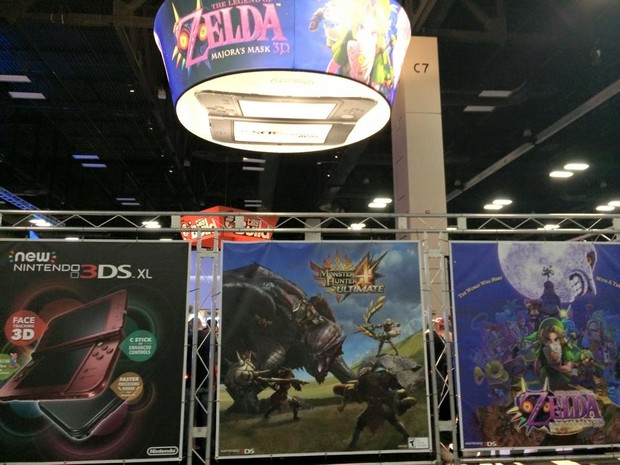 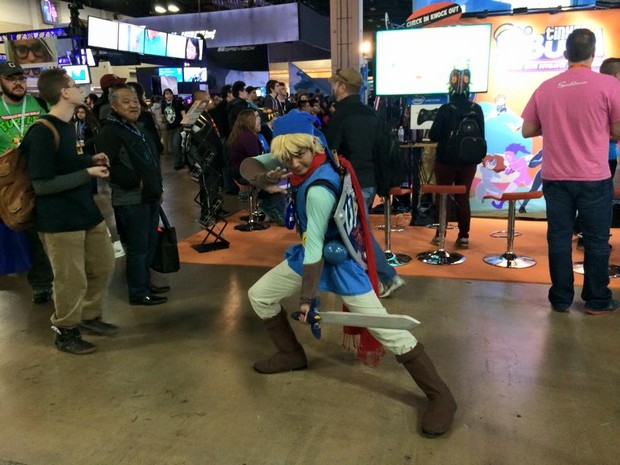 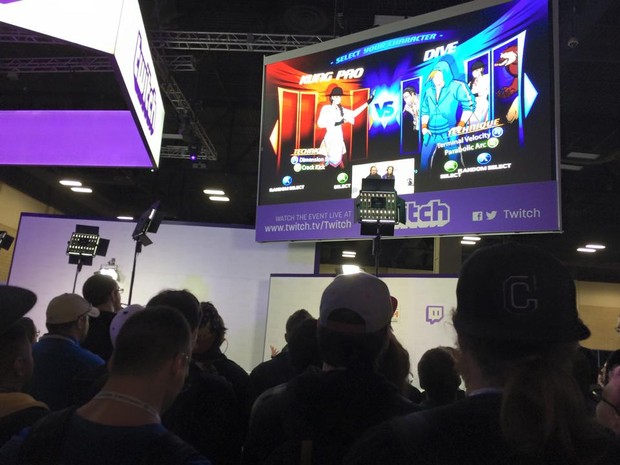 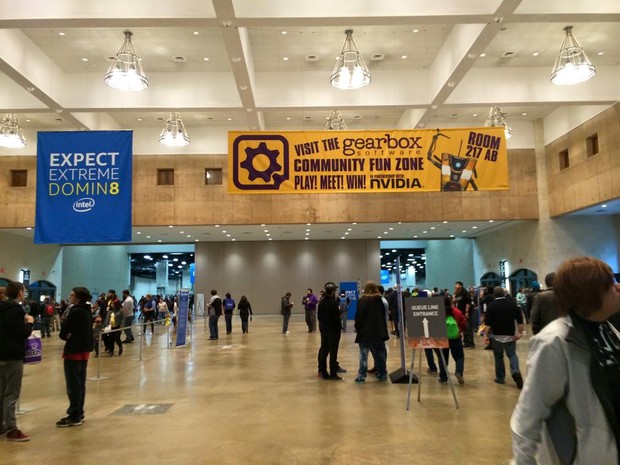 Also, to prove that I can look considerably less stupid than I do in that selfie, here's a test shot I did a few days ago of a James Sunderland cosplay I almost completed in time for the con, but noooot quite: 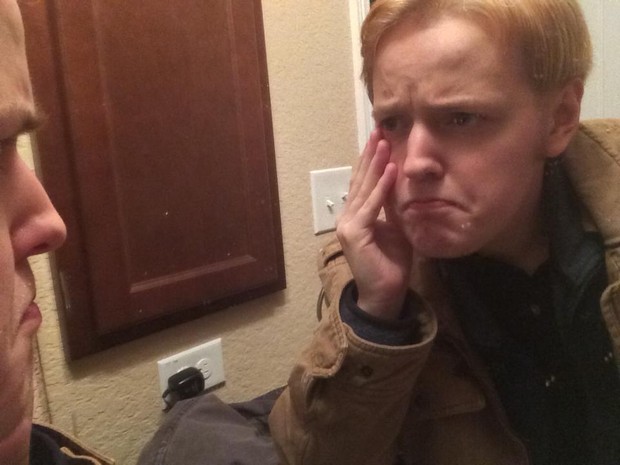 Still needed patches and an appropriately-colored jacket, but it's basically there!