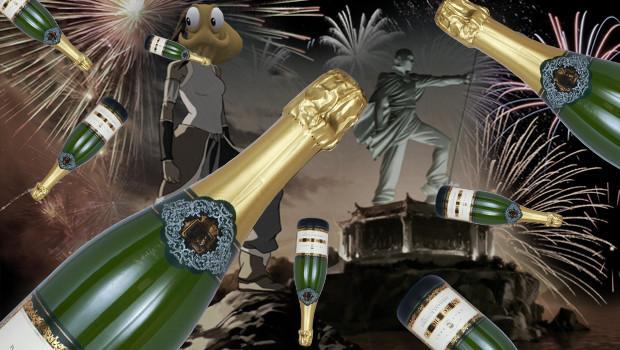 A lot of people have been writing big, ballin blogs about the games they've enjoyed in the year 2014, which have mostly included games from that very same year. I like following trends, so I've been wanting to make one as well. Only thing that's keeping me is one itsy bitsy problem. One hair in my soup. One splinter in my left buttock. One rock in my croc. One croc in my otherwise presentable collection of footwear.

I only played Octodad and Korra.

I am totally fucking serious with this one. The only games I played during 2014, which also happened to be released this year, were Young Horses' Octodad: Dadliest Catch and Platinum's The Legend of Korra. No Wolfensteins, Far Crys, Bayonettas or Mordors. How do I even get around the house with no Mordors???

Guess I'm just too cheap to dish out the high price of a new high profile release, so when something competent looking and affordable comes out, I turn my attention (and wallet) towards it? That said, I certainly wish to play most (if not all) of the games mentioned at some point, but it probably wouldn't hurt economically to wait a bit longer. I did buy and play plenty of older games during the year, so that's nice. But for making a list of my favourite 2014 games, it obviously won't do, so I'm stuck with a list of two games. Bogus, sure, but I'm gonna try and compare the two in a desperate effort to make it a bit more interesting. Not that it will be that long either way.

Octodad: Dadliest Catch is a game about a totally normal guy who hangs out and chills with his family a lot. Or so you think! You see, there's quite a bit of a twist near the end that I won't spoil, but it will blow your mind! Anyway, the game is basically about performing normal, simple tasks without fucking everything up. Then the developers realized that the game was way too easy, and decided to make the controls impossible. As a result, even taking a few steps is intensely difficult.

I really like this game's originality. While games like QWOP and... CLOP... have done similar things in the past, this is far more ambitious. There was technically another Octodad game before this, but that one felt more like a proof of concept than anything, while this one is definitely going to be the one that people remembers the most. It helps that it has a really catchy theme song.

Oh, and the collectible ties will take forever to find, so replay value!

"ALRIGHT THEN, HOW BOUT KORRA!?"

The Legend of Korra is a game about the world's most dangerous fantasy eskimo, who has the ability to control the four elements through different types of dancing: the swift wind of the breakdance, the cool waters of disco, the rocky stiffness of the robot and the fiery passion of salsa!

Korra is the name of our main character (we sure have come far since 1986). One day, a gang of generic bad guys take away her ability to be Super Jesus, making her more like me, who doesn't have super powers. As it turns out, being like me is simply unacceptable, and Korra is now going out of her way to regain her extraordinary super powers that no one else can have at the same time.

Bosses were kinda lame. I know that's kind of a sudden thing to jump to, but it is my biggest problem with the game by far. Had the bosses been more fun, varied and personalized, I may still have been playing this. Another lame thing is that the elements don't feel that different. Like, why does the air do direct damage, rather than blow enemies away? Why doesn't fire actually set things on fire? Other than this, however, I think it was a solid game. A half-swank, at least.

"OKAY, SO HOW DO YOU PLAN TO COMPARE THEM?"

Oh wow, way to put me on the spot, voice in my head!

I guess one way is to look at their budgets, as both of them were obviously low. What's interesting is that this comes through in different ways. While Octodad has very low-poly character and object models, Korra has better models but blander environments. Overall, I think I prefer the former approach a good deal more, as I find it far less noticable while actually playing.

But, honestly, that's just the tip of it. Looking at the amount of creative ambition for each project, Octodad curiously enough still seems to come out on top, despite being far more simple in both concept and execution.

See, you won't expect a game like Octodad to have a detailed backstory or a big climax against a threatening villain, but from Korra, with its epic fantasy world and mysterious lore, it's not extraordinary in the slightest. This means that, based on expectations alone, Octodad is the one that overdelivers, while Korra comes across as pretty tame. I honestly think this represents both games pretty well in general. I think Korra could have been so much more than it was, and I'm not sure I could say that for Octodad, should it not have turned into a completely different game in the process.

I guess, by default, it means that Octodad: Dadliest Catch is my favourite 2014 game, while The Legend of Korra is my least favourite. But hey, two games. Who cares? In the end, I had a good deal of fun with both, and I certainly don't regret buying either. Besides, the benefit of only playing two games is being able to do slightly more in-depth stuff that wouldn't usually make much sense. Had it been one game, I might have done a more complete review of it instead. That, or something way lazier.

Hey, guess what? I'm not having champagne this year, as I'm apparently not High $ociety enough for the stuff (or the store didn't have it, one of those reasons). Instead, I'm having crémant. Makes me wonder how many people actually drink champagne New Year's eve, compared to those who drink stuff that doesn't count. It's probably a minority, but the world is full of super ultra nubs who don't know the difference. The tiny, insignificant difference.

So with that in mind,

Happy New Year, Champagne, Crémant, or whatever else you plan to pour into your face!