9 Games with Holiday Spirit (for any and all December holidays)

Merry Christmas damnit! It's the time for the holidays. Snow, presents,  A Christmas Story being played 50 times a day, its a sign of the season and for the first time in over three years, I'll actually be state side to enjoy the Christmas festivities with friends and family in the US.

Since I'm in the holly jolly spirit, and didn't really play enough new titles in 2014 to make an adequate "best of" list, I've decided to look back at some of my favorite games that captures the spirit of the season. This could be a game with an excellent snow level, great holiday theme or holiday related cameo or bonus. As always, since I haven't played nearly enough games that I want to, some favorites or popular choices may be left off the list. Don't be a Grinch, just leave a comment below on what are your favorite games that capture the holiday season. . 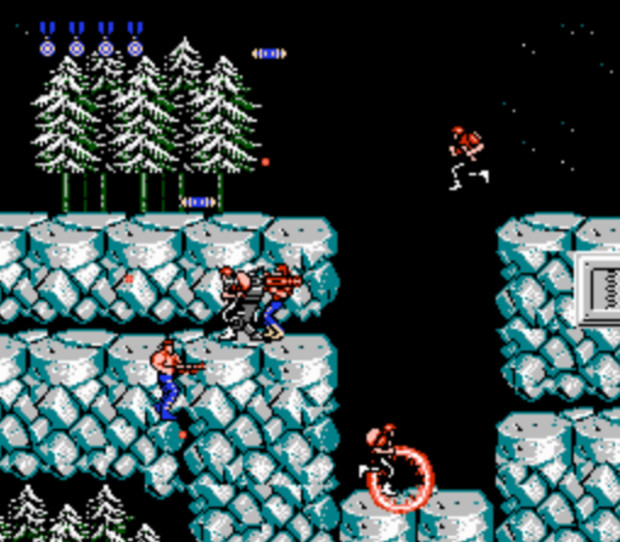 9. Contra: Stage 5 Snow Field - The wonderful thing about Contra games is that despite their limited graphical capabilities, they succeeded in delivering non stop, thrill a minute action set pieces that rival most modern scripted set pieces in games. Stage 5 was no exception. With the pitch black night sky above you, you start out running through a forest, gunning down soldiers and dodging mortars raining down overhead. It all comes together with a mid level boss straight out of Mad Max and a final boss that has you battling metallic UFOs. Stage 5 is the video game snow level with a shot of adrenaline. 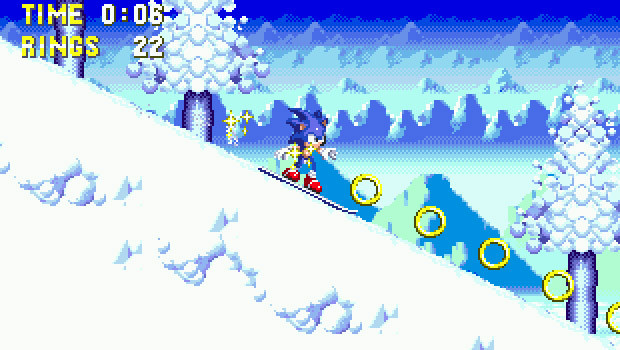 8. Sonic 3 & Knuckles: Ice Cap Zone - Going with the theme of exciting snow levels in games, Ice Cap Zone is another snow themed level that gets the blood pumping and your knuckles wrapped around that Sega Genesis controller (or whatever 50,000+ consoles that this game has appeared on over the years). Most platformers have you beginning the level slowly, attempting to get you used to the new layout and setting. Sonic 3 & Knuckles skips all that and throws you into a snowboarding segment as you careen down a steep hill, finally crashing into a pile of snow before the level even starts. To go with the action is the Ice Cap Zone theme, arguably one of the finest songs in the series, that perfectly matches the frantic  and frigid nature of the level. In a game filled with near perfect level design and music, Ice Cap Zone will always be the level that defined classic Sonic for me. 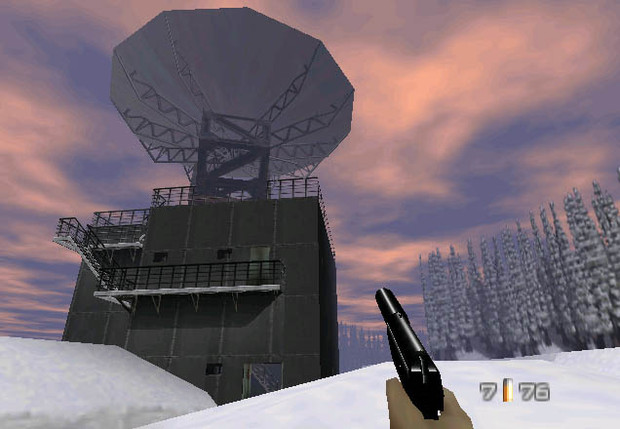 7. Goldeneye 007: Surface 1 and 2 - We all know about Goldeneye. It's one of those games that's become the Star Wars or Wizard of Oz of gaming, every one who has ever been interested in playing games has played it, heard of it or played parts of it at one time or another. Goldeneye did a great job having a variety of different environments that greatly differed from the last one. Surface 1 and 2 are standout levels as they seemed to be the largest ones in the game. No longer confined to hidden bases and hallways of military chemical plants, Surface put you in the middle of the snowy Siberian wilderness as you crossed snowy hills to take out unsuspecting guards and sneak into the central point of the level, the huge communications tower. While both stages are essentially similar, their layout and objectives differ between the two with the first Surface focusing more on sneaking and the second Surface focusing on sabotage and searching for intelligence. Both stages offer a great ambient soundtrack that gives off a serious, yet calmly serene and peaceful background as you silently snipe Russian soldiers. 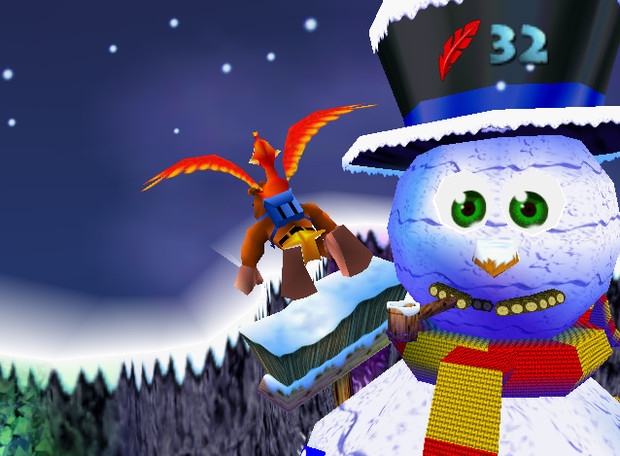 6. Banjo Kazooie: Freezeezy Peak- Another Rare game. Another great example of level and sound design in gaming. Freezeezy Peak continues the trend of making environments that makes players want to explore and discover rather than force players down a checklist of objectives to accomplish. Everything about Freezeezy is memorable with its colorful winter and Christmas themes and clever design that took you through the entire level. Fighting snowmen, flying around Christmas trees and racing on sleds captured the spirit of the holiday season and snowy weather that makes those childhood days of playing in the snow and waiting for Santa so memorable and special. Those memories to a child are epic, larger than life, something that this level emulates to even the most jaded gaming soul. 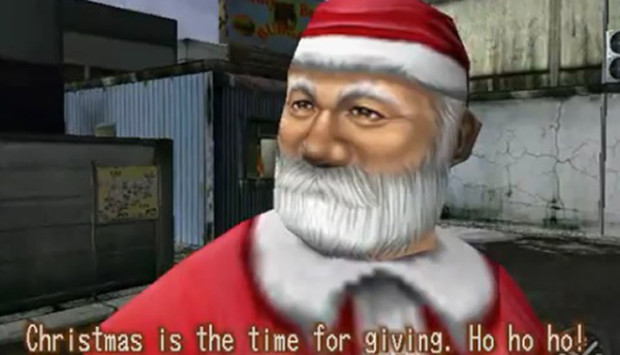 5. Shemnue: Santa Maeno- True Story. I was playing this game one Christmas Eve, having a blast, thinking that the game couldn't possibly get more in-depth or immersive as I turn the corner and see Santa standing there. While this Santa was more interested in pointing you to the best bars in town, and then quickly expressing his disappointment at your lack of appropriate age to enjoy these fine liqueurs, it was a surprising and cool nod at adding an even deeper level of immersion to the game and reminding us that even in a fictional version of 1980's Japan, the holidays still exist. 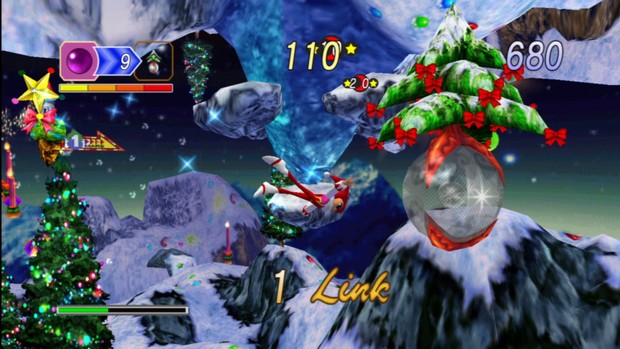 4.Christmas Nights into Dreams: The Whole Game- While admitedly little more than a re-skin of the first portion of Nights, Christmas Nights took the already whimsical atmosphere of the original game and gave it a complete Christmas makeover complete with candy canes, Christmas trees and Christmas lights.Flying around in these Christmas themed environments with the cheerful Christmas tunes in the background really made a for game that captures the warm holiday spirit. It's become a tradition for me to play this every year during holiday time, its the equivalent or eating a plate of sugary sweet Christmas cookies; colorful, sweet, and best enjoyed during a specific time of year. 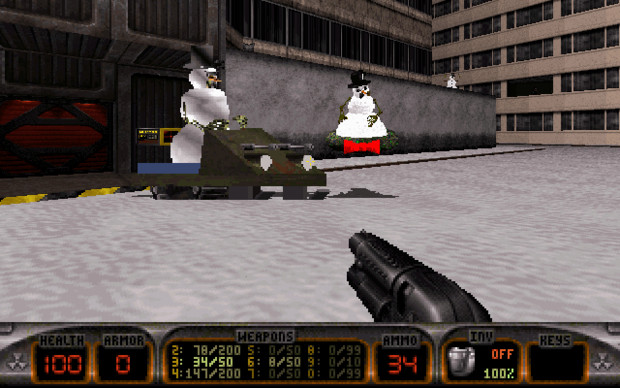 3.Duke Nukem 3D Nuclear Winter: Shooting Elves and MIDI Christmas tunes- Out of all of the official add-on mods to Duke Nukem 3D, this is the weakest one with reskinned levels and little new in terms of enemies and weapons. What made this expansion memorable to me however, were the MIDI Christmas tunes that played in the background while you blasted away at enemies and dropped one liners.

I always associate MIDI Christmas music with the early 90's, when the internet was a new thing and the novelty of sending an e-Christmas card was an exciting discovery. Along with games like Goldeneye, Duke Nukem was some of my earliest memories of FPS gaming and all the controversy that came with it. I guess when you combine that with early memories of sending  Christmas e-cards through Netscape, it crosses the wires and tickles that nostalgia bone. I'm pretty sure this will only make sense to a small number of people, but this expansion never fails to take me back to my younger days of Christmas and gaming. 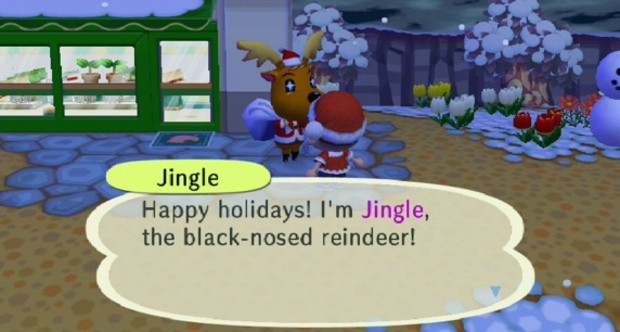 2. Animal Crossing: Christmas Eve- Animal Crossing always managed to make me care for my virtual town and its residents, and when the holidays came around, I always made sure to spend some time with my virtual friends. Christmas Eve was always my favorite time in the game, with lights on the trees and snow on the ground, walking around your village would eventually lead you to Jingle, the Santa costumed reindeer that would give you holiday themed clothing and furniture. Like Banjo Kazooie earlier on the list, Animal Crossing managed to take the most mundane activities we face everyday and turn them into something interesting by making an environment and cast of characters worth investing in. Christmas time in the Animal Crossing world is like Christmas with the family, and that's something few games can ever claim. 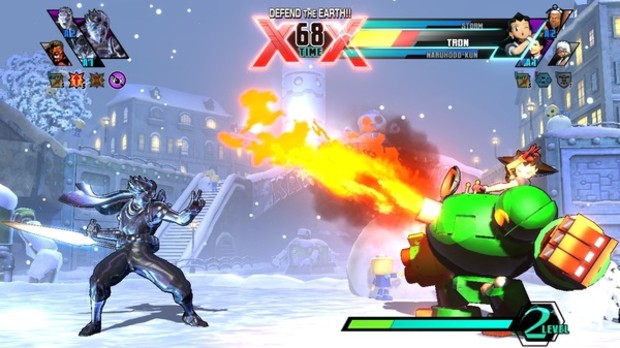 1. Any Local Multiplayer Game: Playing with Family and Friends-  Any holiday gathering instantly become more interesting and more entertaining when playing game with friends. whether its a round of Mario Party, a CS Lan match or some bonding over Smash Brothers, local multiplayer games have always been a staple at my family gatherings and is something I don't see dying out any time soon. There something about gaming with the ones you care about most that elevates a gaming experience into something magical and memorable,making for stories of last minute wins and epic comebacks destined to be told and re-told for many more holidays.

That’s all for now. I hope this last made some of you feel warm and fuzzy the way it did for me. No matter how or what you celebrate, I hope you all have a wonderful holiday time filled with some quality gaming memories. 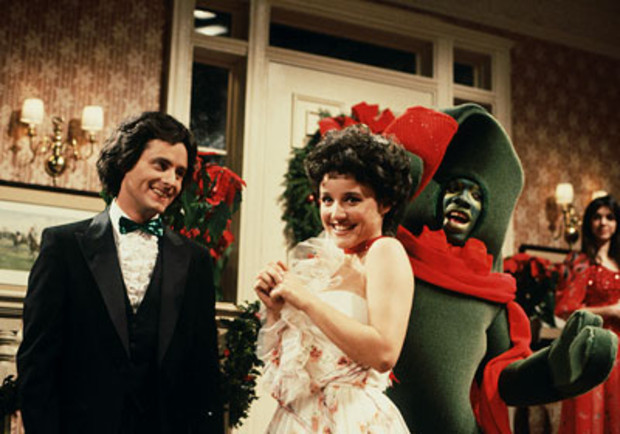