A Follow-up and Inquisition Impressions 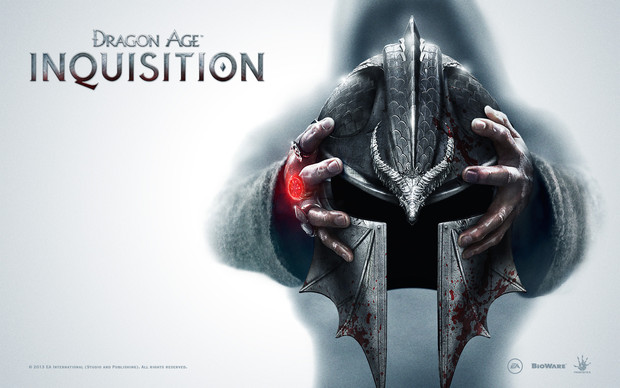 It wasn’t too long ago I wrote, in haste and in brevity, about my unfortunate dealings with a terrible, awful person on Steam. After publishing that, I was contacted by a dear friend who told me not to worry and check my mail in a few days, which I alluded to with my edit. Basically, something good came of it anyway, and here’s the result: 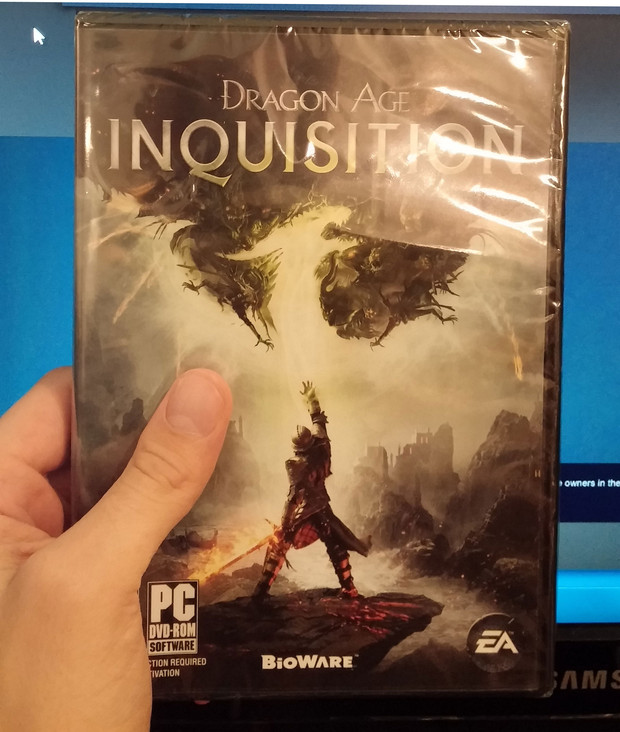 Thank you for the gift!

Yes, I was sent a copy of Dragon Age Inquisition, the very game I’d been scammed out of in the first place.

The gesture was humbling.

I was horrified, of course, that my friend felt compelled to compensate for the travesty, but I was assured they did it because of their love for me and that they’d just received a raise in their salary that very day, causing a great deal of “good mood” vibes to emanate from them. I slept well that night, and I’m glad, because I thought I’d be stewing over my idiocy all night long. It also goes without saying that everyone’s kindness towards my mental hiccup because of my on-going illness also helped ease the immediate pain. Thank you and I love you all.

After playing for around 10 hours in total, I think I can give a few impressions to share with everyone.

I created a Male Qunari Mage. I don’t normally play a mage, but I thought it might be fun to change up my normal creation of a massive warrior, an unstoppable sword swinger that hacks the limbs from friend and foe alike, and run with the idea that magic casting isn’t exclusively for Harry Potter fans.

The character creation is pretty robust in that it allows tweaking of various facial features, enabling the player to create some monstrosities, but also giving freedom in creating a very unique looking individual. And it works wonderfully, too, with very precise and visible changes for the eyes, nose, chin, neck, ears, and so on. It’s simply magical to play around with a great character creator. Unfortunately, the ability to tweak any other parts of the body is, for whatever reason, unavailable to the player. This is a baffling decision, but I actually think I know why, which I’ll get to in a moment.

So my Qunari mage is created after about an hour of fumbling and tweaking, creating a caring and slightly menacing looking giant of a thing, horns properly jutting from the sides of his head. I even got to choose his voice, which I was happy about, as sometimes I tire of everyone having British accents, despite thinking that British people sound much smarter than I imagine all of them actually are. I went with the North American voice because I’m North American, and I’m now my video character in proper role-playing fashion.

As I’m playing I notice that each and every character I come across looks my character directly in the eyes, something that adds a real sense of two sets of polygons interacting in a realistic way. There’s even a humorous moment where a dwarf is speaking to my Qunari, straining her poor little neck bending it back so far to look me in the eyes. But then it dawns on me as to why I couldn’t tweak my body proportions is because it might cause NPC’s to look at my stomach or at the top of my head or some such nonsense. So on the one hand I get the idea behind it; on the other hand I miss being able to tweak arm size, height, weight, and so on.

After the beginning section, the player is basically allowed to venture off, albeit limited to specific areas.

Still, the Hinterlands – the first area the player is sent to – is quite impressive. In fact, the openness of the area is daunting. I can see on the map where I need to go, but instead I head in the opposite direction because at this point I hadn’t realized it’s more of an open-world game (I also didn’t read much about the game before playing, so this probably won’t be as big of a surprise to most). I wandered and wandered, finding notes left for loved ones, informing them where to meet because of the vile situation happening in their homeland. Most of these notes activate quests in a similar way as The Elder Scrolls V: Skyrim; in fact, if I had to compare Inquisition to any game it would be Skyrim, at least in terms of how open the first area is for the player. Quests are triggered at a steady rate, and still after playing for so long I hadn’t fully explored this first area. I was also quite happy to stumble upon some areas wherein I was severely under-leveled, and the enemies wiped out my party almost instantly.

Exploration is really fun. There are some neat little things that I’ve stumbled across, various “stories” that are told just by being there. One of my personal favorite moments in Skyrim was when I came across a house still smoldering after a fire ravaged it to ash, a burnt-down-to-the-bones man curled up on the ground in the middle of the house, markings on the ground in what appeared to be a cult worship of some sort. I looked at the whole thing and wondered what had happened. I started poking around the husk of the house and found a scroll to summon a Flame Atronach on a table and a book about beginners magic or some such, and then I laughed myself silly because the poor soul had been trying to summon one and instead burned his home down, along with his fool self. Inquisition has similar things in it. I’m purposefully being vague because it’s a brand-new game and I’d rather not spoil it for anyone, but hopefully I’ve done a fine job of conveying the idea. Along with the sense of discovery and exploration there are plenty of baddies to annihilate. This helps the player not only advance in level, but can also directly tie into certain quests. For instance, a random baddie had made off with a woman’s slain husband’s wedding ring (still with me?), no doubt to pilfer it off somewhere for a quick buck, and the neat thing about it is I accidentally stumbled across him without realizing it. I vanquished the sorry looter and was scooping up his loot when my quest indicator alerted me I’d found the woman’s husband’s wedding ring (phew!). 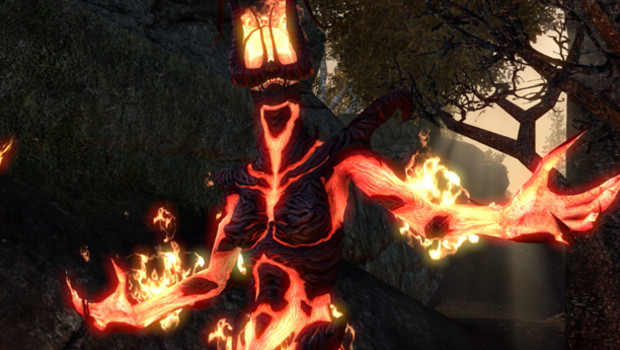 Right, combat – combat is similar to both Dragon Age: Origins and Dragon Age 2. It’s very serviceable and, I think, quite fun. It isn’t as tactics heavy as the first game, and for me personally, I’m glad. I like some micro-management, but not a constant need to adjust my teammates into being competent allies. I’ve gathered that not everyone feels this way, which is fine, but overall I think it’s a fun system. It’s easy to look awesome sending magic bolts of lightning at baddies, electrocuting them and their friends, and mopping up any stragglers with an area-of-effect fire bomb. I’ve read complaints about having to hold down an attack button, but I prefer this style, as it gives me a sense that I’m the character instead of an omnipotent being hovering over them, directing their actions and watching the results.

Now, there is one gripe I have about the whole thing and that’s in the way it controls. I’m very much a keyboard and mouse type of gamer, actively choosing keyboard and mouse when most people suggest a controller. However, for whatever reason, the inputs on the keyboard don’t seem to work very well, and after playing for a few hours this way and becoming frustrated when my character wouldn’t follow my command the first button press, I figured it wouldn’t hurt to plug in my controller. The difference was immediately apparent. The game plays much better for me with a controller. There are certain things I don’t care for using the controller, like not being able to easily access certain menu items (“M” for map, “I” for inventory, and on the controller I have to push “Start”, then choose map or inventory manually), but overall I’d say they’re minor gripes compared to the frustration I was having with the keyboard controls.

Overall this may be disheartening to some because the game should be completely playable with a keyboard and mouse on a PC game, but I’m not one to get upset when I have various options. Still, I concede this simply shouldn’t be the case, especially because not everyone is comfortable using a controller, and not everyone has one or can afford one.

If you remember when I was speaking about character creation I lamented the over-abundance of British accents in these sorts of games, which may have been an over-exaggeration. This silly line of reasoning became a focal point after about 8 hours of playing the game when I suddenly realized how much I hated my character and his stupid North American accent. His lines were so terribly delivered he could’ve been mistaken for Sloth from The Goonies at any moment in time, and not in a lovable way. To wit, his stupid face would say stupid things like, “I see what you’re saying,” while he stupidly and awkwardly stood there, a giant idiot amongst much smarter men and women. I felt both rage and embarrassment for the idiot, despite creating him. 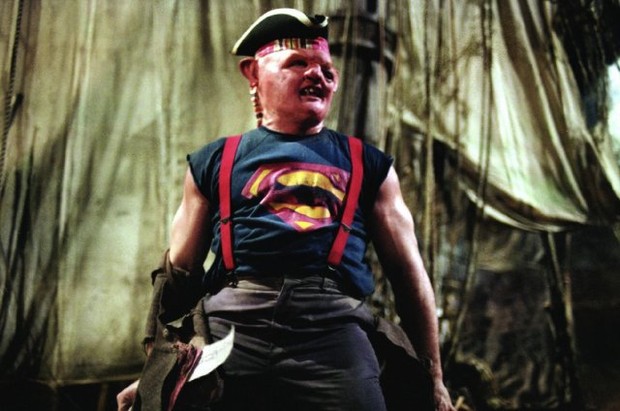 Sloth: loveable, unlike my abomination of a character

I’ve never hated any character I’ve created with such passion.

I debated wasting time to see if Bioware could scrub my save in a way to either change the voice to a more pleasant one (yes, the British one), or replace my Qunari with a better character. Instead I started over as a female with a sultry and beautifully magnanimous British voice. Despite losing my progress I’m quite happy, especially because those 8 hours were mainly getting used to the game and doing various side-quests, only performing one or two main quest missions.

Those are my initial thoughts on the game.

I hope everyone is having fun playing any recently acquired games, especially after the deluge of game sales. Feel free to share what you’re playing or, if you’re playing Inquisition, how you’re Inquisitioning is going.