Giving Thanks: The Miiverse

Though touted as one of the greater evolutions in gaming, I’ve never been a huge proponent of online gaming. Indulging in a game’s world and story is a personal experience for me. The voices and actions of other players, particularly when set against scripted plot devices, tends to dissolve the illusion of immersion. That said, I love hearing about the experiences of others, sharing my own, and helping others achieve their goals. In other words, I love playing games online, just not with other people.

I was once a dedicated World of Warcraft player. This is the only instance in the MMoRPG genre where I felt as though I could truly quest on my own (well, there are some MUDs that qualify as well but WoW is more relatable). I only worked with others when I desperately wanted some instanced dungeon reward and was otherwise content to explore at my own pace. But I loved wandering about and seeing other people doing things, or striding into a capitol city bustling with other players. Though I was a loner, the presence of other players made the world feel alive.

I was actually in a WoW guild, though we hardly ever interacted with one another and loved every moment. It was much like Ron Swanson's best friend.

Much as I loved the possibilities of WoW’s solo-yet-online gameplay, I’ve found something that seems almost custom-tailored to my style: the Miiverse. The first time a friend brought over his Wii U, I sat in awe of its Mii-filled breadth. I had read about this feature and dismissed it as pointless social media shoehorning, but when I watched all the Miis scurrying about to share their little slices of gaming experience, I felt an undeniable sense of kinship. 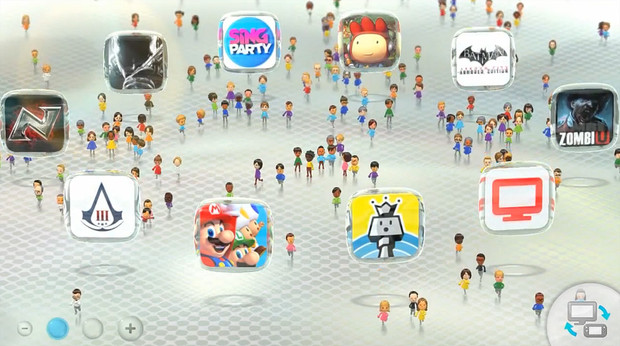 Since buying my own Wii U, the Miiverse has become my beloved little porthole into the gaming universe. There’s something invigorating about reading the message-in-a-bottle type thoughts from other players. Of high importance is the fact that the Wii U never harasses the player about these posts, such as popping up notifications or forcing a visit. There’s no agendas, no politics, trolling (aside from the occasional cock), or egotism. Truly this is the purest incarnation of gaming’s lifestream.

Though by far, my favorite use of this feature doesn’t involve direct interaction. So often in the past I wish I would have kept a journal of my thoughts as I experienced memorable and standout moments. Keeping a pen and paper nearby was generally too much of a hassle – not to mention I’m left handed and can’t handwrite for shit. Any time something amazing happens now, I can flip to the Miiverse and record my thoughts along with a screenshot. Nowhere is this advent more appreciated than with a game like Earthbound.

A common criticism of Nintendo tends to be the family-friendly approach (and therefore irrevocably anti-gamer), and this extends to the heavily moderated posts of the Miiverse. While I’d agree that the Wii era found the company catering to a new demographic, I’ll argue that the Miiverse is indicative of Nintendo understanding the essence of gaming better than any other company on the market today. A memorable experience to me will always outweigh a false sense of importance derived from arbitrary numbers and virtual trinkets, and that is why I am so very thankful for the Miiverse and the new dimension it has added to the way I play games.

I mostly enjoy retro games, but not entirely for the challenge. I like games to be a mix of a book and a movie in that they are visually stimulating but still allow the player to fill in the voices and other elements with their imagination. I'm weird and awkward, which really makes me stand out among gamers.

Outside of video games, my other great passion is music. I'd consider myself a metalhead because it is what I gravitate towards most. My collection also boasts healthy helpings of shoegaze, dream pop, darkwave, visual kei, neofolk, neoclassical, classic rock, prog rock, classical, and of course, video game soundtracks, along with smatterings of whatever else has caught my attention.

My favorite games include: