I met Reggie Fils-Aime!! The Reginnator Himself! Oh also played Smash Wii U

*fun note before I forget REGGIE HIMSELF says he dislikes Majora's Mask and OoT/LttP are his favorites (made my day) enjoy the gameplay vids!

Yep that's right I freaking met the President and COO of Nintendo, Reggie Fils-Aime. Now, obviously we all are wondering, "How did this dope get to meet Reggie!?". Actually, the thing was one day my brother told Phil and I that Nintendo was holding a contest only for New York residents only for a few days and you had to write an email on why you want to meet Reggie. I was like okay, I've got nothing better to do and I wrote a about a 3 paragraph email; replies weren't expected until early November and this was mid-late October, but in all honesty I didn't think I was winning until I got a random email a week before the event. The email asked some follow-up questions and only 10 winners were selected...and there weren't allowed to bring guests. So unfortunately for my brother, he couldn't come.....

The best two lookings guys there behind Reggie! 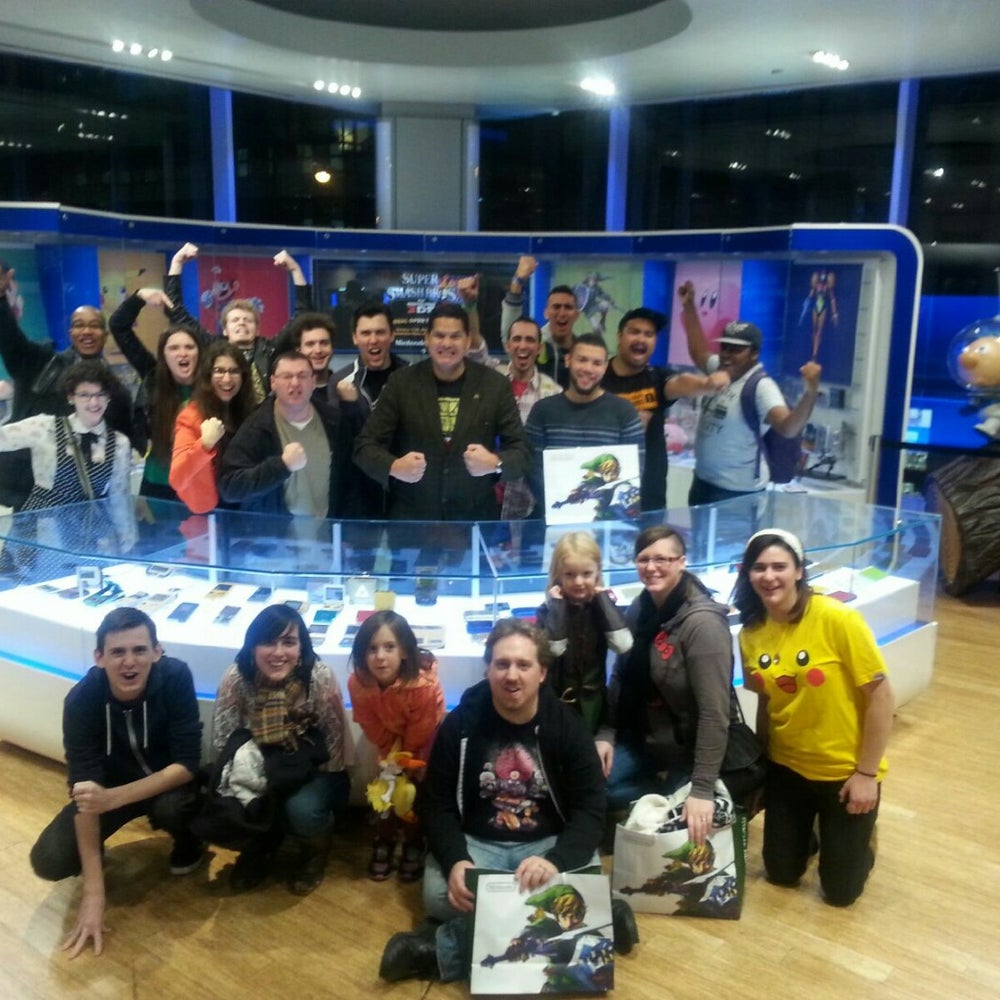 He got an email on the last day they were noticing people of winners (Friday November 7th) and somehow two members of SuperNintenbros were going to meet Reggie and play some Smash early. The big thing in the promotion was not only meeting Reggie, but getting to hang out with him and fighting his Amiibo! Now, this isn't the first time we were playing Smash Wii U (as the Best Buy E3 event) but its the first time we were going to play it after months of Pro Tournaments for Super Smash Bros. for 3DS; in essence we had knowledge of the game.

Wednesday arrived and we went to the Nintendo World Store and they closed the entire upper floor because of the private event we were invited to! Once we got past the check-ins, there was food, Wii-U and 3DS set ups everywhere and of course this big guy who we all know...Dan from Nintendo Treehouse (he was there) but I mean Reggie! It was pretty awesome and surreal, he gave a brief introduction, joked as he always does (but it was funny as it was similar to the E3 Robot Chicken thing), and honestly wanted us to ease in the event and treat it like a normal thing. To clarify on the joke, someone asked about a new Metroid game and he goes yeah I've got it here...reached into his back pocket with his 3DS and then said we all couldn't play it! The Wii U's had Mario Kart 8 DLC (this was before it officially came out), Captain Toad, and in a special "living room" set-up two Wii U's with Super Smash Bros. for Nintendo Wii.

The first thing I did though was jump right to the Wii U with my brother and the best part they gave us GCN controllers with the adapters! In addition, the Wii U was set up with the new mode: 8-Player Smash. I grabbed a silver classic GCN (although they had the new one that is coming with the $99 bundle *more on that later) and man I have to say it felt fantastic. I love Super Smash Bros. 3DS and obviously playing pro smash 3DS with others and being on Clash Tournaments I know and understand the controls, but nothing beats Smash on a GCN controller. I do want to learn how to play with my GamePad, but picking it up and knowing the meta just made it all the better (yes the bias is clear!).

Thoughts on 8-Player Smash and the 'new' GCN controller

I thought 8-player Smash was pretty fun but

Also, the freedom the game gives you to choose normal costumes even though you are on different teams (example blue link on green teams) which makes it even worse with a large amount of players. It's utter disarray in my opinion, and let's not forget that in tournaments team attack is on! We'll see how this plays out by next week!

Notes on the GCN Controller are that is feels cheap. No knock to Nintendo making that awesome black design with the Smash logo but when I picked it up it felt light and made of cheaper material than of that of the regular GCN controller (which I just used). The positive on it though is that the Matte finish on it feels great and the grip is fantastic.

They are amazing and simply awesome to look at as well! I got to see a Level 1 Mario grow up and learn from the fights he was in as well as vs a few level 50 Amiibo's. The Amiibo essentially is a living AI that constantly learning even at its "limit" of level 50. The Amiibo, as Dan from Nintendo Treehouse explained it to me, is learning your fighting style and a way to counter it as well. I watched it learn from me spiking it all the time to knowing it should air dodge there or it shouldn't overshoot a ledge and rather stay below it. In addition, even if your Amiibo is level 50, that doesn't mean its amazing. We at SNBGaming64/SuperNintenbros wrecked all of the Nintendo's staffs Amiibo's (same can't be said for the others), and watched it get back into another fight with progress. It was funny how Dan was joking how his Amiibo is now jacked up because of all the fighting he did with my brother and I!

Remember how I said Amiibo's are always learning, well Amiibo's also learn from the settings you play in. The Amiibo's we played were not that bad in 1v1's but when we at SNB decided to team battle two level 50 Amiibo's...well let's just say they didn't know what "team battles were". Also, playing with items or without effects your Amiibo's play style/knowledge on what items are and how to go for them. Regarding physical appearances and quality, they look great and are actually lighter than they seem! Word of advice though, don't throw them around in your backpack, they seem like they can break if handled poorly.

If you have any questions about Amiibo's please ask, I know more but don't want to spoil how amazing they are!

I had a fantastic time and actually got to talk with Reggie about not video games. He's an amazing guy and pretty tall though not that tall as I talked to him about how he got this job, what he was doing at college etc. He told me he wanted to be a banker as he was studying finance in college (like myself), got offered a job at Proctor & Gamble and really hit off from there. He grew up with his family and college by playing Super Nintendo and Nintendo 64 though now he mainly plays his 3DS because he is always traveling, but he says he tries to practice for Smash but "he sucks". I do feel bad since he's always talking to like big-time nerds and/or having awkward conversations with them, but he might enjoy it. We actually talked to him about basketball and football and man he loves basketball with a passion! I think we went on 20 minutes for basketball and I could see the joy in his eyes with that!

Then we talked about finances, where he travels, work stuff (well I did) and after that I handed him my resume, which he gladly took and said no promises...though at the end of the day I saw him walking out with it in hand! Honestly, Reggie is an idol for me in the sense of I can achieve that goal/dream and he's a living personification of it.

We'll see where the future takes but right now all I can see is Smash Wii U (and a possible job at the Nintendo World Store!)