Finishing the First Game I Ever Played... 17 Years Later

I have a confession to make.

I recently finished the first game I ever played for the first time and it only took me 17 years to do so. Now, before anyone tells me that I’m the worst gamer ever, this sort of thing isn’t usually the case with me. I’m usually pretty good when it comes to finishing games. I finished Bioshock: Infinite in a single weekend. Fire Emblem: Awakening took one glorious summer of RPG goodness. With college classes to take into consideration, it takes me some time to finish games these days, but nowhere near 17 years. On weekends or with free time I can finish a standard game over the course of a month or so.

So, to provide a bit of background, let’s go back to Christmas 1997. I was just five years old when my sister and I received a Nintendo 64, our first game system. With it, we received Super Mario 64 and Diddy Kong Racing. Super Mario 64 is perhaps my favorite game of all time. I played it more times than I can remember as a kid and could probably play through it blindfolded. However, this blog deals with the other game we received that year for Christmas and the first game we popped into our Nintendo 64: Diddy Kong Racing. 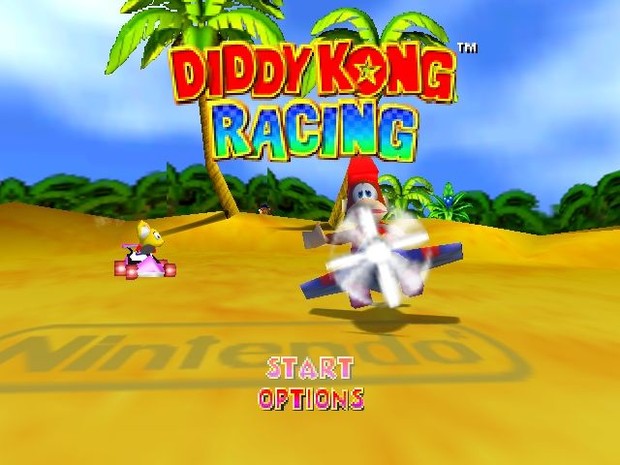 Diddy Kong Racing is another one of my favorite childhood games. The game was bright, colorful, and featured racing in a variety of different worlds. What differentiated the game from Mario Kart 64 is the Adventure Mode, where the player can navigate through a hub world and slowly unlock the worlds and levels in-game. As a kid, I loved just driving and flying around in the hub world, where the music was always upbeat and even changed depending on which area of the map you were in. You could go through most races with the choice of three different vehicles: a standard kart, a hovercraft, and an airplane. 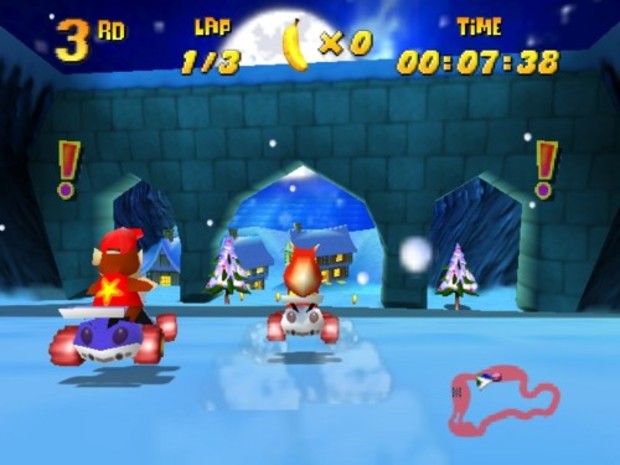 I somehow never beat this game as a kid, despite it being one of my favorites. So much about the game is etched into my memory. It was my first introduction to Banjo, who would star in two of my favorite games growing up. It even gave us our first look at Conker, who would later star in a much… different game. Even the opening sound bite of children laughing while Diddy Kong flies around is in my memory, to the point where I’ve recognized it used in other sources. When the short trailer for Silent Hills was shown at the Tokyo Game Show and you hear children laughing in the background, I instantly remembered it from Diddy Kong Racing. There’s even a Christmas commercial on TV this year that uses it.

Much of the game isn’t particularly hard. The initial races are quite easy and you can make plenty of mistakes and still come out in first place. However, the secondary coin races did take some time to complete and the boss races were hard for me as a kid. Yet, when you usually think of most kart racing games, there usually isn’t an endgame or means of beating it. You race through the tracks for fun and that’s it. Maybe that’s why I didn’t finish the game as a kid; there wasn’t some epic story or quest to go on. It was just racing.

A few years ago, when looking through my games, I noticed that Diddy Kong Racing wasn’t there. My memory was hazy on what had happened to it. I vaguely remembered possibly selling it or lending it to a friend and never getting it back, but I didn’t know for sure. So, wanting to play the game again, I picked up a cheap copy at my local game store. It was around this time that I was casually surfing the web and looked up some information about the game. Confused, I saw people talking about some space levels in the game. Were they playing the same game I had played as a kid? I didn’t remember ever seeing a space level. There were four main worlds in the game: a Jurassic world, a water world, a snow world, and a medieval world. I had never come across a space world.

Then, I remembered that I had never beaten the game’s main boss, Wizpig. In the hub world, his face is etched into the stone right when you start the game; it’s hard to miss. When you first play the game, the face is stone-colored. However, as you progress through the game and defeat the bosses, the face’s mouth starts to open, until it is wide open upon beating the medieval world’s boss. By entering the huge stone head, you compete in the race against Wizpig. 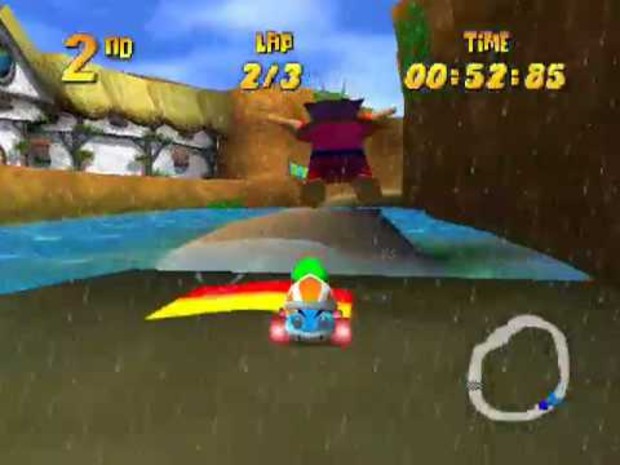 How can those blocky 3D legs move so fast?

So, after playing through all the worlds on my new copy of the game, I went up against Wizpig and was thoroughly trounced. Seriously, the rest of the game is a cakewalk compared to this race. If you mess up at all, the only solution is to start over and try again, because you can’t catch up to Wizpig, no matter how hard you try. So, on a snow day when school was cancelled, I set out determined to beat Wizpig. After what felt like hundreds of attempts, I finally did it. The familiar victory music came back and I felt so accomplished.

After the race, you see a short cutscene of the game’s playable characters having fun on the beach. Acting the sore loser, Wizpig comes by and terrorizes the tiny characters, using his spaceship to start shooting out laser beams at them. He then jumps up on the spaceship, goads the player to follow him, and blasts off into space.
To follow Wizpig, you go to the lighthouse, which transforms into a rocket ship and blasts off into space. Then, you are in the space hub world, watching TT walk around and looking at the new races to complete. I had never seen what any of the races actually looked like and went through them all, stopping at the coin races. 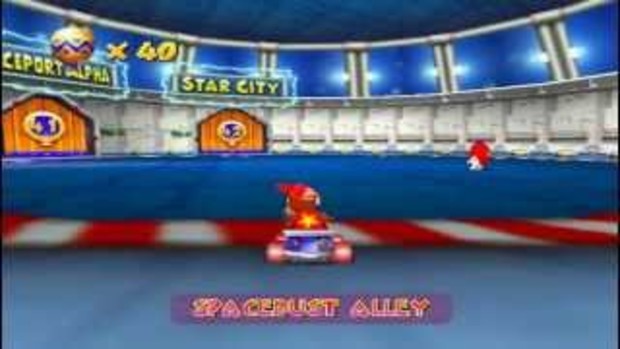 What is this place!?

It was all such a surreal experience. I was experiencing something brand new to me in a game I had played for years. There was brand new music and brand new tracks I had never seen before, despite the game being over a decade old at that point. It was like if, in Ocarina of Time, you walked to a certain part of Hyrule Field, used a certain item, and stumbled upon a brand new dungeon to explore. Or, it was like if a brand new expansion of the game had just come out, even though it was my fault for not progressing that far.

At the time, I felt content in what I had seen and didn’t press on after that. A few years passed and, while cleaning up parts of the house, my mom found our original cartridge. It turns out the game was tucked inside our couch and had most likely been there for a decade. Holding the cartridge in my hand, I felt really happy, knowing that I hadn’t in fact sold the game or lost it; it had just been misplaced. I had my original cartridge back that I had played so much as a kid.

So, I decided not to mess around with the game anymore and finally finish it. Spending a decade underneath a couch cushion had done nothing to the game and it still played just fine. Popping in the game again, I saw that I was right at the race with Wizpig again. I soldiered on through it, finally beating him after what felt like forever. On my winning race, I was very nervous. In many previous attempts, I would catch an initial boost and be in first place for a few seconds before Wizpig passed me up. Usually, he would run right over me and send me down into water or bring me to a complete halt, forcing me to start the race over again.

The only way to beat Wiz Pig is to use every single boost. If you miss one, the only solution is to start over again. In my final race, I went over the boosters and almost blasted off into the water, which I had done a few time before when I had almost won. Then, on the second lap as Wizpig momentarily passed me up, he ran right on top of me. My heart was pounding, but he somehow didn’t step on me and force me to start over. Finally, I won. 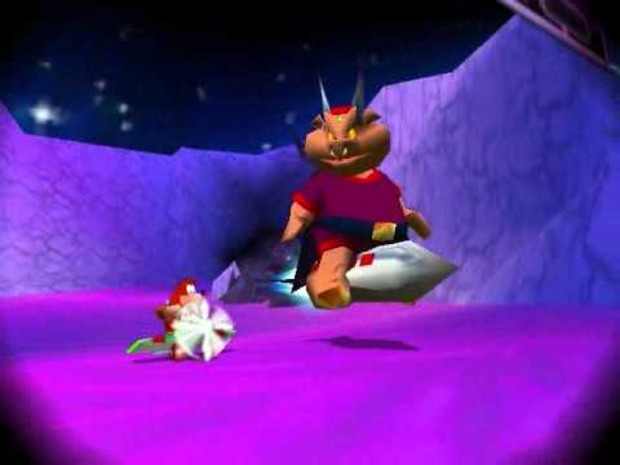 I made my way to space and went through all the regular and coin races, ready to take on Wizpig in the final race. In this race, he piloted a rocket through the winding path. While Wizpig is not that difficult to beat on his own in this race, the track itself is a monster. There are quite a few sharp turns, each filled with plenty of obstacles to run into and halt your progress. A few spaceships blasting the track with laser beams certainly didn’t help either. So, after going through this race many times, I finally won and defeated Wizpig for the final time. 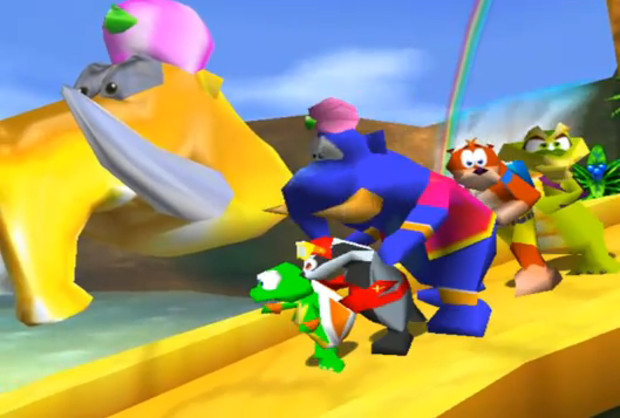 So, 17 years after first playing the game, I sat through the ending cutscene with a sense of accomplishment. What follows is a short cinematic showing the characters running and dancing around in the hub world while the camera pans around. The Wizpig face on the stone wall has been changed into Taj the Genie’s face and some enemy bosses join in. With much of the soundtrack drilled into my memory, it felt nice to hear brand new music I had never heard before, both in the credits music and in-game medleys. It felt like I was watching something completely new, even though it had been my fault for not reaching that point before.

So, there you have it. Does anyone else have a similar experience of finding out they had missed some feature or level of a game, only to finally discover it much later? Or, has it taken anyone else longer than they care to admit to finish a game?