The Tale of the Princess Kaguya: A Film Review 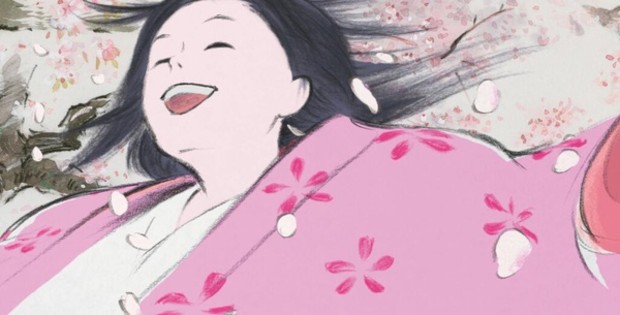 I realize this isn’t exactly video game related, but I wanted to express my thoughts on this fantastic film. The Tale of the Princess Kaguya is a Studio Ghibli film directed by Isao Takahata that was released in Japan last fall and has finally had an American release. It is one of the best animated films of the year, featuring a unique visual style and a captivating, emotional story.

I confess that I am a recent fan of Studio Ghibli; I only saw my first film over a year ago. After watching My Neighbor Totoro with family, I wondered why it had taken me so long to see one of their films. I am a huge fan of animated films, particularly 2D works, which Studio Ghibli excels at creating. Thankfully, my local library had over half of their films. So, on free weekends, I would take a film or two home and watch them with my sister. I love how imaginative and creative Studio Ghibli films are, transporting viewers into another world.

I had heard that The Tale of the Princess Kaguya was receiving a limited release in the US and was thrilled to see that it was showing at my local art house theater. So, last night, I went to see the film with my sister, making this the second Studio Ghibli film I have seen in theater (the first being The Wind Rises earlier this year). The film is based on the tale of the bamboo cutter, a centuries-old story from Japanese mythology. I don’t know very much about Japanese mythology, so the story was brand new to me. 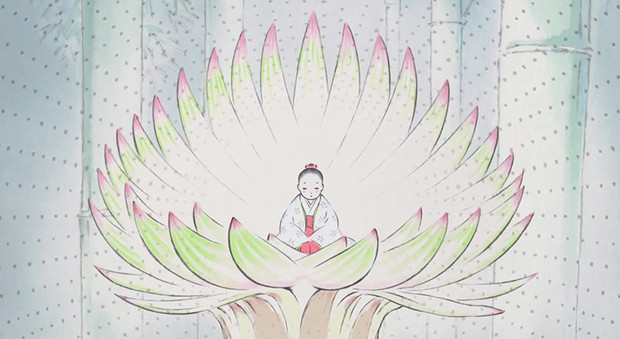 The film tells the story of the titular Princess Kaguya, who is found inside of a bamboo shoot by a bamboo cutter. Taking the little princess back to his wife, the girl miraculously grows into an infant. She grows taller at an uncanny pace, which is seen in how she interacts with the local village children. Though she is little more than a toddler when she begins to play with them, she quickly passes up most of them in age, becoming a preteen girl in no time. After discovering a bamboo shoot filled with gold, the bamboo cutter prepares a residence for his wife and daughter in the city, where he wants Kaguya to live the life of royalty.

In the city, Kaguya takes on a life that is brand new to her. Though she dislikes the structured and stifled life of nobility, she acquiesces to please her parents. Soon, tales of her story and of her beauty travel all over the land and she is met with a number of suitors. She yearns for the countryside again and for the carefree, simple life she enjoyed with her friends. 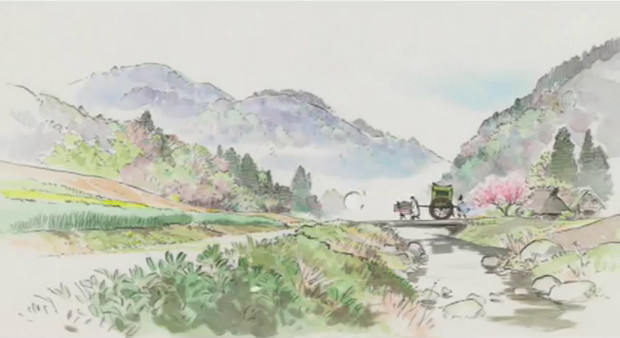 One of the first things I noticed about the film was its distinct visual style, much different from that of most Studio Ghibli films. The film is gorgeous to look at, with a style that looks more like a moving picture book or watercolor painting than a typical animated film. Much of the film takes place in the rural countryside, where it leisurely showcases the simple beauty of nature. In short scenes, we see animals scurrying about, water trickling through brooks, and leaves blowing lazily in the breeze. While these vignettes are not explicitly important to the story, they collectively create a wonderful setting that, accompanied by the sounds of nature, immerse you in the film.

Like many other Studio Ghibli films, The Tale of the Princess Kaguya has a fantastic soundtrack. This film marks the first occasion that Joe Hisaishi has scored a Ghibli film outside his usual collaboration with Hayao Miyazaki. I am a big fan of Hisaishi’s Ghibli compositions and the range of music he creates (I own physical copies of three of his Ghibli soundtracks). He can compose songs that are fast-paced and epic and also songs that are softer and more introspective. The Tale of the Princess Kaguya is mostly made up of these softer, simpler melodies that have a lighthearted and carefree air to them. 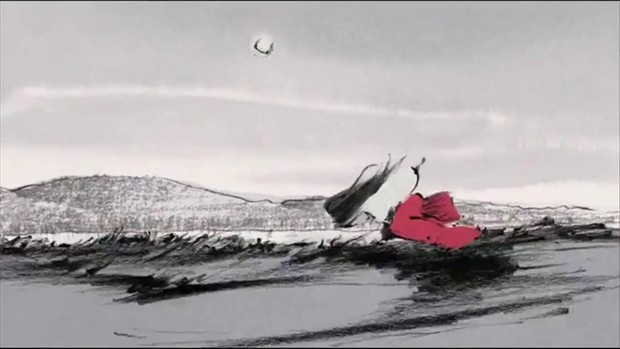 Gradually, the film departs from this light, carefree style as Kaguya’s life in the city turns out to not be as grand as her father hoped it would be. In a few scenes of the film, the visuals break from the bright style as a reflection of the emotions in the scenes. In these scenes, lines become thick, choppy, and dark and have an almost unfinished look to them, all to reflect the swirling emotions inside Kaguya.

However, this film certainly isn’t for everyone. It runs at over two hours and has a very casual pace to it. Those used to quickly-paced films might grow impatient with the runtime and the lack of action in most scenes. However, for filmgoers looking for a more laidback and meditative film, The Tale of the Princess Kaguya delivers.

The Tale of the Princess Kaguya is one of the most beautifully animated films I have seen to date and is a captivating, emotional journey. If the film is playing at a theater nearby, I wholeheartedly recommend going to see it. It is a shame that the film performed as poorly as it did in Japan, only making a little over half of its budget. It is clearly a work of love and dedication. It was in production for eight years and is a film Takahata wanted to make for over fifty years. With the future of Studio Ghibli uncertain moving forward, if this is truly one of the last films in their acclaimed run, then it is a swansong worthy of the Ghibli name.