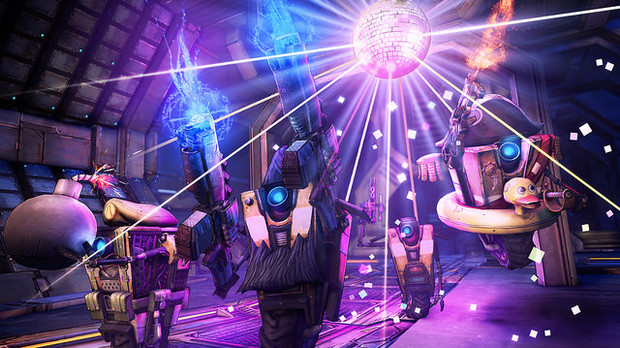 I bought the original Borderlands, day-1. Loved it. Verbally assaulted anyone who felt differently.

Now that you know I'm an inherently more credible gamer than you are, you are going to read my impressions of Borderlands: The Pre-Sequel. Because you want my approval. To have just a tiny bit of my glorious and impeccable presence rub off on your pityful, scrubcore style.

But, really. I'm (probably) a nice guy who likes to think he knows a thing or two about Borderlands. Listen up, please? 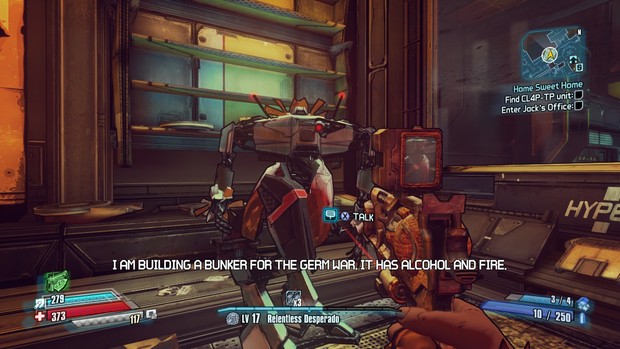 Upon starting up The Pre-Sequel, it was cool to be reminded of these two playable female characters and (for all intents and purposes) two playable male characters, respectively, available from the start for the first time in Borderlands history. This way, nobody is angry. You want tits? You got twice the amount now. You want a dudebro military strongman? You got him, and he has an awesome beard.

You want a Claptrap?

Of course, as somebody who's been leaning more and more towards female characters whenever given the option, I picked the cowgirl with a serious fetish for pain. Not even kidding, she has a questionable as heck moral compass.

"I haven't felt this good since Mom died!". Whoa. 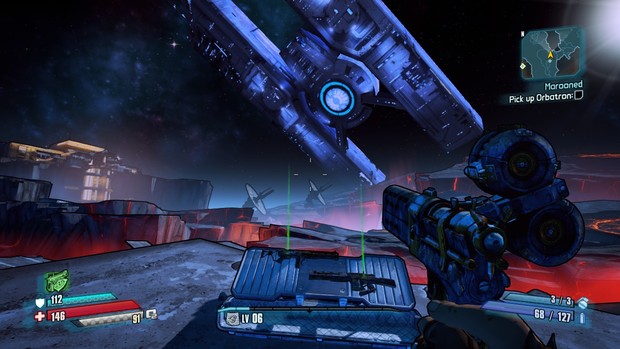 Not to contiuously totally 1-up Darren, buuuuuut I've taken my own screenshots as well.

After quickly realizing that my character was kind of a psycho, I began warming back up to the Borderlands formula of hilarity, shootin' and lootin' (not always necessarily in that order).

I was havin' some good ol' fun times, for sure. 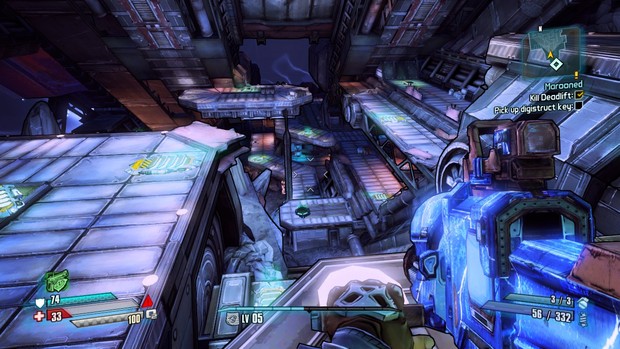 Above is a shot of the room housing one of the game's first boss fights. Not to waste any momentum from promptly crash-landing on Pandora's moon after such a bombastic intro, you're treated to one of the more creative bosses Borderands has given us. Flying and hopping around, above and below the many levels of this stage while simultaneously focusing your attention on "Deadlift" was pretty exciting and a nice break from the somewhat typical "strafe and shoot the bullet sponge".

By that point, I was also graced with one of the game's new weapon variants (also seen above): LAZORZZZZZZ!!!11!!1 They're pretty damn awesome. Throughout my 23 or so levels, I've almost always had one in my inventory for the right situations. Not quite as overpowered as I thought they'd be, but they're typically slightly more useful compared to other weapon variants of adjacent value.

For example, a "blaster" (also see: that shit you see in them Star Warses) laser (or any laser, for that matter) seems to always have some sort of elemental effect. It's pretty easy to find a mainstay blaster laser as opposed to even a half-worthwhile assault rifle. 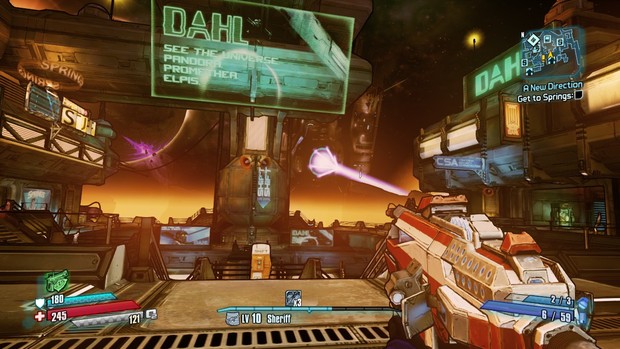 The hub world of The Pre-Sequel, Concordia. Infinitely more awesome than BL2's Sanctuary.

With all that great stuff said, shortly after the first hour, feelings of "same old shit" started to settle in. I would even say it started to feel like a second-hand Borderands 2. This wasn't exactly what New Vegas was to Fallout 3.

The humor may've been dialed back a tiiiiiiiiiiiiny bit (people aren't wrong that it's a little more in-tune with BL1), but it's still pretty much BL2's "lol we're so random and wacky". Which I actually like. However, much of the dialogue here was feeling like cutting room floor material. Not terrible or unfunny, just... heh. Inoffensive. Though, of course, some may enjoy that if they found BL2 a little too much for their tastes.

The mission design wasn't any more inspiring. It's what you'd expect. Spoken dialogue contextualizing the situation (in this case, Handsome Jack often complains about progress being haulted once again), go here and do a variation of collect and/or shoot, character butts in with something quirky, continue mission, character butts in with something quirky, end mission, good jorb. Inoffensive.

The early settings were very open, but also rather barren, often requiring some trekking before finding a "GET YOU ONE!" station. Even the more dense/restrictive environments weren't super impressive. Borderlands 2 may've been much about ice environments for the first few hours, but those were certainly more visually exciting than dull blue rock, grey pipes and black skies. At the same time, again, they aren't terrible. Occasionally, I would pause to appreciate the landscape. The Hyperion 'H' often looked nice contrasted with the red glow of the moon's lava or the various shades of the lower part of the background.

And, thankfully, exploration is still rewarded with hidden collectables and chests littered everywhere.

I feel a little like a broken record, here. Inoffensive. 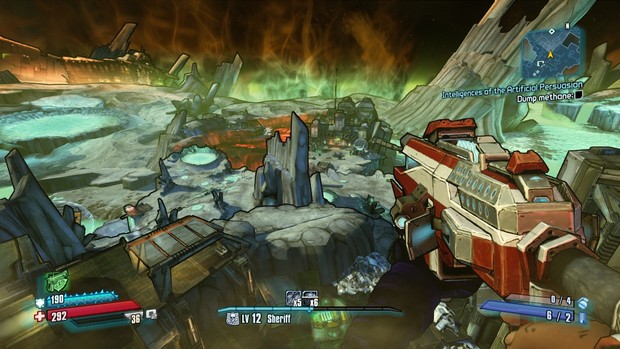 Slowly, though, the game starts to show spikes of improvement. You start to happen across some genuinely funny characters like Red Belly and Peapot (related), the missions become more hectic, the settings get more far more interesting (especially once you land back on the 'H' base), and, finally, you (or, at least, "I") start to appreciate the plethora of small adjustments to the experience.

Moonstones (not to be confused with what evolves a Clefairy to a Clefable) are a new form of currency alongside the usual bucks, used to unlock special chests littered about the place, to upgrade your backpack/ammo space(es), to purchase one of Moxxi's temporary stat buff cocktails (those could get interesting in True Vault Hunter Mode), and possibly some other thing(s) I've yet to discover as I'm nowhere near done.

As you're often up against the vaccuum of space (not really a problem for Claptrap players, though), your character now has an "OZ Kit". Not only do they give you something to casually be aware of as well as your combat proficiency and remaining ammo, but they give you two new tricks: Jump-boosts and butt slams. Used together with your other abilities during combat, they can yield all kinds of exciting and decidely vertical results.

Even further, the OZ Kits also come with their own special stats. Elemental butt slams, buffs for when your airbourne or whether you're in a vaccuum or an atmosphere, temporary buffs following a butt slam, all kinds of things. They don't feel like a second shield or class mod, they're very much their own thing, encouraging unconventional offensive tactics as opposed to just providing permenant buffs or simple situational buffs like increased melee damage while your "Maylay" shields are depleted.

I'm also pretty fond of the new hoverbike vehicle and I'm probably very close to unlocking the use of The Grinder, which is a machine that you dump useless weapon drops into in favor of something potentially useful! It's like pouring bucks into the slot machine, only the bucks are now dangerous clumps of metal.

Things like the cocktails and The Grinder assure some extra fun in True Vault Hunter Mode, as well as the supposed added dialogue bits. 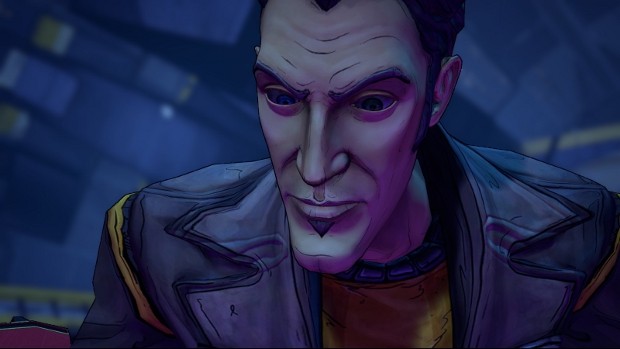 Um. I swear I didn't steal this from Darren's review. Don't you dare think of me like that.

At the point that I'm at (approximately level 23), I'm really digging the extra bit of insight into Handsome Jack. How he became the douchenozzle that he is in Borderlands 2. Like Destructoid's review mentions, he's hardly ever exactly sympathetic, but his transformation is very sensible and a joy to witness. It's not in-your-face or subtle, more somewhere in the middle.

As one of my favorite video game villains (second or third to Ratchet & Clank's Dr. Nefarious), it's great to continue seeing him done justice. If you were a fan of his writing in Borderlands 2, you wouldn't know that the Pre-Sequel wasn't even primarily written by Anthony Burch (for better or for worse).

The story, as a whole, so far, has offered a couple nice little surprises as somebody who was expecting the bare minimum for a prequel job. Let's just say, some elements are nostalgic (being a story that barely takes place after the original Borderlands) while others are almost entirely new. 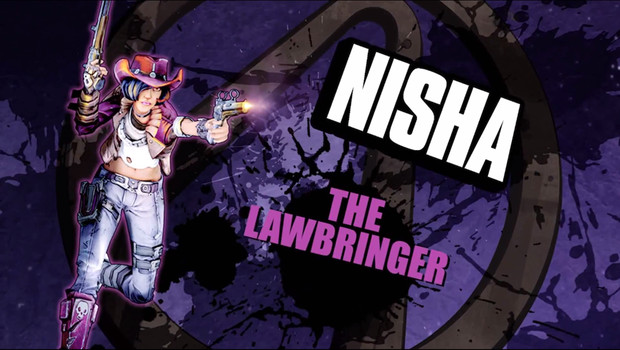 As far as the new classes are concerned, I'm not gonna pretend to be a expert in that respect. I've only ever played the Soldier in both Borderlands 1 and 2. I don't know how specifically different The Pre-Sequel's classes are, but, from my time with Nisha the Lawbringer, the particular build I have of her revolves around "Order" stacks that you achieve as you kill or get hit. They mostly provide bonus melee/gun damage and potential heals, but sometimes they encourage you to withhold causing damage to specific enemies until your stack is high enough (known as "Wanted" stacks), which is somewhat interesting.

Appropriately, considering her cowgirl aesthetic, her special skill is an auto-lock that drastically increases her fire rate, reload speed and damage. Firing off a good revolver while it's active can be a power trip. She's a pretty fun gal, mechanically.

Claptrap, though, looks like a blast. Those obsessed with co-op play will, no doubt, be into him. 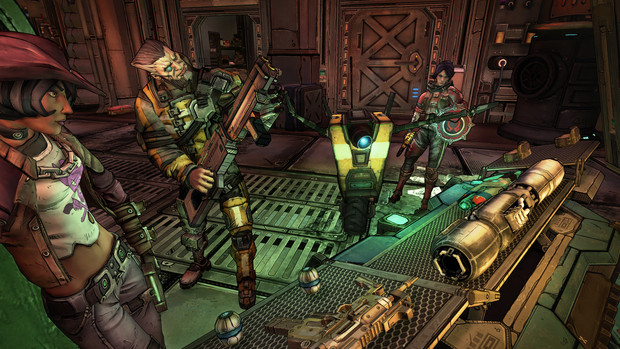 As a gigantic Borderlands fan, it's hard... nay, impossible to not find a good lot of enjoyment in The Pre-Sequel. Unless you're that sick of the formula, at worst, this is something you're going to want to pick up at some point.

As for me, I'm officially really into it. Not a huge surprise, I suppose. I'm really looking forward to subsequent playthroughs as I go through every little bit of content the game has. Heck, I know I'll probably try another playthrough of either Borderlands 1 or 2 when this is all over. 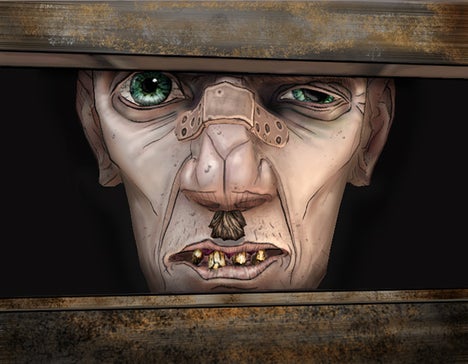