Fangs for the Memories: Sound in Silent Hill 2 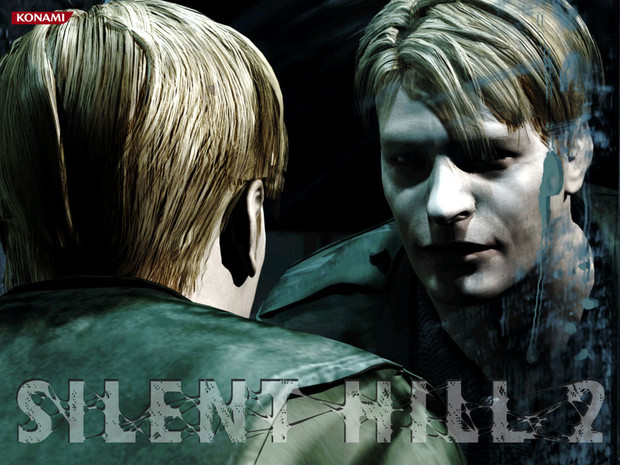 I have limited experience with games in the horror genre. It has only been in the past few years that I have started branching out into this exciting and frightening genre. One of the series that I have focused on in particular is Silent Hill. They are some of the most ambient, creepy, and intense games I have played in the genre. I could go into depth on many facets of these games that make them as creepy as they are, including the enemy designs, environments, and stories. However, one of the strongest contributing factors to the creepiness of these games is the amazing soundtrack and sound direction from Akira Yamaoka.

What follows is not one moment in particular that frightened me, but a series of moments with a common theme: sound. It is commonly held that we are more afraid of the things we cannot see than the things we can. Suspected shadows dashing through the darkness and sounds we think we might have heard in the dead of night have more psychological weight than something viewed in full daylight. The first game in the series captured this idea well. Partially due to the console restraints of the Playstation 1, the game could not handle long draw distances. So, to compensate, the town of Silent Hill was thrown into a world of fog, where you could only see so far into the bleak and foggy distance. With the addition of a creepy soundtrack, the world of Silent Hill became nightmarish, as you didn’t know what lurked in the darkness around you.

At the start of Silent Hill 2, our hero James Sunderland returns to Silent Hill in search of signs of his dead wife after receiving a mysterious letter from her. Forced to stop his car well outside the town limits, he is forced to walk through the nearby woods to gain access to the town. Almost immediately, dense fog settles in, and visibility becomes very limited. It is mostly quiet, save for the sound of James’ footsteps and the ambient music. Yet, with little to see as the game transitions into town, it is already hard at work making the player uneasy. 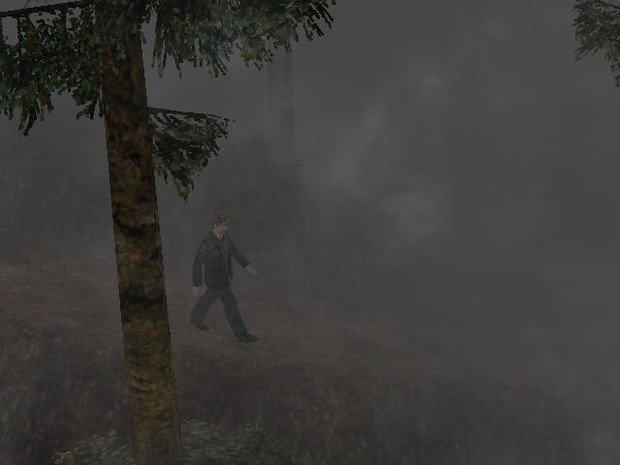 A forest path is unassuming enough and the one in the game is an official park trail. Yet, quietly in the background, you can hear what sounds like a chain breaking and a savage dog sprinting in the distance. The dog sounds more like a hellhound than a pet. With visibility extremely limited, you get the feeling that this rabid dog could show up at any time, not unlike the dogs from Silent Hill 1. Yet, it never does. At various intervals, the sound of the dog returns, serving only to make the player nervous.

When the player comes closer to town and passes through the cemetery, what follows is one of my favorite moments in the game, even though it bears no importance whatsoever to the story and is never referenced again. As James walks closer to town, the sound cuts out and you can only hear your own footsteps. Suddenly, you can hear another distinct set of footsteps, alternating with your own. These sound slower, more labored, as if some undead creature is in slow, sure pursuit of you. Yet, as soon as you stop walking, the sound stops, as if the creature knows when to stop and start again to hide its movements. A few seconds after you begin walking again, the sound returns. The feeling of being chased or watched in a game is frightening and has been used in countless games. Here, you don’t know who or what is following you. At this point in the game, you still have not faced a single monster, or even seen one. Yet, with the great sound direction, the game succeeds in already frightening the player. 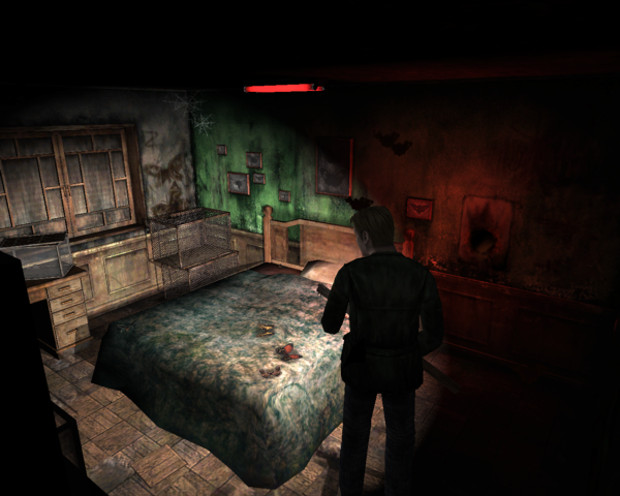 Later in the game, after the player enters the apartment complex, you are forced to navigate the dingy and poorly-lit rooms in search of a way ahead. One room in particular scared me so much that I stood in the doorway for what felt like an eternity, too scared to go in and face what was inside. Thanks to the game’s camera angles, I could only see James and none of what lay inside. The only sound I could hear was a steady, rhythmic twang, like that of a mattress spring. It sounded as though some creature was on the bed, or the bed itself was alive and undulating. Finally working up my courage, I entered the room, only to find no monster or creature. Nothing visible was causing the noise, but it went on anyway. Setting the room apart from the many others that were in the apartment was a collection of dead butterflies, moths, a hole in the wall, and green slime. It was clear that something had happened in that room, but it is entirely up to the player’s fears to decide what. 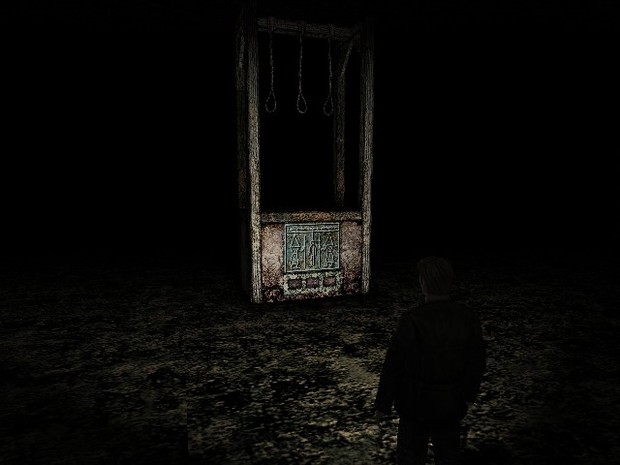 The final moment in sound direction I want to talk about happens in the Toluca Prison. At this point in the game, no punches are being pulled; nightmare mode is in full swing. One room in particular, the courtyard, looks relatively empty, a far cry from the cramped rooms and cells of the rest of the prison. Yet, in a huge, wide open location, the player can only look into utter darkness. It feels as though the room goes on forever and that it will be impossible to find your way back to the entrance. The room is utterly silent, save for a huge, rushing sound. To me, it sounded like a gigantic creature was lurking inside the room, ready to devour the player. As it turns out, the room was empty of any creatures.

In Silent Hill 2, the sound direction was one of my favorite aspects of the game, turning an already scary game into a downright claustrophobic and terrifying one. Perhaps what gives the sound direction such weight is the possibility that the creepy sounds you are hearing might be real. Playing through the game for the first time, you don’t know which sounds come from real monsters and which ones are used solely to torment and bait the player. In all the examples I discussed, the creepy sounds had no source; there was nothing actually there. Yet, the imagination fills in the gaps, creating terrors stronger and more fearful than anything that could have been in the game.