Fangs for the Memories: What Isolation taught me about xenomorphs 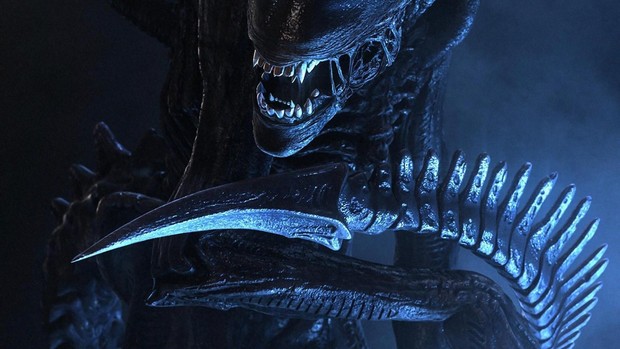 Outlast's first 15 minutes had my nerves shot, Silent Hill's elementary school was so effectively haunting that I haven't touched the game in two years, Slender still makes me paranoid of looking behind my back, the first two FEAR games make you quiver even with all that fancy weaponry, and even games like The Last Of Us have their moments.

However, as of two nights ago, Alien: Isolation is finished and embedded deep into my brain. It even gave me my first real nightmare I've had in months. For as little actual time as you spend with the alien, you do spend a lot of time dying by it's hands, mouth, claws, and spiney tail. Creatively speaking, the xenomorph is the realest thing aboard the Sevastopol, and through isolation I formed a special bond with the creature. For better or for worse. 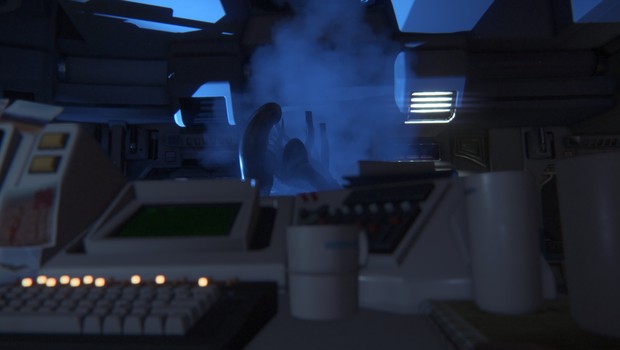 In the movies, you're merely watching how these things work. You're seeing how others may react, what others would do to survive, but you're hardly ever thinking about what you would do, hypothetically, if you were placed in a room with one of these things.

In your mind, you're a total badass. What's so tough about outwitting some premitive animal? I'll splash my piping-hot coffee all over it's back and call it a bitch. Maybe you're not quite that confident? But, you're still sure you'd be plenty alright? So easy to think that, until you play Alien: Isolation. 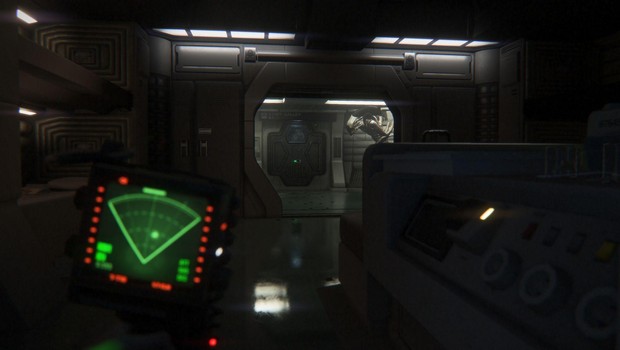 The first 2 or 3 major xeno bits of Isolation, you don't even have your flamethrower to keep it from formally inviting itself to your face. You're gonna need some real tight tricks, lots of spatial awareness, and lots and LOTS of patience to make it through these. Typically, the alien doesn't give you much room for error and it's easy for it to surprise you.

You think you're clear for that door ahead of you, but then you hear something scamper quickly from behind, above and then ahead to finally see the alien plop down from that last vent all like "Wassup?". That's when you become frozen with fear, it screams out in bloodlust, it runs for you, and you're treated to a very violent French kiss.

It's not just fast, either. You haven't heard the half of it. 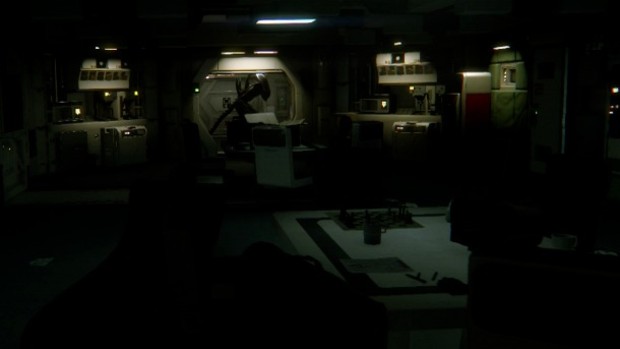 It's sensitivity to sound or smell is even higher than you might think for something that doesn't seem to physically have eyes.

I thought I was hot shit when I sicked the alien on a group of humans as I hid away in a nearby vent, using my motion tracker to occasionally keep track of it's movement. Well, because of that confounded (at the same time, useful) motion tracker echoing through that tight, vast space, it found me out and dragged me away from behind. It was even pretty quiet about it, all things considered. I thought hiding in a locker was a free pass as long as I pulled backed and held my breath as it began sniffing through the air pockets (this is an actual mechanic in the game). NOPE. That thing's nose isn't falling for that gimmick a second time.

I shudder to think of just how many spots I thought impenetrable until I got had.

Running even when it's nowhere near you can give it a much more prevalent trail to follow once it does finally catch wind. It will then more thoroughly inspect the area around that and unless you're long gone, you might need to play a tense rendition of Ring Around the Rosey until it decides to give up and search the next room. If you decide to stay in that room where it had previously sniffed you out or heard you running, it will keep coming back until you leave or make a mistake that results in your death.

Unless you're lucky that it decides to shrug it off after the first search. You really cannot predict what this thing is going to do. But, there's always a way around it. You just have to be preparred and patient. 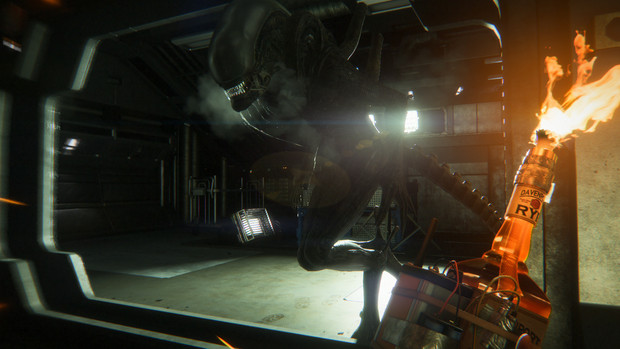 Let's talk about when I had amassed a flamethrower and schematics for pipe bombs, noisemakers and molotovs.

Was some of the tension taken away? You bet. Was it still a tense battle for who was most patient and least gullible? You bet you're sweet candy ass. If anything, now that I had these things, scavenging became much more important. If I wasn't finding all the fuel cannisters that I was, accounting for it's short range and using as tiny of bursts as I possibly could, that flamethrower would empty pretty quickly. Any one of your other tools still require you to prep your shot and aim carefully as to not damage yourself as well as the alien.

Remember: You're not the being with the powerful exo-skeleton.

Even that flamethrower won't always save you completely. The alien can easily charge through the flames, knock you on your butt and damage you as it tries to quell the pain and run to a nearby vent. Even without explosives, you can indirectly cause yourself some damage and be forced to rummage that health pack you were saving for just such an occasion.

There's even more to cover in regards to how this brilliant AI works, but what's under the hood and those individual moments of surprise aren't all that I wanted to talk about. It's how that AI and those surprises work along with those treks from room to room, the waiting and waiting, those minutes-long bouts of extreme tension and release that make Alien: Isolation a memorable experience. 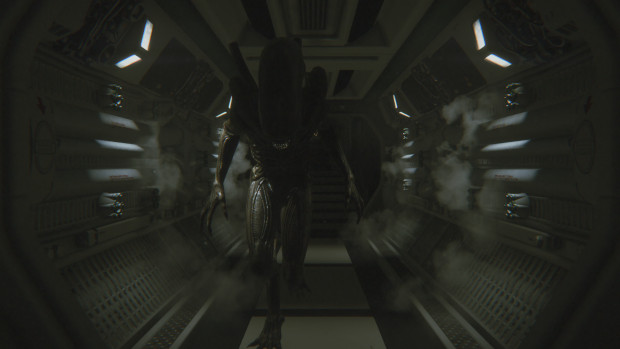 In just that first major section with the alien, I understood the value of total silence and solitude under that desk in that room to the left. About 95% of the time, you're hearing the alien to some capacity, but there are those times when everything is completely quiet and you can almost fool yourself into thinking you're totally safe. Having that silence then broken by the sounds of the xeno's thumping footsteps or rustling about above almost always made me second guess my decision to move from my temporary safe spot.

I can't count how many times when I would finally make my move to hear the alien drop from the vent in the room I was just exiting or his pressence open a nearby automatic door, signaling that I should fucking crouch faster but YOU CAN'T DAMMIT AUGH PLEASE DON'T SEE ME! Walking about in the open, even when it's not actively on the prowl, had my stomach in a perpetual knot until I began to barely notice. It became that natural, playing Isolation.

And when it peaks it's head outward from the corner you're hiding in because you weren't quick or confident enough to find a nearby vent, desk or locker, you shut your mouth and pray that it runs right on by so that you can slowly sneak around and press that emergency lockdown button, temporarily blocking access to the room.

Not one single encounter with the alien is not an "Oh, fuck." moment. Your plans quickly change, you crouch, you back off, and the cat and mouse chase begins. 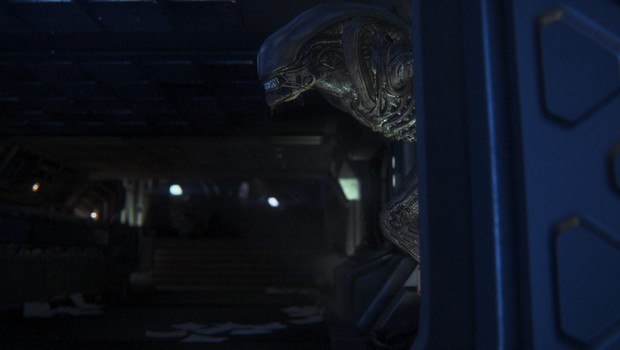 There's even a particular section of this game that is the scariest fucking part of any game I have ever played.

For those who have played much of Isolation already, let's just say it happens around Mission 14 within the reactor control. You'll know what I mean. Even with an almost full tank for my flamethrower, a couple molotovs and enough supplies for several health kits, the way they switch up the xeno encounters for that bit is almost overwhelming.

I had everything that I needed to survive. That the game still managed to make me cower into a locker or hidey hole longer than any other section before that is a testiment to how horrific this part really is, and I wish I could emphasize it better by just flat out spoiling the surprise.

They kept the xeno away for just enough time for the comeback in Mission 14 (?) to be jarring and legitimately frightening. Absence makes the heart grow softer. I was literally shaking, breathing heavily, and dreading every moment they just about forced you to draw your weapon at another enemy, making enough noise to give away your general position. 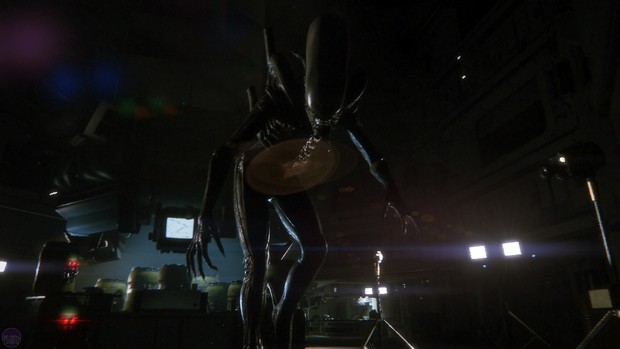 How Creative Assembly portrays the xenomorph in Ailen: Isolation is about as close to a real, living, breathing, thinking creature that video games have ever given us, and I don't say that lightly. That it looks as menacing as it does and that it can kill you so quickly only exacerbates the fear of the hunt exponentially.

Much of the game may be spent on encounters with humans and synthetics as well as the Sevastopol as it's own sort-of-character, but I will always remember the alien. That thing that haunted me through even the most rudimentary of tasks. That if I made too much noise almost anywhere around that ship, that it's rustling wasn't just background noise and that it would come for me... made for something very special.