10 Shin Megami Tensei tracks you should devour with your earholes 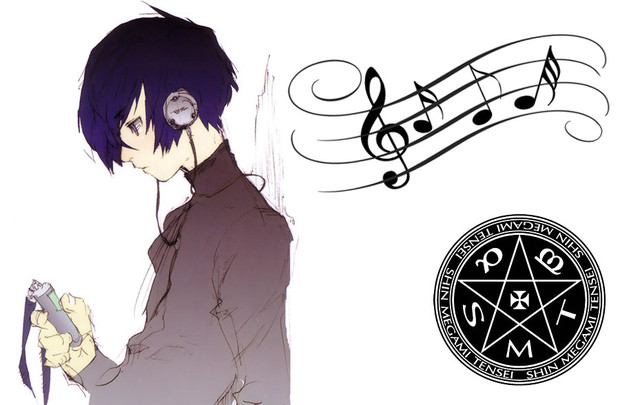 Well, actually, that would sound like a lot if there weren't still so freakin' many left to try! I'm scared to Wiki the exact amount. But, to put it into perspective, we have a Persona game coming just a day before my next birthday (!!!), another (hopefully) sometime in 2015, SMTIV is finally releasing in Europe next month, and a Devil Survivor 2 port is in development.

I think ATLUS has met their quota, don't ya think? 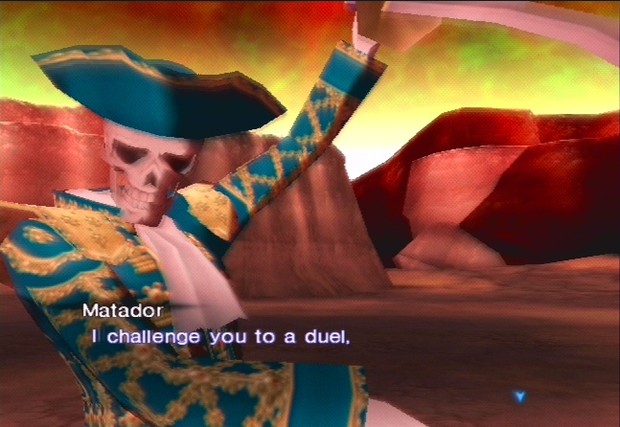 This guy still has a "Fuck you." quota to meet.

One of SMT's standout elements, for me at least, is it's fantastic music. Much of it composed/arranged by Shoji Meguro, who quickly became one of the very very few video game composers I took the trouble to look up and keep in mind for future reference. I had only played Persona 4: Golden, but his work was seriously giving me a hard on.

What Jonathan Coulton is to folk/geek music culture, Meguro is to video game music culture. He can pump out dozens of tracks per game, with multiple games sometimes releasing within the span of less than a year. Tackling multiple genres, channeling all sorts of vibes, and kicking so much ass. This man's creative juices just don't run dry.

Here, I will try my best to justify my love. Stop listening to your wubbysteps or your Anacondas or something because I haven't been able to get SMT off my mind for the past week. I need to shove some of that down your earholes.

For as much as I praise Meguro, this particular track reeks exstensively of "bahbee's first metal recording". Betting most of your track's hook almost entirely on E to F to A# chords and neck slides to a basic rhythm is about as edgehard as wearing sunglasses indoors. It being the first battle tune you hear in Nocturne and coming straight off of the high quality of SMTIV's battle tracks, it was a grand disappointment.

Now? This is preciously why I love it. It's grown on me to where I appreciate it's cheese factor, and the percussion and jutting chords hit just hard enough that I can't help but punch and kick a few holes in the wall in a fit of air guitar and wavy long hair. With a huge, shit-eating smile on my face.

I look to my right, then my left. I may imagine myself in a nice bathroom, with tan/white marble floors and walls that sheen with every glance. I walk out to what seems like a lovely hotel, take the pen at the register, state my name, sign in, then walk calmly to my suite. All the while, I would not be surprised to hear a little bit of the Digital Devil Saga soundtrack. There is a surprising amount of very relaxing music for a game as dark and serious as this.

If I had to place this particular piece within a precise genre of music, it'd have to go with "gloom lounge" or something along those lines. Not quite dark or creepy, just ever so dreary. Soft synth stretches across just about every second, with the heaviest element likely being the guitar chords that spike and then slowly decipate into equally as soft echoes.

It's an interesting track. If "gloom lounge" is already prominent enough to be an actual genre, I need to hear more. If it isn't, I need to bust out GarageBand and start the next big music movement.

Devil Survivor is the one game out of all the SMT titles I've tried thus far that I haven't liked, falling into what usually deters me from most JRPG's early on. Competent dialogue or characterization seems to be surprisingly rare for games that focus so heavily on story.

I mean, I get it. You created a sqealy, ditzy young girl who's one gimmick is to form almost everything as a question and to bicker at her inability to understand anything as a "plot device" to consolidate the player in case he or she ever got confused. It's not subtle or enjoyable, it's just annoying.

Thankfully, the music fares much better. Battle Beat, specifically, vaguely reminds me of one of my favorite Megadeth tracks, High Speed Dirt. Similar rhythm, two-note chords rooted in A galloping away, etc. It's solowork may not be anywhere near as impressive, but it's still a great representation of a thrilling battle. Naturally, making it a nice battle theme. Really comes together towards the end where the harmonizing solos especially shine.

I swear, I keep half-expecting Mustaine to burst in by the end of every few measures and sing about demon summoning and penis beasts.

I don't think I remember this track from my many many hours of Persona 3: FES, but it must've come up at some point. The tragedy with video game music is that, sometimes, the story or gameplay grabs so much of your attention that it's easy to forget that there's probably some nice sounds alongside.

There's a LOT going on with this track. It's the perfect backing to someone holding their head and screaming out in paranoia. Fast and varied percussion, jolting guitar sampling, horrific string and bit melodies, everything layered so damn well and always staying interesting. It's almost criminal that tracks this good and complex are usually looping after only a minute to a minute and a half.

SMTIV probably has my favorite of the SMT soundtracks I've experienced thus far, so believe me when I say I understand picking the main theme is unambitious and that are plenty more awesome tracks that don't get the attention they deserve, but this theme track is goddamned epic. I don't use that word lightly, "epic". It is most definitely is.

At first, I found it dull. But, much like how Fierce Battle eventually grew on me, I've come to love this track. Just not in any sort of ironic sense. The frightening and powerful piano strikes, those crunching pick slides that almost sound like demonic moaning, that howling synth melody towards the end, I just love how every single element of this track perfectly suites the atmosphere and general tone of SMTIV. Grandiose, dark, and desperate.

As I explained with P3's Basement, tracks this good I usually want more and more out of. But, SMTIV's theme tune is so perfectly-paced that I can't complain. It doesn't leave me wanting more, rather.. it leaves me satisfied. There's nothing at all missing from it. Frankly, it's fookin' perfect.

There's something to be said about someone who can successfully tackle both metal and J-pop. Who do I have to sell my soul to for that kind of feat? Eh? Jesus, Meguro. You're #based as FUCK. Can we, like, take a second to appreciate that? That takes more talent than most might think.

Those sexy bass rides under what is a great use of the typical *high-hat, snare, high-hat, bass, repeat* sort of beat, and the beautiful melody that doesn't go for too many intense highs while remaining just as soulful... it's about as solid, dignified, and enjoyable as pop can get. Pretty much sums up all of Persona 4's pop tracks, really. "Catchy" is such a great quality when it's not exploited through a song that's lackluster as heck otherwise.

Have you ever gotten anxious or nervous from the sound of slowly dripping water? That's literally all this track is, outside the ominous sounds of wind echoing through a cave and that single cello note that repeats throughout.

This is not necessarily a legitimate entry for this list. Just a cool little Pavolovian-esque experiment. Personally, about 5 seconds in, my heartrate began to rise. Guess it's sort of like those suicide myth's surrounding Pokemon Red/Blue's infamous Lavender Town track. Immediately sets you off. *shudder*

Sans your Isley Brothers' Greatest Hits CD... that which is now only but a Spotify playlist, nothing will get you and your significant other in the mood quite like this track. Or, if you're by yourself, that's okay too. Somebody's doin' somebody.

Interesting how tracks like this might be just as prevelant to Meguro's resume as pop or metal. I can't get enough of that MIDI acoustic. Such an innocence to it. However, this is in serious need of some love-makin' lyrics. The saxophone, the slow drums, the keys, the snappy synth bass, it's perfect RnB fodder. That's my lone criticism of this track: Something's definitely not right when I have nothing to sing to myself, bumpin' this as I browse FurAffinity or Gelbooru.

Besides that, though, I can't really say much else. It's just a pretty darn chill piece of music.

Being super familiar and fond of the SMTIV version of this track before setting up this blog, I decided to take a trip through video game music history and dig this little number up.

I will admit, I haven't touched the original SMT. I just love this song and hearing it compressed into a bit track is definitely something else (in a way, I think it sounds better). It never gets boring, arrangements are always changing and surprising you while not going overboard as to have it suddenly feel like a different song. That it only consists of a church organ and keeps me engrossed like that is also impressive.

Would probably suit as some pretty nifty studying music!

"You In Wonderland" - Persona Q: Shadow of the Labyrinth

And finally, a little surprise for those who weren't aware of the fact, but Persona Q's soundtrack has been out in it's full glory for about a month. However, just a few hours ago (as of typing this), the soundtrack has begun uploading song to song by user Bandpuffs, making highlighting You In Wonderland that much easier.

I have yet to hear anything resembling a tune like this within SMT, so this was very interesting to witness as I was attempting to breeze through every track in the bulk upload video. Accordians, now? Pretty much completes the musical repertoire of this franchise.

Quirkier tracks like this usually loop fairly quickly, but this is surprisingly fleshed-out. Complete with orchestral breakdowns towards the middle point and contrasted next to the "big top" accordian melodies, it's a fun and interesting piece that gives me plenty of hope for the rest of the PQ soundtrack. More stuff like this and the battle themes, please!

In a couple short hours, I'll be heading off to the Alamo City Comic-Con! I'll be showing off my Vaas cosplay, hanging out with fellow geeks, and hoping to meet some famous folk. Especially hoping to find Troy Baker and get him to sign my copy of The Last Of Us: Remastered. I would have Steve Downes sign my Halo 3 LE Master Chief helmet, but that'd be a burden to carry around.

I'll hopefully have a blog about that coming soon! Really really excited!