You're Going Down For The Count! I Call DIBS on Little Mac in Smash 4! So, Super Smash Bros. 4 came out on the 3DS a little more than a week ago in Japan, revealing the final roster for us to see (don't worry, I won't spoil it here for those of you who don't want to know, and I ask anyone who reads this to do the same). The roster was rather impressive, and I feel that Sakurai and his team should be commened for putting together a diverse roster of characters to play around with. Despite that, I still wasn't sure who I was going to use as my main. Indeed, a lot of the characters looked really fun, but none of them I felt really clicked with me as someone I would want to main.  Rosalina is my favorite Mario character and is from my favorite game of all time, but seemed too techinical for my tastes. Greninja looked cool, but I usually don't main Pokemon in Smash. Robin and Lucina were both from my favorite game of last year, but I needed someone that packed a punch. I needed someone who could hit hard and fast, who could get in close and wreck his opponent, but who was fast and nimble enough to get out of harm's way. I needed someone who had the eye of the tiger, who could float like butterfly, sting like a bee, and all those other Rocky refernces. And then it hit me.

After months of uncertainty, I felt so foolish that the obvious answer was right in front of me the whole time. And so, my fellow Dtoiders, I come to you now as a changed man. I have seen the error of my ways; I have seen the light, and it is beautiful. It gives me great joy to finally utter these sacred words at last; I call DIBS on Little Mac for Super Smash 4. Little Mac is everything that you want in a Smash character and then some. He's got the heart of a champion, and the power to back it up. He's taken on some of the biggest, baddest, meanest boxers the WVBA could throw at him, and lived to tell the tale. Little Mac is the greatest character ever, and here are just a few of the reasons why I'm going to main him.

1. Little Mac Is Great At Taking On Impossible Odds At first glance, you might be thinking that Little Mac doesn't stand much of a chance in Smash. I mean, the starting roster alone includes a pair of brothers that shoot fire from their hands, a Peter Pan knockoff who's chosen by the gods to wield the "Blade of Evil's Bane", a giant gorilla, two fire breathing reptiles, three legendary swordsmen and a mage, a goddess and her angel errand boy, an intergalctic MILF, a ninja frog, a robot whose nickname is the Blue Bomber, a bounty hunter that shoots missles from her arm, a British guy who can see into the future, and Captain Falcon. Yeah, those aren't exactly great odds, and to say Little Mac has an uphill battle is an understatement. But you know what? That's just an average day in the life of Little Mac. Time and again, Little Mac has proven that you should never under-estimate him, as doing so is bad for your health. In his first game, Little Mac dreamed of being a champion boxer, but no trainer would take him on because he was considered too small to box. Things changed when he met Doc Louis, a former heavyweight boxer himself, who took Little Mac under his wing and taught him everything he knows, including his patented Star Punch, and before long Little Mac was working his way up the World Video Boxing Association, before ultimately taking on Kid Dynamite Mike Tyson himself (which I'll cover in a bit). So no, I'm not worried about Little Mac; if anything, I'm worried about the other players. Which brings me to my next point.... Little Mac doesn't have a gun. He doesn't have wings, he doesn't shoot lasers from his arm, he doesn't have a piece of a sacred triangle in his hand, nor does he possess a sword created by a divine dragon. He doesn't shoot electricity from his cheeks, he doesn't have Pikmin, a Toad, or Lumas to fight for him, and he isn't Captain Falcon. So what does Little Mac have? Pure, raw power. His punches are fast and powerful, which he uses to wail on anyone who makes jokes about his height. He can bob and weave like the best of them, and you can't do a thing about it because he can get up close and personal when he has to be, and clear out when he has to cool off. And that's not even considering his unique Star Punch, which is powerful enough to KO any poor sucker who was too stupid or slow enough to get out of the way.So yeah, keep your Triforce of Courage and your magic books and Power Suit. None of it is going to do you a damn bit of good as Little Mac sends you on a one way trip to the hospital; hope you don't mind the food. 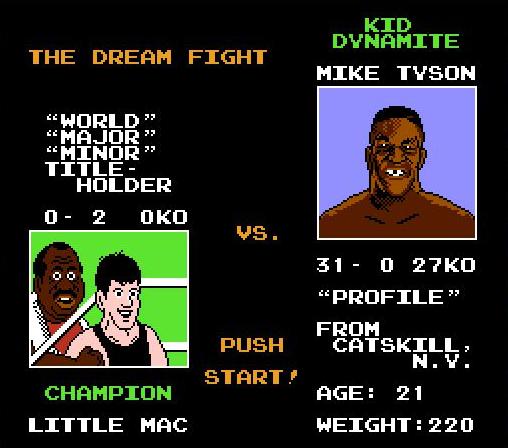 THE FIGHT OF THE CENTURY!

Just looking at this picture gets me pumped

I saved the best and most important reason for last. Little Mac wears a pink jumpsuit, which is actually one of his alternate costumes in Smash 4. And since everyone knows that pink is the manliest color ever, we can conclude that Little Mac is a manly character since he wears manly colors. "But Goof", I hear you say. "Pink isn't a manly color! It's a girly color that only girly girls wear!" Do you wanna know who else wears pink? Batman. And Captain Falcon. And I think we can agree, both of them are people you don't want to mess with. Kind of like Little Mac.

And those are the reasons why I'm calling DIBS on Little Mac in Smash 4. You're probably reading this and saying to yourself "man, that intelligent, handsome, modest gentleman GoofierBrute really convinced me  of the awesomeness that is Little Mac. I can't wait to use him!" Too bad, because I already called DIBS. Don't worry though, I'm sure there are other awesome character you can use, like Mario....and Link...maybe Pit, I guess? Of course, it isn't going to matter who you pick to use, because in my hands, Little Mac is going to be unstoppable. We'll crush any and all opposition that comes our way. And we'll have a blast doing it. So if you see someone online playing Little Mac, you should probably run, since I play for keeps.

See you on October 3!