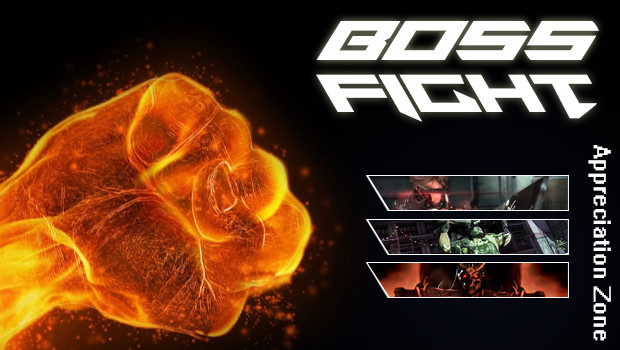 Ladies and gentlemen, I'd like to welcome all of you to the sacred place where we worship the roughest, toughest and worthiest of opponents. You are entering the Boss Fight Appreciation Zone!

"Why are boss fights so awesome?", a few of you may ask. The simple answer would be the fact that they serve as the ultimate challenge. All the skills you've learned on your journey are finally being put to full use, as you go head to head against a foe who is more or less on equal ground with you (as opposed to all those weaklings that you regularly beat up).

But boss fights really do mean more than that. They often define a game's vision, personality and overall difficulty. Good or bad, the bosses will be remembered, as each one represents a high note. That's why, in action games of any kind, the bosses are very important.

"What is this, then?", others may ask. Well, to put it simply, it's a list, but it's NOT a top 10 list. There aren't even 10 bosses on here. I couldn't do that anyway, it would be like the Sophie's Choice of top 10 lists. I love boss fights too much, and there are too many great ones out there for me to put some above others.
Instead, I'm gonna talk about some great examples of boss fights, and encourage you to do the same. That's another part of the blog's purpose: to create a discussion!

I want to hear your opinion, regardless of what it may be. I find it interesting, and so do countless others, so I urge you not to shy away from sharing your own favourite boss encounters from any game.

So, for this round, here is my dream team of heavy hitters (not to be confused with heavy Hitlers, which is a different thing).

The Arkham games are great! They all play like a dream, thanks to a great sense of flow, and they seamlessly switch between vastly different types of gameplay, the most prominent of which being combat and stealth. The games have some interesting bosses as well, although most of them are focused on raw combat, as this is the most natural fit for a boss fight. There are, however, two notable exceptions to this: Scarecrow in Asylum, and Mr. Freeze in City.

I picked Mr. Freeze primarily because the fight has much more depth and strategy to it than Scarecrow's. With Scarecrow, it's just a basic platforming segment where you have to wait for a bit, so that you won't get seen. Mr. Freeze, on the other hand, is like some sort of giga-mook, only way deadlier. You fight him the same way you'd fight any other armed thug (by sneaking up on him), but Freeze is tough, and won't go down with one takedown. Crucially, he also learns from his mistakes, drastically increasing tension as Batman is slowly running out of options.

Going at an entirely different pace than other Arkham City bosses, Mr. Freeze easily stands out as the most memorable.

Ratchet & Clank has no shortage of bosses, and most of them are pretty great. Slime monsters, giant robots, alien queens, whatever sci-fi villain you can think of, it's all here. But my pick for this round is the fairly unique and comical battle against Courtney Gears.

Ms. Gears is an obvious parody of Britney Spears, who nobody talks about anymore, so this particular boss is basically a dated reference. Thankfully, the fight itself is anything but dated. It's every bit as fun and crazy as it was back in 2004. What makes it so good has a lot to do with the way that it plays to the strength of the series. It comes at a point where most players will have gathered a sizable arsenal, and you get to unleash all of it on a robot pop star and her endless supply of back-up dancers. It's nuts, and that's why I love it!

The fight itself takes place on a circular arena, from which you can easily fall off, and you spend a lot of time being pursued by the back-up dancers, with Gears herself attacking from a distance. This goes on until a certain point in the fight, where she teleports out to deal with you herself. You can be attacked from anywhere during the fight, and being aware of you surroundings is very important here. It's a very carefully structured fight, yet it has a wild chaotic feel to it.

To top it all off is the music, which matches the goofiness of the situation very well, while also managing to be pretty dramatic. It perfectly wraps everything up, and makes the fight stand out even more.

One of the most underrated things that Super Mario Galaxy did has got to be letting you swing ghosts around by their tongue. It makes no sense! Ghosts shouldn't even have tongues. But it's amazing to do, so I don't care.

What I do care about is the boss that's designed around this mechanic. Its design is one of my favourites from the game. A big pile of rocks shaped like a head and two hands, with glowy eyes, and some sort of evil spirit inside of it. Actually, it looks a bit like the evil spirit is the real boss, and the rocks are just a defense, which is even better!

At first glance, it seems like this is the type of boss that is simply going to punch you a lot, while you have to dodge until there's an opening for you to attack. But that is far from the truth. No, this thing punches, raises spikes from the ground and creates explosive ghosts. You then have to swing said ghosts around in order to do damage. Much better!

This boss is at once fast paced, goofy and tense. It's my favourite boss from either Galaxy game, which actually says quite a lot.

Phalanx - Shadow of the Colossus

I personally find it difficult to talk about boss fights without mentioning this game. Shadow of the Colossus is like the king of the bosses! All of them are huge, spectacular and fully organic. I could have picked any colossus from this game and nobody would question it, so I might as well pick the biggest of them all.

Not that size is the only thing Phalanx has to offer compared to the others. This fight is amazing for numerous reasons. It starts off slow, with the colossus flying high above you, beyond your reach. You need to get it down, and you do so by shooting arrows at its weakpoints. Once this is done, however, you still need to climb it, which is difficult. The damn thing's fast, so it's a good thing you've got a horse. From this point on, you need to catch up with the beast, get close to one of its wing thingies, and jump off! You jump off your horse! How awesome is that!?

After this, you do the usual climby-stabby, but the creature is still on the move across the desert sky, so holding on is very important. It's all great, but it's the sense of speed and scale that makes this boss unforgettable.

How do you make sure that your game is so good that everyone is pissed when it doesn't get a sequel? Ending it on a cliffhanger definitely helps, but a better way is to make everything in the game feel like a big deal, and that's exactly what Beyond Good & Evil does. It does so largely through music and camera angles.

Those last two words happen to be very important here, because that is what makes the Reaper boss as memorable as it is. On a basic level, it's very Zelda. You find an item, and then use that item to fight a boss. It's been done, but Zelda was never this cinematic about it, and that aspect does add to the boss's feel.

Our green friend starts off by jumping around on some platforms above you, while trying to hit you with its projectiles. What you need to do is to use your newly found disk launcher to piss it off, at which point it will jump down to attack you directly. The camera switches to the Reaper's perspective, allowing you to get a good idea of where it's gonna land, and to stay away. Then you attack it directly.

It isn't the hardest boss in the world, granted, but I still enjoy it a lot for its presentation, and it's still genuine fun!

I think this is a good one to end with because, well... name..

But yeah, this is another slow, stealthy one, and it's one that everybody loves, and everybody knows why it's amazing, so I won't have much to add. It's very slow paced, extremely tense, and a perfect demonstration of how to make a stealth-centered boss fight.

My only gripe is that Mr. End only shoots sleeping darts at you, which doesn't do any real damage. While the tension is real, it would have been much more so if you took actual damage from his attacks.

But yeah, it's still a very clever fight, and everyone loves it, and blah blah. Oh, and you can avoid it entirely, if you dislike stealth. Even though you're playing a stealth game. Of course.

That's all I got for now!

I personally left out tons of awesome bosses that I could talk about in similar detail. There are so many great bosses, and all of them deserve their share of praise.

Now on to yourself. What boss fights would you like to gush about? This is the BFAZ after all, so let out your inner kid and type out some kind words about boss encounters that make you excited. Don't worry, I'm sure someone will read them. Like me! If I'm not busy at the moment. But I'm probably not. So I probably will. So you're good, right?

But seriously, write something or get out.