7:54 AM on 08.18.2014 (server time)    0
[So my PC decided that today it was going to stop working, it's a power issue brought on by the case. I was looking for an excuse to write my Transistor review anyway, so why not now? Just to prepare you, this features my - unprofessional - opinion. Sit back and relax: I've to unload my under-used reviewing skills on ya'll, and the first three rows may get wet.]

It took me a while to get around to Transistor - SuperGiant Games' successor to the hit game Bastion. I enjoyed Bastion, I knew this would be different, but I was looking forward to the charm hidden beneath a simplistic game. I found out, albeit slowly, that Transistor, while a great game, falls flat (dya get it, because music) with more than a few questionable design choices. 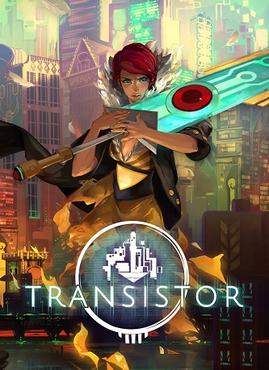 Ok, the story is basically a retroactive tale to figure out what's going on, and simultaneously a progressive tale to push the story forward. You play as Red; a former singer - I say former, as she had her voice stolen - who wields the Transistor: a weapon/USB stick that holds the 'soul' of her boyfriend who was impaled with it. Their home - the City of Cloudbank - is being overrun by The Process: think weird, nonspecific creatures that want to convert everything to it's original state, i.e. white-washing the whole city, who were unleashed by the Camerata: a group of assholes who use the whole 'we don't want shit to change' excuse to kill millions of people. Red and the Transistor have to stop both the Camerata and the Process, and save Cloudbank. The player is only given hints as to who Red is, in that she's a singer who has significant influence in the city, and no information on who her boyfriend/talking sword was. Over the course of the game, bits and pieces are given to the player to allude to what's going on, as the city slowly becomes overrun by the Process.

Look, I'm going to put it to you this way: the story isn't great. It's inability to actually answer any of the important questions by the end of the game makes the entire affair a little pointless - backstory is filled through unlocking all the slots in the Functions: the abilities you use to kill things - but there's no real sense that the developer had a solid idea of what the story was meant to be. It only hints at why things have happened, even the explanations given to the player are 'come to your own conclusion' bits and pieces that never really culminate in anything of worth. The real issue is that in an interactive medium with voice-acting, they really didn't have to split the explanations 80-20 in favour of written information, that you may never get (I'll explain this later). And even if you get all the information available, the whole reason for Red's significance doesn't adequately explain anything. Huge chunks of explanation are missing, and it shows.

Transistor is a mix of real-time and turn-based gameplay. You're given access to Functions: the 'souls' of other dead members of the community you place inside the Transistor, that each give their own abilities, either offensive or defensive. They can be placed in one of four slots as attack Functions, each of which has two potentially unlockable sub-function categories that offer bonuses to the primary functions, and there are four slots that offer passive bonuses to Red. You also gain XP from killing Process, and can rank up and receive more Functions - albeit limited in amount - and Limiters, which grant more XP by making the game harder. When you kill an enemy, they drop 'cells' that you can collect for XP, which have a timer that counts down to when enemies can respawn from them. It adds some tension to the combat, as a Limiter will add shields that need to be broken before collection - an interesting mechanics that struggles with the cooldown of the 'Turn()' ability. In combat you have the freedom to move around the arenas of battle, and can activate 'Turn()' to freeze the situation and plan your attacks within a set limit, before activating it and blitzing through enemies. The only downside is that is take time to recharge and all functions are essentially useless in this cooldown mode. You've a health bar, of course, and when it reaches zero, instead of outright dying, you lose your most powerful Function and continue fighting. There are also 'backdoors' which bring you to an Oasis-like area where you can complete challenges for XP. They're useful for trying out new Functions, and after completing each challenge, you get some of the game's great music tracks to play. Functions are also limited (though as you gain levels certain unlocks boost the number of functions you can have), which means you need to be strategic in your choices, but effective. This means that the player needs to know the Functions inside and out, which is an interesting way to get them to engage with all aspects of the Functions they wish to use.

So many Functions, so much choice...some you'll never even use more than three times.

So, with the basics laid out, the question to ask is: does the system work? The answer is: sometimes. It's a simplistic game that has annoying levels of complexity within. Among the biggest issues of the game is how limited the XP and ranking systems are. They grant you bonuses, sure, but it simply slows down your progression by keeping you within certain limitations to make the game seem more challenging than it actually is. XP is gained at a snail's pace, to the point where Limiters aren't just needed, they're necessary to get the more powerful Functions for later in the game. Functions also gain more backstory when used in certain slots, so to get the full story, you may have to use Functions in places that you'd rather not, suffering through gruelingly difficult combat situations just to figure out the full story of characters.

When you finally do gain a level, you're given a limited choice of Functions to choose from, and what you're not told is that one boss fight in particular is damn-near impossible without a specific Function you'll avoid because it won't seem logical to have in your arsenal when you get it. The game limits your XP and choices to keep you just weak enough to lose, but strong enough to progress - which would be fine, except for said boss fight - but one of the bigger issues is the fact that you'll feel your play-style struggling against the game's sense of difficulty. I had a set ups which, by all accounts, had allowed me to beat bosses and enemies fairly quickly and efficiently, while I changed around some Functions now and again, the game simply threw more enemies at me than I could manage, so I had to reevaluate and rebuild my set up once again.  The Process gained more irritating and powerful enemies, while I could only react within my confining, irritating limits. The problem is that while there isn't an issue in having to adapt, one Limiter in particular (which remember, you need to progress effectively) not only breaks your most powerful Functions when you lose all your health, but breaks all sub-Functions too. When this happens, you could be out a total of three of your best Functions, forcing you to restart from a checkpoint because the game's slow progression leaves you little to work with around the three-quarter point of the game. You hit a dead-zone which attempts to bring in artificial difficulty, spiking the enemy power and doubling it with the necessary Limiters. It's annoying, and can cripple the game entirely if your play styles or strategies don't match what the developers designed.

The Turn() concept adds strategic elements to combat, but has more than a few drawbacks.

The game is beautiful, just heart-breakingly beautiful. It's just...I'm putting in pictures, because it's hard to describe. Words don't convey how amazing it looks, the art direction just works; it's bright, colourful and matches the setting perfectly. It's like cel-shading and a colour-palette had a baby. If nothing else, the game looks amazing, with the stark contrast between the white/red/black of the Process and the colourful city of Cloudbank (which can have it's weather changed by terminals throughout the city) perfectly balanced to reflect the progression of the Process threat. That's all I have to say on the matter, the pictures explain more than I ever could.

Again, something Transistor does amazingly well is the soundtrack, which is full of great, original music. There are dozens of songs and ambient music tracks that cover a range of situations pitch-perfectly, and resonates with the situations they're played with. There are some mildly interactive cutscenes which convey the dire or humourous tone of the situation well, and it'll bring a smile to your face regardless. The voice acting of the Transistor/Red's boyfriend is superb, showing that there's at least some ability for the player to see a kind of rapport between Red and the Transistor, which alludes to them actually knowing each other before the events of the game. At times, however, the voice-acting falls flat. Some of the Camerata are conveyed in an overly-whiny manner, and even the primary villain you face is underwhelming; they're calm and collected, but in the least threatening manner possible. While the soundtrack is great, and you can even make Red hum at the push of a button, there are some elements that obviously needed a lot more work...the underlying issue with most of the game.

Transistor is a small game with seemingly a lot to offer, but limits the player in such a way that, when they finally finish the game, they'll notice the severe lack of anything significant under the hood. SuperGiant Games wanted to tell a story, player agency be damned, and that hurts Transistor on many levels. It also wasn't as expansive as Bastion, and is geared towards a 'new game plus' mode. Overall, it's a great game that suffers from a developer's conservatism, offers snippets of player choice, only to stomp agency out entirely, just because. A great art-style and soundtrack help salvage a lot of good will, but overall, Transistor failed to reach its potential. It's a great game, but disappointing.

- Amazing Soundtrack
- Excellent Art-Style
- Combat can be rewarding and fun
- Function experimentation allows for unique play-styles
- In-game banter is interesting and adds depth to the world
- Weather changes give the player a sense that Cloudbank is a living, breathing city.
Difficulty, at least in the beginning, is just right and rewards strategic thinking.

WTF? moment: The beginning, the end, the total lack of any explanation of any of the smaller story elements. General incoherence.
#CommunityReviews
Login to vote this up!