You know, sometimes I can’t help thinking that I’m special. One of a kind. No, no, it’s got nothing to do with megalomania (or at least I hope so) – it’s just that too many times I’ve heard, “Nobody plays Grand Theft Auto for the story”. Well, I do! My favourite games in the series being Vice City and San Andreas, I’ve played them countless times. And all of these times I followed the story, with only a few distractions for side activities. Wreaking havoc in the streets and then escaping the police, shooting half a precinct until they call the military and drop a tank on me? No, not my thing.


One of the reasons for this is that my own personality tends to leak into the games I play, and if I’m given a choice I just can’t force myself to play a bad guy. If I’m given dialogue options I usually pick the nicer ones. If I’m offered a non-lethal approach I take it. I just can’t do anything about it, even if I sometimes wish I could.

The second issue is how I see the games’ protagonists and their limits. Most GTA leads feature the “honorable outlaw” archetype. While Vice City’s Tommy Vercetti might be more of an asshole than some, selling drugs off an ice cream van or taking hit jobs for opposing gangs – I don’t think even he would take pleasure in massacring unarmed citizens (even despite “Mayhem” missions existent in the game). Trevor Philips was a different story, but he felt more like a mentally sick dude unable to control his fits of rage –  but even he had a couple of redeeming moments. 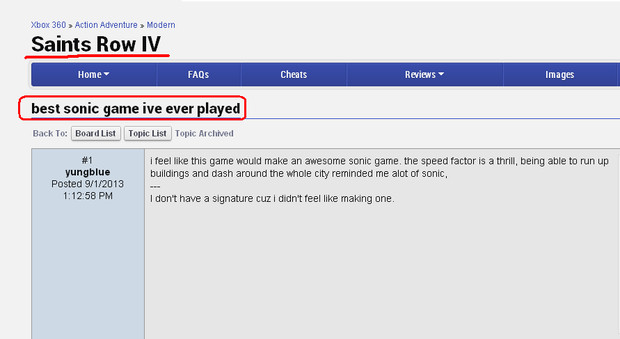 Hey, why not let Volition make the next Sonic the Hedgehog game? Uh-oh, looks like the Sonic fans are after me now...gotta scram!

4. The missions. Now, if I were to describe the game’s missions with a single word, it would be variety. While a lot of sandboxes have the same recurring shootouts, races, car chases, police evasions, tail missions (ugh) and occasional police-evading car-chase shootouts, Saint’s Row IV has got activities suited to every fancy. Well, okay, most of the fancies. :) While I, for instance, was rather dissatisfied with most of combat-oriented missions, I had an absolute blast with climbing alien towers, going on stomping rampages or playing ragdoll to the traffic with a dumb smirk on my face. And no tail missions, thank goodness, no tail missions! Yeah, that alone makes it a good game.


Now, as a bottom line, I still can’t say Saint’s Row IV is among my favourite games. But it definitely is one of the best sandboxes for me. It was a consistent, varied, shamelessly fun experience, and it made playing a sociopathic asshole feel sooo great... Way to go, Volition and Deep Silver. Way to go.
Oh, and that sing-along ride was totally rad (I just had to mention it in the most irrelevant way possible). :)
Login to vote this up!