So now I'm gonna talk about the (potentially) upcoming video games that give me girlwood!

This one is set in stone, and it's gonna kick so much ass! Arkham Asylum is damn good, and Arkham City is one of my favourite games, so this is going to be a big deal for me. I am in love with the idea of driving the Batmobile in one of these games. It is all I ever wanted from a City sequel, and it looks even better than my wildest dreams.

No, of course it's not gonna suck, it's gonna be amazing! The original Abe's Oddysee is also a favourite of mine, and this remake/reimagining/reboot/whatever has 'YES' written all over it. It is gorgeous to look at, and the gameplay seems to have been tightened up. The addition of scrolling is really neat as well, and it helps making the environment come to life.

Oddworld's official twitter has revealed that the game is going to be at E3, and I'm looking forward to seeing more of it there.

This is totally not going to happen, and I won't even dare to hope, but if it did, I would still be pretty excited.

Would be the same as above, but I actually think this is a bit more plausible at this point, due to Sony's current position. Maybe if I cross my fingers extra hard this year.

A new DOOM is definitely being made, whether we like it or not. We might have reason to like it, though, as the most recent Wolfenstein is apparently pretty competent and surprisingly open ended and fast paced, which is exactly what I expect from a DOOM game (fuck DOOM 3).

Either a new game, or a rerelease of the old ones on PSN. The fact that the latter has yet to be done is still mind boggling to me. It's such a sensible thing to do, yet for some reason, it's not being done. Instead, we get a bunch of mediocre movie tie-ins. Excuse me for being bitter!

The Xbone (I refuse to call it by its real name, cause it's stupid) used to be known for restrictions and terrible features, but I think it still has a chance of being a system with some cool games. One of these would be Sunset Overdrive.

Now, while this game is a bit too 'zombie apocalypse'-esque than I would prefer, it makes up for it by looking like legit fun. It helps that Insomniac is doing it, as those guys are quite the fun gurus.

(As seen on one of those 'super legit' E3 leak lists): 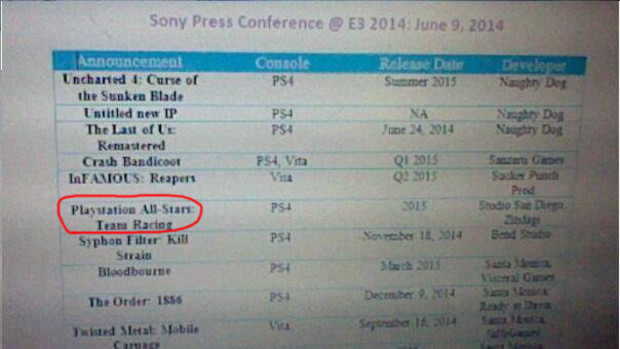 Fucking yes much? I didn't even know I wanted this until recently, but holy shit, that is the best idea! The Playstation All-Stars cast, but in a kart racer, driving around on tracks based off of different games. A Metropolis track! A Rapture track! A Time Station track! A Shadow Moses track! An El Dango creaming his pants track!

I know it's silly, but fuck it, so is the fighting game idea. Give me a kart racer with Heihachi and Sir Daniel!


none of this shit is gonna come true and I'm gonna cry
Login to vote this up!