9:22 PM on 05.25.2014 (server time)    0
Wanna know something weird? How about I share a little history with you fine folk flocking fervently around Destructoid?

As a kid, I never got to play many games that I wanted to. My dad's the one who would always bring me games for any console I had at the time.
It's kind of a fond memory of mine, actually... My dad works in another country, you see, and whenever he would come home after being away for a few months, he'd always have a little something for me. Besides wanting to spend time with him (my dad's a really cool guy), I sure as fuck would always be anticipating whatever shiny new game he had hidden away somewhere in his briefcase.
Yeah, he only bought like, 2 or 3 games every trip, and on top of that, he only ever bought the games he liked, or that he thought I liked, or would like. And as a result I never got to truly experience all the great games that would be out for any console at the time. When I was a kid, new games were like, the second coming.


A form of escapism I had for that was, since he brought home lots of gaming magazines as well as comics (yeah, those are kind of a thing I loved getting too) ontop of the games he would bring home, I was able to see all these awesome, cool games and stuff that I knew I'd never get to play. The magazines were pretty straight forward, given their content, but the comics would also usually have these game ads strewn about every handful of pages, ads that I would remember for a long time, like Klonoa: Lunateia's Veil, or Micro Maniacs, even remember an ad for Majora's Mask, and it looked awesome, like they took the skyline of some city in the USA and pasted the Moon above about to crash down into it, that ad stuck with me the most.

After a quick google search, it turns out I was kinda wrong, but close enough.


But yeah, anyway, what's all that got to do with what I named for the title of this blog? Well, put simply, experiences like that would carry into something that I always found kind of strange for me... I would never get to play any of these games, yet for some reason, I loved them.
I feel like I cannot explain this concept properly...
These games, from their looks, to how hyped they looked, I wanted to know more about them. Hell, I wanted more anything about them.
When I had access to internet, I would read guides, walkthroughs, wikis, anything about these random games, and they'd stick with me even more. I even know some games through and through, secrets and all, because of that, despite never having even played them.
A lot of these games also had distinct art styles, or such crazy looking characters, that I often drew them despite knowing next to nothing about them.
On some level, I wanted to play these games so badly that it felt like I've known these games for a while now, and that they'd become classics to me.

Now, how about some examples of these games that I love so much, but have never actually played? 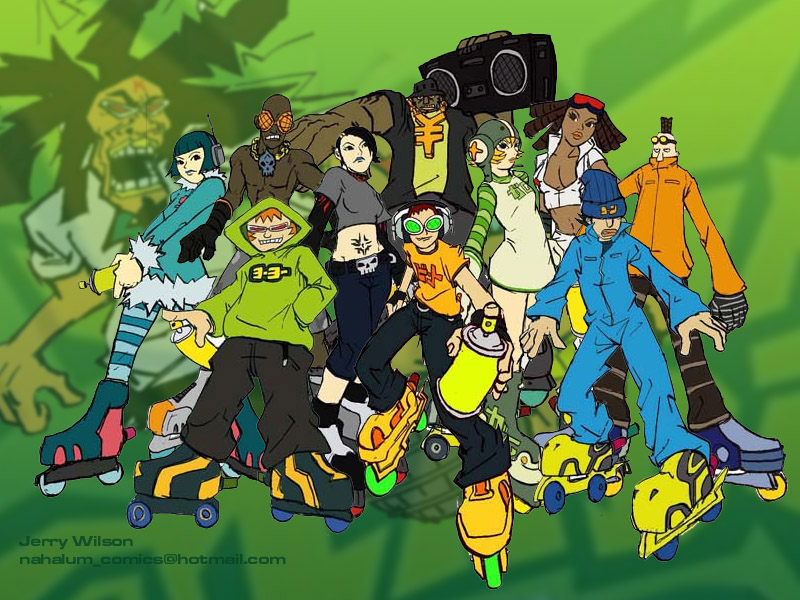 No, seriously, look at these crazy fuckers.


I once saw this game being played at a store a long, long time ago when it first came out on the Dreamcast (A console I love but never actually played, lol), and at that instant, I knew, this game was one of those games that I love, but I'll never get to play.

JSR is also one of my many inspirations when it comes to my art.
Just look at this piece I made a long time ago.

How about a game that's a bit older?
Well there's NiGHTS Into Dreams (Did I capitalize that properly?).
Although, to be fair I also still have not played the Wii game, which I heard was pretty bad but... that's not gonna be a part of this discussion. ;3
There's just something awesome, and whimsical about NiGHTS, to me that is. Ironically, I never had a Sega Saturn, which is yet another console I love but never actually got to play, and ironically yet again, most of these games I will mention are SEGA games, weird no? But yeah, there was just something awesome about NiGHTS, he/she/it looked cool, and all that crap. I was lucky enough to have a friend that had a Saturn and a copy of NiGHTS, but god damn he fucking sucked at it, and he never once let me play it, or even try. Yes, he was a stingy little fuck, but I guess I was content just watching the awesome shit going on on the t.v. screen.
I liked NiGHTS so much, that I even had a phase in my art where I drew him a lot. But yeah, no example to share on that. Seriously, look at this jester-ass mother fucker playing his invisible flute... thing. No seriously wtf is this pose even, I never got it. lol

There's gotta be at least 50 other games I could write about, but at the moment, I cannot recall them, and I don't wanna bloat this blog entry like a rotted beached whale on a hot day.... though that would probably have exploded over a  bunch of beach goers and essentially be an empty sack of it's former self and- uh, yeah, stuff and junk.

So how about you guys? Got any "games you love, but never actually played"?