On Swordfights in Video Games

10:36 AM on 05.21.2014 (server time)    0
We all love a good video game swordfight, don’t we?
…Okay, some of us prefer gunfights. So what!
Eh? Brawlers? Yeah, I guess some people love brawlers better.
And then there are those weird folks who stand against violence in video games…
Alright, alright, I got it, let us not generalize. I love a good swordfight. Be it juggling opponents DMC-style, hacking through the battlefield in Dynasty Warriors, slicing goblins limb from limb in Blade of Darkness or cowering behind a shield while trying to outmaneuver enemies in Dark Souls – it all appeals to me. So whenever I get to create my own character in a fantasy RPG, a sword-wielding warrior is my usual choice.
But what I like even more are duels. A good video game duel can fill me with adrenaline, make me feel like I’m really fighting for my life with a sword in hand… too bad a really good duel is so rare these days.
I’ve given some thought to what would an ideal video game duel look like to me. And while it is, as usual, all in the details, I’ve come with a set of general requirements. Challenge is the first thing that springs to mind; an opponent easily defeated is easily forgotten. But, on the other hand, make an enemy too hard, and all you get is frustration. Recently, there was an excellent frontpaged c-blog by Wrenchfarm about fighting bosses of your own size (and, usually, skill). And while I fully agree with the guy on that, it’s only one of the prerequisites of a good sword duel (and sword fight in general) for me.
NOTICE: I’m going to back my points with examples of my favourite VG swordfights, so there might be minor spoilers from games I mention. Nothing serious though.

1. Focus on defense. Judging from my experience with video games, there are two major categories sword fights can be attributed to: spectacular and more-or less realistic. Spectacular fights include (but are not limited to) multiple combos and super-powered strikes, air juggling, pre-rendered finishers – you know the stuff. And basically, those kinds of fights are more focused on offense, on dealing more damage to your opponent’s health bar than they deal to yours. A few hits taken are not a problem, we’ve got plenty of health to spare, and can occasionally heal ourselves if it gets too close…
But in a real sword fight any hit you take can be fatal. Even if it doesn’t connect with a vital organ, the pain and bleeding will lower your chances of survival considerably. So it’s blocking, parrying and evasive maneuvers that you would utilize first of all. And then, when the enemy gets angry and impatient and opens up… wham! Well, of course, making a game with one-hit-kill fights is going to be too risky, but what I believe is you have to make each hit count.

2. Outwitting your opponent. So, we’ve learned that the best offense is a good defense, and that recklessly attacking can only get you killed. But the same goes for the enemy, too. Is it really fun when your opponent is attacking you head-on (which is, incidentally, the case in most games)? I say, it’s not. A duel is a battle of wits, as well as skill. So your adversary has to be cautious, making use of those same defensive tactics; parrying your blows, countering back your own counterattacks, flanking you, and maybe even feinting so that you strike prematurely and get riposted. I know that’s a lot to ask of an AI, but some games have proved that it is possible to at least imitate this behavior. Then each fight would feel like a confrontation, and not a chore. 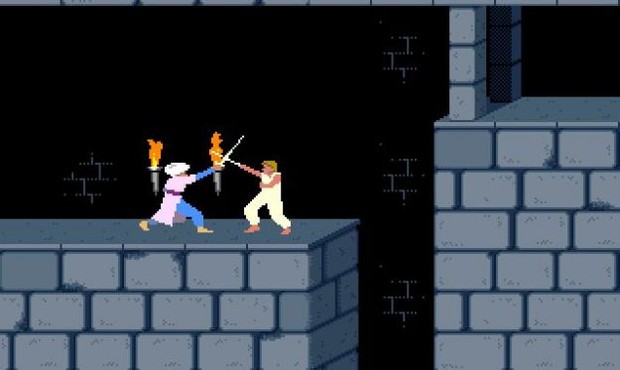 Level 1 of Prince of Persia. I’ve finally traversed through the first set of traps and I decide to go right at the intersection. A strange hooded figure blocks my path and, as soon as I approach, hits me with a long object, killing me off instantly. The image on my old, black-and-white TV is so blurry that at first I’m under the impression that I have been hit with a cane by some old woman.  Only later I realised that was actually a sword.
A few hours later I’m back here with a blade of my own – now we’re talking! Clank, clank… oh, that awful sound of taking damage – it still haunts me to this day. Clank, clank… and I’m down again. So it’s back to the level’s beginning – but sooner or later I will have my revenge!

And now, my fellow community members, I’d like to ask you, which games would you list as having the best swordfights? I’ve heard of Niddhogg but I’m still considering trying it out... Or maybe there are other games I haven’t heard of which would satisfy all of my capricious demands? :) Please, feel free to express your opinions!
Login to vote this up!