2:36 AM on 01.03.2014 (server time)    0
Despite JRPGs being a dime a dozen on handhelds, there's been a lot of buzz surrounding Bravely Default. After releasing in Japan in 2012, many gamers in the West petitoned Square-Enix to localize it. Despite some weird tweets on Bravely Default's Twitter page and some unconfirmed reports of the game being localized at GDC last year, Square remained quite, causing many gamers to wonder if were getting the game. We finally got our answer on an April Nintendo Direct, where not only was it announced that the West was getting Bravely Default, but that it was being published by Nintendo themselves. Even better, the game was coming out in 2013....in Europe. The States would have to wait until February 7, 2014 to get it's 3DS JRPG fix, but thankfully Nintendo of America realized that the wait would be unbearable for some people (me), so they realized the a demo of the game on the 3DS eShop earlier today. After playing it for a few hours, I was left asking myself one question: WHY ISN'T FEBRUARY YET?

One of the first things you'll notice the minute you boot up the demo (besides the amazing music playing on the Title Screen), is that the demo takes place in a town called Ancheim and the area surrounding it, which is supposedly exclusive to the demo. The four heroes (Tiz, Agnes, Ringabel, and Edea) have come to the town to at the request of its mayor, who needs the four heroes help with some problems that the townsfolk have been experiencing. This usually involves you talking to someone in town, killing certain monsters, and then giving them a certain number of a specific item that a monster drops (though the demo does emphasize that the final game is not setup like this). As you complete certain quests, you get specific items that you can transfer over to the main game when it comes out (more on that later). Other than the quests having to be done in a specific order (you can't go onto the next one until you complete the one you're already on), I absolutely love this setup. It strikes a perfect balance between familiarizing the player with the core concepts of the game (going on quests, battling, etc.), while at the same time setting it in area that is separate from the main game, thus keeping spoilers to a minimum. The area is big and diverse enough that you can explore and grind to your hearts content without feeling constricted. 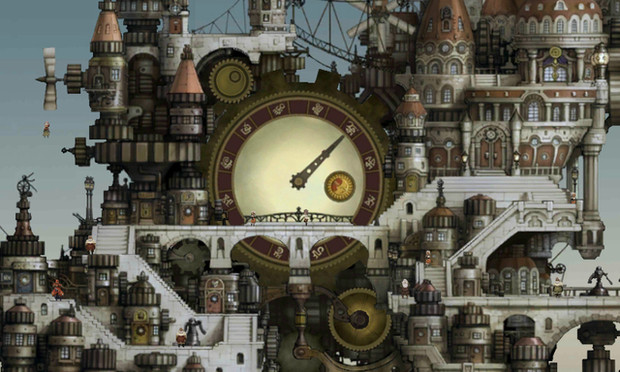 Earlier I said that you can transfer content from the demo into the main game. Whenever you complete certain tasks or reach certain milestones during the demo, you'll get a one of seven item packs that has specific items like Potions and Antidotes, which will then be transferred to the game when it comes out next month; how that's going to happen remains to be seen. In addition, the demo has StreetPass functionality, and works the same as it will work in the final game, in that you have people come to your village and help you rebuild it, after it was destroyed in an earthquake during the course of the main game. Both the item packs can be transferred from the demo to the main game. Unfortunately, you won't be able to transfer your character's levels (or their job levels), the items you buy and earn in the demo, or any of the abilities that you learn. I wasn't expecting that, but it should be noted. Also, every bit of dialog is silent, though in the final game, it'll be mostly voiced.

So overall, should you get the demo? Honestly, it really depends on how excited you are for Bravely Default. If you've been on the fence of getting the game, this demo isn't going to change your mind. However, people who have been excited for the game owe it to themselves to get this. It does everything a demo is supposed to do: it gives you a basic taste of what the final game will be like, and it gets you excited for the final product. It also gives players who are going to buy the full game an excellent incentive to play through the whole demo. While good demos don't necessary mean a good final game, if Bravely Default is as good as it's demo, we just might have another solid RPG to add to the 3DS's already solid library. Now, if you'll excuse me, my 3DS just finished charging, and I'm going back to playing some more Bravely Default.