Alright, now things are getting serious. 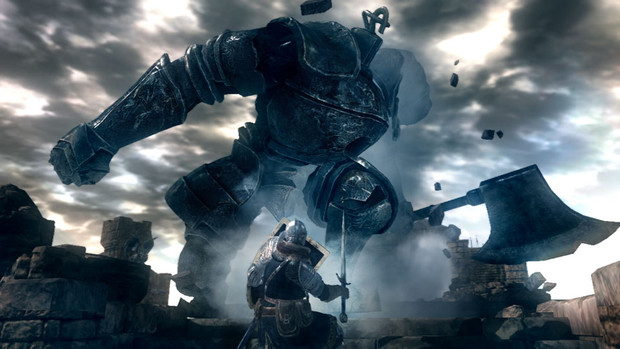 
Back in 2009, Atlus USA brought the PS3 exclusive Demon's Souls to North American shores because no one else really seemed to want to. The game was a dark fantasy themed hardcore Action RPG and no one, including Sony at the time, thought it would catch on. Even Atlus only printed a very small number of copies.

Then something happened. That limited run completly sold out. Atlus got more copies out. They sold too. Word of mouth got this game to become one of the biggest sleeper hits of this generation. It currently sits (according to VGCHARTZ, so YMMV) at 1.63 million copies sold, with about half of that being in US and Canada alone.

Then From Software stops dropping hints about "Project Dark" and later, this time partnered with Namco, drops this little bombshell at E3 2011

And , a few months later, Dark Souls is unleashed upon the world.
What can I say about this game that you all have probably not heard? This game is challenging, the world haunting and beautiful, the controls damn near perfect.

This game will teach you fear. Fear of the unknown.
Fear of death, and losing possibly hours of work

Fear of what may be hiding behind the next corner.

And yet, eventually, you master that fear. You learn from your mistakes. You overcome that challenge that's been holding you back for what feels like forever.

And then some asshole invades your game and murders you. C'est la vie.


Never has a game felt so intimidating, yet so fair. The game may start off looking daunting and unfair, but start figuring out how things work, never let your guard down and take things at a cautious pace and you'll be just fine.
Except for the Tomb of Giants. Screw that place

Here's to Dark Souls 2 being just as good, if not better.
#PersonalBlog
Login to vote this up!