The final Final Fantasy ranking to end them all. Maybe.

And that’s just the thing. Is it really that simple? I’ve wondered about that before. So for the past few weeks/months I’ve combed through different comment sections and forums where people have made their own rankings of what games in the series they think are the best, and what games they think are the worst. I put them all in a handy little Excel file (I have a boner for stats and rankings and such btw). In total, I’ve basically polled over 200 people, and here are the results: 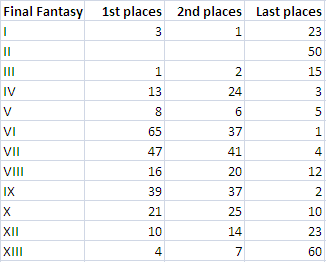 Just a few notes first: I only included rankings of people who had played and listed the majority of the games, at least 8 of them. Only games in the main series are in the results since that was what people mostly listed (it's worth mentioning that a fair number of people did put Final Fantasy Tactics as their favorite). No MMOs. Why? Again, not that many people listed them, and the gameplay is pretty different. We could've discussed whether or not the MMOs should have been included until the cow comes home, but let's just leave it for now. Also, I decided to include 2nd places to give a little more variety and perspective, and give the games that almost got 1st place but just didn’t quite make it some glory. If you wonder about what sites I've gotten these lists from, just google something like Final Fantasy ranking and set results for the last three years. That’s basically it, not much more complicated than that.

Now you can interpret these results as you will, but let me give you my conclusion.

VI, VII and IX, in that order, are the most popular. Highest amount of 1st and 2nd places, lowest amount of last places.

IV and V. Not that many 1st places, but not many last places either. These games usually ended up in the middle of people's lists, although IV ended up getting a lot of 2nd places.

And then there’s XIII. Few 1st and 2nd places, most last places.

And there you have it. It's not the most accurate polling in the world, but I do think it’s the best some random dude on the Internet can hope to achieve, and it gives a clear indication of what the most and least popular FF games are.

So let me talk a little about XIII. I didn’t go out of my way to find sites and communities who don’t like it. All the people where just random gamers who listed their favorite to least favorite FF games. They were just as likely to put XIII on top of their lists as to put it on the bottom.

Personally I can’t stand XIII, I will admit that, but I’m not saying that it’s wrong to like it. Definitely not. The game has a Metacritic rating of 83 on PS3 and 82 on 360. It has sold over 6 million copies. But if you were to judge its popularity among the rest of the main series, it doesn’t exactly rank that high, to put it lightly.

And now, I invite you to rank the games in the comment section, whether you’ve played just a few entries or all of them. Just remember to keep it civil and polite. I'll go first. And please include spin-offs if you want to.