Jimmy Hopkins from Bully is on GTA V! Really! 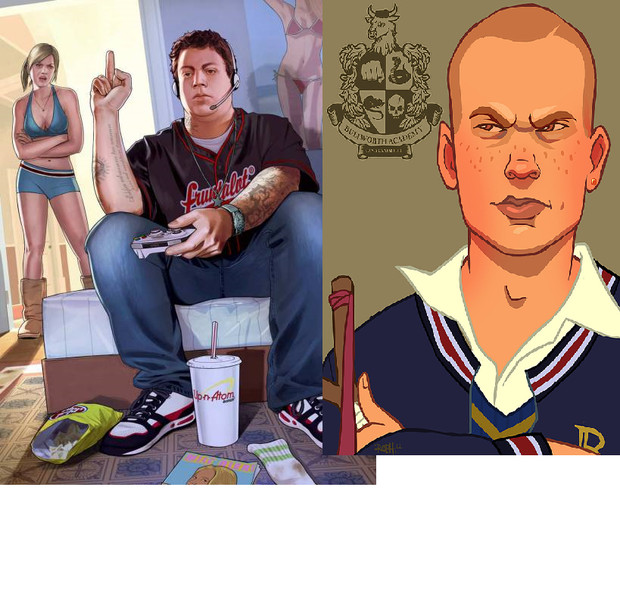 So, this just crossed my mind. Jimmy de Santa, Michael's lazy, idiotic son and Jimmy Hopkins, the badass kid from Bully are the same person. Not only they share a similar appearance overall, but it makes a lot of sense that Jimmy grown up from bully to be the idiot from GTAV.

First, remember that Michael and his wife doesn't have a happy marriage, so it is not much of a stretch that on one moment, they split as she found a more stable man to live with. She dropped Jimmy at the board school so she could have a honeymoon with her new love. Yes, Jimmy mention how many boyfriends she had, but remember, Michael's wife wasn't exactly faithful.

So, you may ask what happened with badass Jimmy. How he become a gullible, lazy asshole? First, Jimmy on Bully wasn't really that smart, he was manipulated a lot of times. This characteristic of naivety remains in older Jimmy. Second, the reality of a highschool is different from the streets, so a kid who is successful in the school environment trying to apply these rules on the outside, real world. Jimmy's school smarts doesn't translate in street smarts.

Third, fast food and weed. After Michael and his wife got back together, it is not a stretch to assume they just let him do whatever he wanted. Indulging in fast food killed his athletics, while weed affected his mind. So, after indulging himself on that, the cool Jimmy become lazy Jimmy in GTAV.

Well, those are my points. I would love this to be actually what Rockstar did, cause this would be an awesome plot twist. And also because I really want Bully 2.
Login to vote this up!