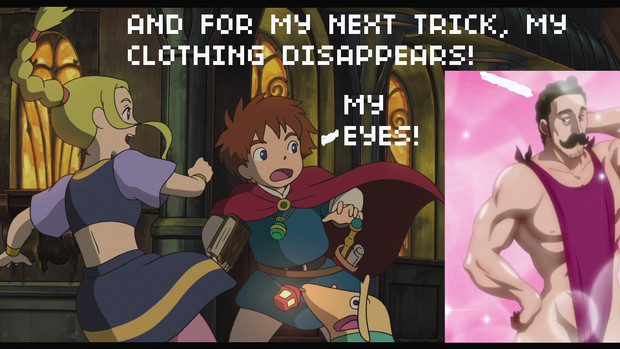 I doubt these factors will change Seymour’s mind about the aspects of the game that have made him leave it in favour of Persona 4, and I would respect that decision.  I have given reasons for his gripes, but these cannot excuse the game from its imperfections.  There are only two major issues I have with his blog;  firstly, the level of criticism put on Ni No Kuni by using the other particular game to point out the flaws is, in my opinion, a little over the top.  Maybe it is just me being sensitive, but Persona has the subjects, characters and narrative freedoms that would easily interest him without being held back by an audience he has outgrown.  Ni No Kuni never really had a chance of standing against P4 with more generic characters and situations that could only be presentable to a family.  He could have been looking for laughs, tearing into the game to make his blog sound entertaining.  However, I can’t help but feel he’s done the equivalent of attacking a Disney film because it doesn’t have the deep meaning, topics and research that a Christopher Nolan one has.

The second issue is his dismissal of the plot.  He hasn’t played the game all the way through and yet says that it is a ‘by-the-books-story’ about Oliver’s ‘quick fun…leads to trouble and he learns a lesson’.  It would be easy to encapsulate that if you played the first few hours, but after playing the game to the story‘s conclusion, there are a few twists in the tale that would easily damage Seymour’s assumption.

And where should you, the reader, stand?  If you have a lot of patience, love RPGs with a solid battle system and/or love Studio Ghibli anime, you’ll be fine with this.  But if you are looking to try something away from the norm, don’t want to have to deal with reams of text about things that might not interest you and have more experience with games to know what to do, it might be time to move along to something else with a bit more scope.  We all had to start with a particular game somewhere; maybe another possible Level-5/Ghibli game could garner a more interesting result and rectify those mistakes.  For now, I believe Ni No Kuni and Persona 4 exist in their own little grounds.
#General-Opinion/Editorial
Login to vote this up!