4:49 PM on 05.26.2013 (server time)    0
LOOK AT ME I WENT TO COMIC CON BLOO BLOO BLOO FUCK OFF. But anyway, I took Phil to London MCM (Comic Con for you non-UK folks basically)and so we went on our first adventure together, and here it is! Just a fore warning though, it could have been a lot better, I just couldn't be fucked at some points, because I was too busy enjoying myself. Sorreh Phil :( 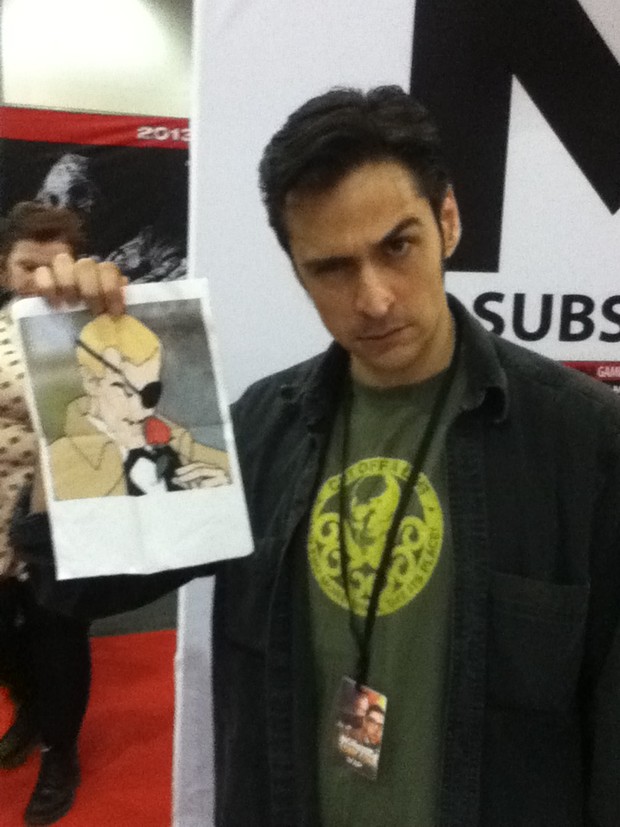 We even got to meet Mark Meer! MARK FRIGGIN MEER! I CAN'T EXPLAIN HOW AWESOME HE WAS AND HE'S JUST FUCKING AMAZING ARRRGGGGHHHHH-

One more note, Mark also wins the badge for being the only guy there who knew what Phil's avatar was! Anyone want to explain what the hell Harvey Birdman is, because it sounds fantastic :D

And there you go! Phil and I went to our first expo together! We played some great games, most notably Tekken Card Tournament, Rayman Legends, Deadpool, Remember Me, Project X Zone and the re-make of the classic arcade game Space Harrier 3D. Also, Dynasty Warriors 8 was like every Dynasty warrior ever. Tales of Xillia was nice, and so was Grid 2.  Some of the games though were pretty average. Deadpool wasn't particularly fantastic, and I wasn't too fond of Remember Me, but it still looked pretty early so it deserves the benefit of the doubt.

Four best games there:
-Lost Planet 3 - Had an amazing "The Thing" vibe to it
-Space Harrier 3D - Eshop 3DS game coming out, fantastic fun
-Tekken Card Tournament - Sweet free app that's highly addictive, has a soon to come real life card element to it
-Rayman Legends - If you liked Origins or Jungle Run, or love Rayman in general, you're going to love this

And that's it guys! I bought some fantastic comics, played some great games, and met a lot of fantastic people. Till next time guys!
#General-Opinion/Editorial
Login to vote this up!