4:50 AM on 05.15.2013 (server time)    0
Games by Austrian developers are a rare and delicate breed and yet there is some movement beneath that thick eggshell. I am from Austria (wisecrack) and I usually don't care. But when it comes to games the corneal on my thumbs flashes red-white-red (in a sickly unsettling fashion...ew, gross). Data Dealer, a browser game by a very very very small developer indeed is such an Austrian game and might prove to be an (if not the) Age of Wushu-killer.
I usually don't play browser-games (it's not that I hate them, they just don't interest me) and I know that Data Dealer won't be a game that I will invest 50+ hours in but I can't deny that I like the project. 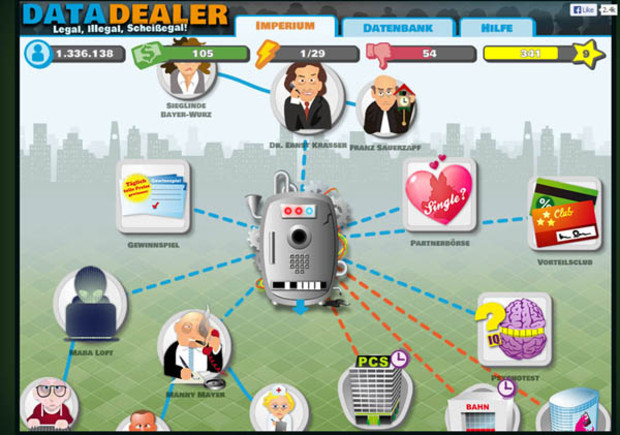 Data Dealer is mimicking smash hits like Farmville (never played it, I swear) or other Zynga-abominations. At its core it plays similar to those games (which I never played) - a constant struggle for the optimization of ressources and time - with a twist though: you deal with data. You are the anonymous behemoth who collects all of this precious bits of information floating around and you sell it to the corporate ringleaders. You do this by bribing your sources and organizing the usual internet-shenanigans like psycho-tests and sweepstakes.

I tried the demo-version and it's mostly moving things from A to B, which feels satisfying enough. Some meters to observe (like bribe-money, stolen profiles and such) and a lot to read and to compare. Actually I enjoyed the reading the most. It's evident that the developers really want to communicate their ideas about privacy and data safety to their audience. When I think about all those insane juveniles on facebook I wished for games like this one to be integral part of informatics-classes at schools.
It's an entertaining read as well, satire-heavy and a little silly from time to time. The fact that Data Dealer makes fun of quite a few public figures of Austrian society/politics might not translate too well if the developers release the English version eventually - beefcake-governers and stratosphere-suicide-commandos aside. Allusions to a former finance minister are going to be overlooked but I think an opportunistic puke is a staple which is intelligible globally. The Southparkesque art direction helps of course.

I believe I would have completely overlooked this one, if it wasn't for its socio-political aspiration. Data Dealer is a game that wants something. It wants you to be aware of your actions. It doesn't resort to pedagogical banalities but lets you switch sides and be an accomplice of evil deeds. I think that deserves a hug.

Ah ja, and it's all free and open source and fluffy and whatnot.

http://datadealer.com/english
Login to vote this up!