Musings on the Gameplay of Bioshock Infinite

9:02 AM on 04.06.2013 (server time)    0
This morning I realised something about Infinite that I think is actually a pretty big flaw, especially compared to the previous games of the series.

I was listening to the Gamestation podcast yesterday and they were talking about Infinite, and there was mention of how the gun variation in the game isn't very good. So I thought about it myself, and they're totally right. You have various generic machine guns and rifles, a couple of standard handguns, and an RPG launcher. The only gun that's slightly out of the ordinary is the heater, which I personally find unwieldy to use anyway. It's miles away from the stuff in previous games. Things like the chemical thrower from the original and the various different Big Daddy weapons in the second for example. Not only that, but you have the special ammo types as well. They don't just do damage differently to each other, but they behave differently as well. You have the electrocuting and exploding buck for the shotgun, the electric and freezing gel with the chemical thrower, the homing rockets and proximity mines for the rocket launcher, etc, etc. But in Infinite all the guns pretty much just do the same thing. Just shoot normal bullets or exploding things. Not very interesting. 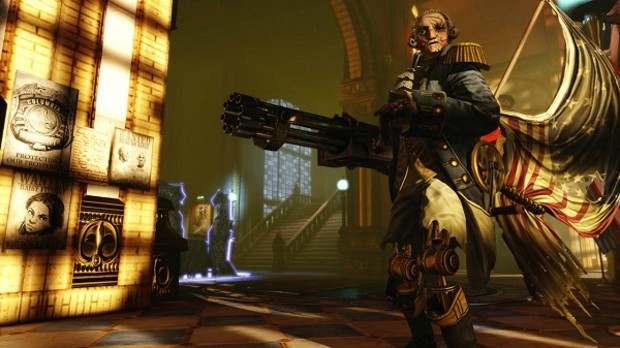 So this leads me to something else that was discussed on the aforementioned podcast. They said that the game didn't really deserve the review scores it got. While I tend to hold the position that nothing, or almost nothing, should ever get a 10/10 (nothing is perfect), I was kind of resistant to the idea that the game was overrated. But upon pondering this, I think it actually was. No matter how great a game does story and characters, and no matter how wonderful the setting is, when you have this many problems with the gameplay, there is no way that the game could be worth plenty of the scores it was given. Gameplay is king, and, as they saying goes, boring is worse than bad. Not that it was bad in the older games, but it was definitely a whole lot more interesting. Another thing that they brought up is that perhaps it got such great scores because reviewers were in a rush to write up their review, so they did it right after finishing the game. Thus they were doing so when the ending of the game was still fresh in their minds, and they were too excited over that to really take their time on giving a fair and holistic critique. I haven't finished the game, so I don't know if that's the case, but I think it reasonably could be.
Login to vote this up!