4:28 AM on 04.03.2013 (server time)    0
So I picked up a copy of Extermination a week or so ago, and was able to play through the game pretty quickly (in about four or fives hours), and that made me think about and then eventually do a pretty long write-up about Survival Horror essentials, but even though it inspired the piece Extermination only really got mentioned in passing. I liked the game though, so I thought I'd do a short write-up about how the game plays.

Extermination is a PS2 Survival Horror game that follows the story of a squad of marines who are sent to investigate a top-secret Antarctic research base when contact is lost with the facility; unbeknownst to them the scientists at the facility have been working on reviving a prehistoric bacteria frozen in an alien artifact for thousands of years. This bacteria is unleashed on the facility, revealing itself to be a pseudo-intelligent lifeforce capable of infecting and mutating living creatures and turning them into monsters, driven only by the urge to in-turn infect others. 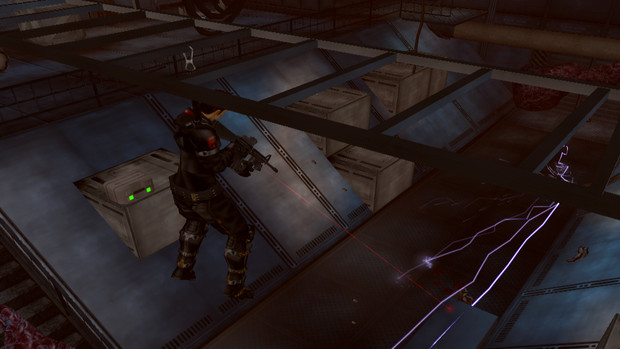 I quite like B-movies though so I liked the plot generally, but it is admittedly very dumb at times. I don't think it helps very much how wooden and forced the dialogue sounds. And when I say wooden I do emphatically mean wooden, we're talking 80's anime/D-list movie level performances. For the most part it's ok, but like with a lot of not very well dubbed/translated foreign games I get the sense the original Japanese version probably made more sense and affected the player more (I could be wrong, the plot is still very B-movie, even ignoring the voice acting).

Overall I doubt Extermination is the sort of game that'd impress anybody whose not a fan of the genre but for a Survival Horror fan like myself I was pleasantly surprised by my experience with the game. Kinda glad I got it for next to nothing though!

:D
Login to vote this up!