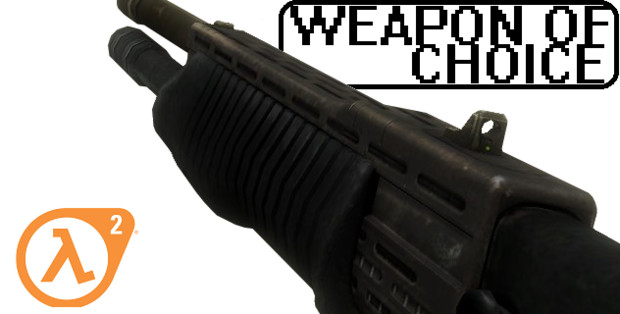 Video-games are too obsessed with weaponry. I understand guns give that 'instant feedback' which is utterly crucial to tactile experiences but interactivity for a good amount of time has always resided in the tunnel vision of the blood-soaked industry. With that in mind I'd like to explore some choice examples of weapons that work beyond shooting people in the face. If this industry is going to build itself around weapons then the least we can do is find elements that are at the very least interesting or shape an experience in unique ways.

Half-Life 2 is an indisputable modern classic. I've written on it before from how it cursed me for years and how I do believe it's the most 'competent' first-person shooter ever made. I still replay it every once in a while just to capture that very unique feel. One of the main criticisms lobbied at Half-Life in general is the lacking of mechanical identical. BioShock has its plasmids, Fallout 3 has its V.A.T.S and even Call of Duty has a very 'modern' approach to its arsenal. Half-Life, as a franchise, has carbines and alien guns and other apparatuses that really don't give it a 'distinct' identity when it comes to its mechanics. When I think of playing Half-Life 2 I instantly think of playing the game but not how the game plays. This is why the shotgun is so crucial to Half-Life 2, more than the gravity gun in my opinion. It truly is more unique than a simple physics firing wotsit.

The shotgun (full name: Combine SPAS-12) in Half-Life 2 is given to you by Father Grigori in the Ravenholm section of the game and it, on the surface, functions like any other video-game shotgun. Push one button to shoot. The twist comes in its alternate fire that spews out two shots instead of one. This can be used to instantly ice certain fools or blow up barrels. One pellet is enough for certain enemies, such as barnacles, but others take more than two. It really depends on what distance you're working at. During boss battles and other heavy sequences you start to realize there's an intricate system to the shotgun. It has its own economy.

The economy of the shotgun is as follows: the chamber can hold up to six pellets at the time. This means there's a need to conserve and also add up, within seconds, the root value of what exactly your next button press results in. This table might help:

What you're constantly having to weigh up is how to maximize the pellets in your shotgun at any given moment. The shotgun has an economy within itself that really separates it from a lot of the weapons in the game. The sub-machine gun, pistol and magnum etc. don't carry the same 'power' as the shotgun. The magnum arguably has the closest economy to the shotgun, and it too usually kills all enemy types in one button press (one bullet), but it doesn't have an alternate fire like the shotgun does.

Now obviously I haven't considered the nature of the 'reload' and this effect drastically changes the internal economy. Having six shots gives you more options than having five for instance but being able to reload quickly gives the shotgun a unique quality in Half-Life 2 thanks to its alternate fire. Let's say you're fighting two big enemy types in the game and each takes around two shots to disperse but you're only carrying three shots in the chamber. This mean you can weaken them both with single shots and eventually killing at least one of them, or you can alternate fire and single shot another to at least take one away. With the added 'reload' there's now a multiple of possibilities and a layer of urgency thanks to this internal economy. Do you reload one more pellet just to alternate fire both enemies and vanquish them? Do you alternate fire and rush to cover to reload? Do you instantly rush to cover? You can interrupt reloading too which mixes everything up further. This entire system that orbits the shotgun is further deepened when you consider the various contexts that Half-Life 2 can put you in. Under water, open-spaces and other environments can all add or subtract urgency. Urgency can further be molded by manipulating resources in the environment or by the player his/herself; imagine having low-health in a room full of health items versus having low-health in a room without health items. Both scenarios play out drastically differently to one another.

The value of the shotgun I'm writing about here does seem somewhat 'too heavy', but that's largely because a lot of this design is sub-conscious. All of those 'ripple' effects such as ammo supply, the environment, health items, enemy types and others are all entangled with the shotgun's internal system. The internal and the external marry to bring about a gameplay experience aka. 'a firefight'.

Obviously the shotgun isn't your exclusive choice in Half-Life 2. You usually want to minimize input while maximizing output; using the least amount of ammo possible, conserving as much health as possible etc. The shogun's economy enriches this gameplay equation and its aesthetics are the cherry sweetener. The 'feel' of the weapon is felt with every reload, every pump and every shot/alternate shot. The weight is felt in both the recoil and in the second delays between reloads and shots.

The shotgun isn't just engineered with a rather simple but intricate economy but also designed to be pleasing to both the ears and hands. Valve really do nail the mathematical and artistic principles of their weapons and, for me at least, the shotgun is my weapon of choice.

Next week - BioShock's Wrench
Login to vote this up!