It is a late intro

2:45 PM on 02.04.2013 (server time)    0
I am so incredibly late for this, but the following lines are going to be a kind of introduction. I feel attached enough for this now. The process of writing this down was actually a little bit nauseating since I had to notice a certain degree of obsession in my life.
Oh dear.


So, videogames.
I grew up in a kind of pedagogical black hole, with forces tugging at me from different directions: with my father being rather indifferent to the perils of popular culture (exposing my juvenile mind to classic movie monsters and fascinating comics stashed away in the darkest corners of the bookshelf) I developed a rather distinctive taste for the morbid. On the other hand my somewhat overprotective mother tried to shelter me from Masters of the Universe and plastic guns. Any depiction of violence was a big taboo. Especially videogames were absolutely out of the question.
So I developed an obsession about comics early on, buying many hundreds of incredibly cheap pulp-magazines popular at that time. Gespenster Geschichten ("Ghost Stories") were equally cheesy as they were extremely awesome.

Everything on paper, everything written was not considered to be too suspicious, I hid my treasures anyway. Just in case. Today I have a large collection of movies and graphic novels.
Most of them deal with sex or violence. Or both. 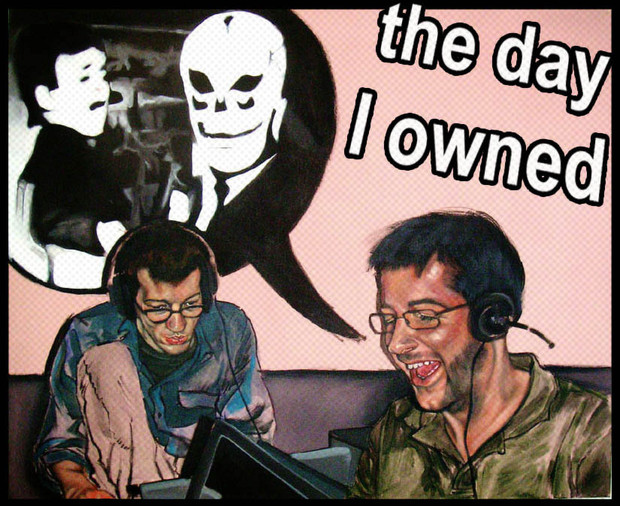 (academic dispute at its best; please observe: a player of Urban Terror, on the left)


The way I see it, every aspect of my being seems to be deeply connected to videogames.
That is frightening.

but now I'm here and all is good. thank you very much
Login to vote this up!