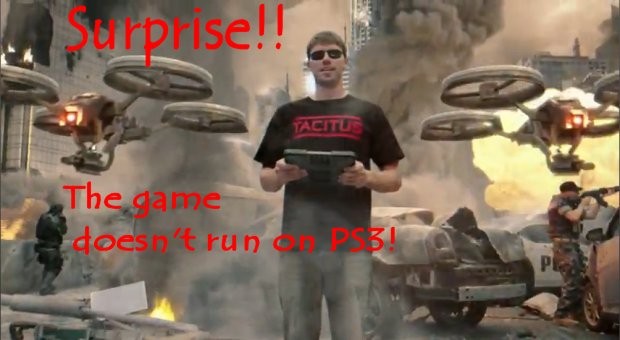 I don't understand how Activision can produce previous Call of Duty games that eventually worked fine on the PS3, and then fuck up the current game so badly. They're using the same old tired game engine they've been using since Modern Warfare, so it seems they should have been able to manage the basics of people getting into the game and playing the game. Some third party PS3 games do work fine... I had absolutely no issues with Capcom's Dragon's Dogma and it seems almost entirely random as to which games will have PS3 issues and which won't .... but I guess if it's a huge AAA game with millions of dollars invested into it (like COD or Skyrim), the chances of it not working on the PS3 seem to increase. :(

Anyway, I guess I'll de-stress by getting some exercise with Kinect Rhythm Party and by trying out some of the PSPlus games I've acquired. I tried out Just Cause 2, and it's a goofy fun game if I ignore the quests and just explore the island while blowing shit up and playing with the cars, boats and helicopters! There are also a bunch of other games (Warhammer, Payday, RE5) that I haven't even tried yet.

Ah well... at least I feel a little better after venting about my recent gaming frustrations! :)

... and hell, maybe I'll just load up Modern Warfare 3 and see if people are still playing.
Login to vote this up!