The Halo 4 sexist banning threat has no balls. 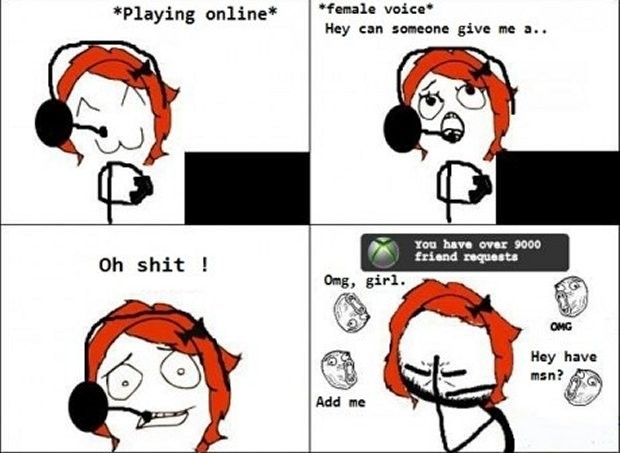 If the criteria is verbal, what's to prevent women from grouping up and lying about one of the group-member's ex-boyfriend? Claiming harassment in order to get the person permanently banned or at least temporarily banned while the complaints are investigated? If people don't think that women can be vicious... then apparently they've never been divorced.

The "sexist language" threat of a permanent ban has no balls when Microsoft and 343 don't spell out EXACTLY the actions or words that will get players banned for life. What they have done is either an empty threat, or worse, it will be a threat applied with bias - moderators will use their "personal judgment" regarding who gets banned for life and who doesn't.

Vicious harassment exists in gaming. It's not just sexist harassment aimed at deterring women from playing, it's also racist and homophobic harassment. There is harassment of younger players who's voices still reflect their youth. There is harassment of well... anybody and everybody. There are answers though and the answer is NOT some poorly thought out reactionary plan to specifically target sexual harassment of women in gaming. A more effective answer is to give players the agency to easily institute a voice ban. When a player is muted by two other players in a game, they go on auto-mute. They are simply and effectively informed that they have been muted. Anyone who wants to speak with this player must actually go to the trouble of un-muting them. If a player is auto-muted in say 5 games - then they are perma-muted. Again, anyone who wants to listen to this player or speak with this player would then have to go to the trouble of actually un-muting them in order to communicate with them. This is a clear and easy answer to harassment of all kinds, including that idiot that feels the need to blast rap music at very high volumes through their mic in every game (and if it's one of those "gangsta bitch" misogynistic rap songs - is that considered sexual harassment of women?). If the harassment is via messaging, then have an auto-ban on the player's ability to send messages after "X" number of complaints. If they want the ban lifted, they would have to exonerate themselves.

The thing is that there are answers. The answer though is not a narrow minded focus on sexism, while ignoring other forms of harassment. It's not perma-banning people from a game based on some nebulous criteria. Instead it's giving players the agency to better control who they play with. Microsoft already has a good start with their ability to use the party chat system. They even have gamer "zones" such as Recreation, Family, Pro and Underground. These zones don't actually seem to have any purpose or effect, so why don't games create their own Zones. In a game with the population base of something like Halo 4, it should be easily possible to at least divide players into "Family" and "Underground". Any one found to be swearing and abusing the "Family" rating could be automatically re-classified permanently into "Underground" if enough players mark this gamer via an in-game system.

Answers... yes, they are there. Perma-banning for sexism in Halo 4 - not an answer. Instead, I'm starting to feel used and dirty... that "banning sexism" is simply a marketing tool aimed at women to encourage them to play Halo 4, aimed at the press to generate publicity, and aimed at the Sarkeesianesque sympathizers who buy into the whole issue with their white knight dollars. The irony is that in banning players for making "sexist" comments against women - they themselves are acting in a sexist manner by treating males and females different. By singling out "sexism" instead of harassment, they are playing the big ole gender card and they are doing nothing more than exacerbating the existing male vs female negativity.

Halo 4.... look for ways to battle harassment, but please get off the sexism sympathy train. It's quickly running out of steam. and I'm getting damn tired of being used as fuel. The problem isn't sexism or harassment against women... it's just plain harassment against anyone!
Login to vote this up!