12:47 PM on 10.12.2012 (server time)    0
Hello everyone. How have you been? Lots of new and exciting things going on around here. I'd like to share some thoughts with you today. Its some random things. Just whatever I can pull out of the attic crawlspace I call my mind. As I write this, in my head, the words sound like Bob Ross' soothing voice. Let me test something:

I'm so glad its Friday. Some tea would be lovely right now. Bitch, put that knife down or I'll pull your ovaries out with a pick axe.

Heh, yeah, Bob Ross voice makes everything sound ok. I will try to make this both substantial and clever. Thank you for taking this journey with me. 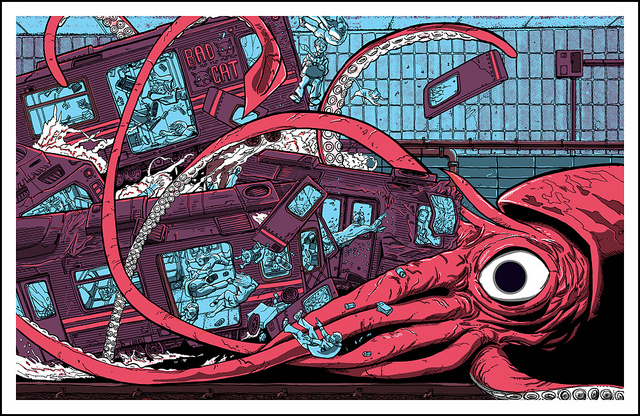 -Borderlands 2 is a lot of fun. I am enjoying the Gunzerker quite a bit, minus his silly faux hawk. I like crazy sci-fi futures where everyone is either bald or has Gary Oldman's hair cut from The Fifth Element. I hope that as technology becomes more advanced in the future, we can move away from poor haircuts. And cure AIDS. And invent a corn dog that stays crispy on the outside the whole time and doesn't turn into a soggy cock half way through.

-Every once in a while I get this longing to play an RPG. I think its a comfort thing, like chicken soup or masturbation. RPG's have always been a place of solace for me though as of late I've had trouble finding many that butter my toast. So I search Gamefly like I'm trolling for mall pussy and I find this game. I don't know anything about the Magna Carta series but figure, hey, why not? 38-ish hours later I arrive at the final area before the final boss and promptly eject the disc and send it back to Gamefly.

The game did that thing that RPG's do where you get to the last area and then you find out you have to go to three different areas and solve three different puzzles to unlock the grand door to continue the game. I hate that shit with a passion. I play as a character who can summon a lightning dragon that literally tears the sky in half. Why do I have to go trod through these boring, pointless puzzles to open a door? Here's an idea, take that sword that weighs roughly the same as a short bus full to capacity and knock that goddamn door down. It would save everyone time. And while you're at it, during the bad guy's "The world is a dream which must be destroyed in order to revive the dark peace of my soul's desire" speech, go ahead and chop his head off. Before s/he summons and devours God to become Ultima Deus or whatever, just walk up and turn him/her into a fine red mist with your 19-foot long sword shaped like a canoe designed by Salvador Dali.

I think I had more patience as a younger man when it came to puzzles like that. Now, I want to enjoy the story and journey but fuck you and your silly puzzles. I watched the ending on youtube then tea bagged the disc before sending it back. The end.

-Well, that was a bit of a rant. Hmmm, oh! I've really been into the Walking Dead episodic games lately. Have played and beat the first two and just really getting into them. I read the comics (though sparingly as its rather soul crushing) and tried the tv show but got bored by it. For some reason, though, these games are just really fucking doing it for me. I like how you have to make some difficult choices and there are some very jarring scenes that pop out of nowhere. Though sometimes the two choices the game gives you aren't what I would do at all and I feel kinda stuck making a choice and am pulled from the experience rather than having it be this organic, stressful experience that I would like it to be. So yeah, if you have heard of the game but haven't tried it out yet or are on the fence about it, consider this life telling you to give it a shot.

-A dream of mine came true recently. No, friends, I did not get that Lisa Frank full back tattoo.....yet. Marvel vs Capcom: Origins came out! For years now, I have wished to reclaim the sweaty, pig rut awkwardness that was my youth by having the first (and far fucking superior) Marvel vs Capcom game released in a format I could play along with my friends online. The gods heard my pleas and released it bundled with the old Marvel Super Heroes fighting game. I spent many moons killing time in the local Wal-mart food area playing Marvel Super Heroes waiting for my mom to finish buying stuff and things so I have plenty of warm fuzzies for it. But Marvel vs Capcom....sigh. It was my first. Sweet and soft. It taught me things. So that was a pretty good moment in my waking world.

-I have Resident Evil 6 sitting at home still in the Gamefly envelope. I'm scared to try it. It almost feels like pulling off a band aid to see what all the itching underneath is about. I'll give it a shot though, and while my mind is open to the experience, per say, I will try to find some digital magic while I'm axe kicking Puerto Rican eel zombies. From the videos I've watched, the action bits look neat. Something about motor bikes ramping across roof tops and what appears to be a tyrant with a crazy cenobite hell hook arm is appealing on a basic level for me.

-Here are a few quick hits of things I have liked lately and are worth checking out:

-Kill List: If you like slow burn horror movies and enjoyed the Wicker Man then you will adore this.


-Dredd: Its essentially The Raid set in a sci-fi world. A great movie that didn't get enough love in the theater. Does justice to the character. Worth watching even if you aren't familiar with Dredd.

-The Mountain Goats are one of my favorite bands and the new album is called Transcendental Youth and it just came out. This song is called Amy aka Spent Gladiator 1 and it makes my heart fill to bursting.

-And lastly, I give you the full DragonStrike video. For those of you old enough to remember, prepare for a nostalgia bomb of great magnitude. For those of you who don't know, Dragon strike was a fantasy board game where you had figures on a grid board and searched for treasure and fought monsters. What made DragonStrike unique was that it came with a VHS tape that explained a bit about the game and had actors playing out an adventure with lovely special effects and monsters and the whole bit. Pay close attention to the host's voice as he commands you to take your panties off and also the scorpion man later on whose face is the physical embodiment of rape for me. Enjoy.

Well, that's it for now. Yall have a lovely Friday and a nice weekend.