2:47 PM on 08.18.2012 (server time)    0
NOTE: What better way to get excited for PAX 2012, then to see all the sweet kickass swag and stuff you could have gotten if you went to PAX 2011. So, yet again, this is my haul from last year's PAX! Still significantly behind, but I'm catching up . . . kinda! >_< Hahaha! Also, I'm too lazy to change any of the "at the time" text I wrote, so . . . deal with it! =D That said, if you're reading this NIERO (or anyone else who does the programming on the site), are we ever going to get the MULTI-PICTURE UPLOADING that was from Destructoid 2.0? I forgot how much of a pain in the ass it is to upload pictures one by one. -_-' Had to upload 83 pictures one by one this time. Took close to an hour and a half! Also, I responded to almost everyone who commented on my last blog, you can respond here please.

Dag yo! So, way back at the beginning of September 2011, I would’ve expected the Cblogs to have a lot more PAX 2011 blogs than what materialized. With that said (and the timing of the writing of this blog, end of January 2012), you may or may not have already seen my blog about PAX 2011, or will see it relatively soon . . . I hope, hahaha! Still, for those of you who unfortunately couldn’t make it out to Seattle for a raucous and fun filled time, here is a A Compulsive Collector’s Haul showcasing all the super sweet swag and games that can be found during the festivities! In typical fashion, I went t-shirt whoring, poster whoring, “rare” swag whoring, and buying most of Pink Gorilla’s rare and valuable games, along with spending them dolla dolla billz y’all, at the ever so great and amazing guys manning the Fangamer booth! So, enough chitchat, one with the show! 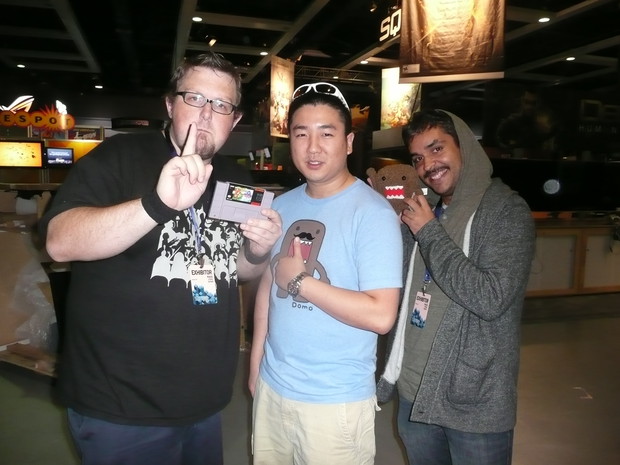 This is a picture of me with Rocco and Derrick from Mega 64, along with a copy of Super Mario World 2: Yoshi's Island that Rocco wanted from my collection of doubles! =D

So, that's another post, we'll see when I can get the next one up mates! Thanks again! ^_^
Login to vote this up!