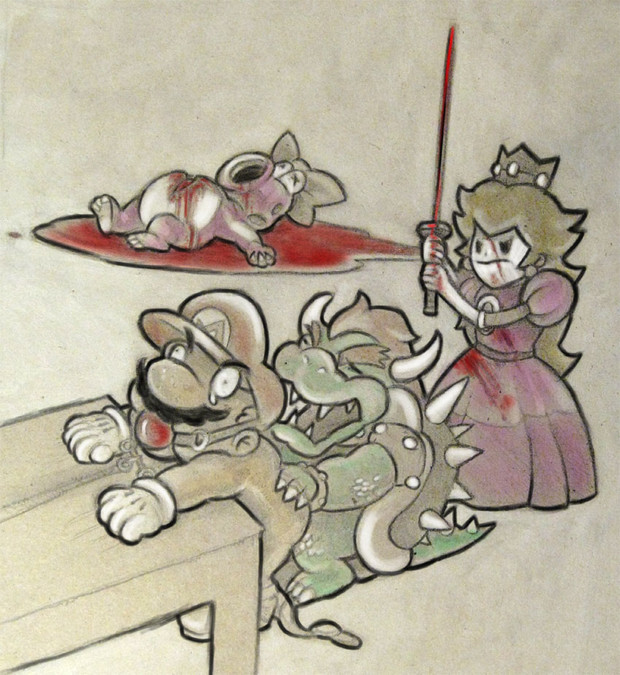 i always thought that it actually was Mario that Bowser was after, using Princess Peach as a mere bait.

Mario is a fat plumber with no real perspective, living together with his gay brother (both in denial).
Peach is supreme ruler of a land of gaudy-dressed eunuchs (the Toads).

There is not too much that these two have in common - the basis of their relationship: she regularly lets herself being kidnapped by Bowser, forcing Mario to come to the rescue.
Since there is no real intensity in Mario's feelings towards the Princess, i assume these abductions cause some cheap thrills for both of them:
Peach can enjoy the illusion of being loved affectionately.
Mario feels like actually being needed and finally has a chance to act in way corresponding to his (assumed) ideal of masculinity
Bowser wants Mario to invade his every castle and to climb his flagpoles
A twisted triangle relationship if ever there was one.

For once, I want Peach to take over and to openly act as the driving force.
(Super Princess Peach does not count)
Behind the sticky veil of bright colors and smiley-faces the Super Mario World is a brutal and sinister world (at least for me it is) and that is also what I wanted to depict.

(ps:being a royal, Peach must have been trained extensively in diverse forms of swordplay. So she will use a katana and not her friggin umbrella [see: Super Princess Peach])
#ShareonCommunityBlogs
Login to vote this up!