10:19 AM on 06.30.2012 (server time)    0
Who Are You Again?
In case you've been wondering where I've been (I'm sure you haven't) but just in case, I've been on vacation backpacking in New Mexico for the last 14 days. Yet now that I am back I do happen to have a new experience, and yes it does relate to videogames.
(Also pardon me, my fingers are quite rusty)

*Protip: If you prefer bite-sized reading, scroll down to the text block

The Actual Article
The game in question is one which oddly I've seen played quite a lot yet hadn't ever considered investigating very deep, the game in question is Infinity Blade and Infinity Blade II. Not being a purveyor of cellphone gaming, it came as a surprise when I saw my compadres on our ride back playing this game, I asked them what it was and they let me get hooked up with it, I liked it.

It's a rather simple game but it impressed me for both the medium it runs on and for how well it manages to pull it off, I was familiar with the Unreal Citadel Demo but I had never realized that it had existed to a certain degree far before it became public. Infinity Blade is rather entertaining but it really isn't the gameplay that attracted me entirely but the story which seems to be almost danced about tauntingly in the actual game.

The premise is (not to spoil anything of the second) you start out the game in bloodlines as the first of a line, you eventually meet "The God King" who well, will kill you. When you die you are technically reborn with all your old gear and your son comes to avenge you. 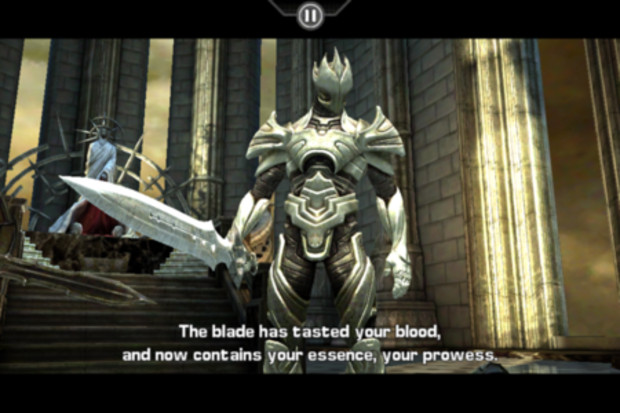 Your death will challenge you, and change you
What if you are defeated and the enemies get stronger and adapt to how you played, they take on your skills and in doing so, there is also a history written of what happened from your death, where it happened, why it happened, how did it change what occurred in the game world. Imagine a Skyrim where whenever you died, the NPC's personalitys and behaviors, even the very world will shift perspectives of sorts, it changes. It will be hard to balance out, but It's something I feel is unexplored, what happens when dying does have a permanent effect on the game but dying advances the story, writes the story, creates a story, it's still complex and for all due regards both my hands and my mind are still rusty, but I'll just leave this thought here.

I've rarely heard of a game where for all due regards the main character can, in fact, die and the show will go on. It's gruesome but imagine if link died in Legend of Zelda, nobody knows that he had a son or a descendant, a student, how would the world change, and what if the descendant died. It seems to feel like dark souls also tried to touch on this. It's complicated but I feel it's hopeful and maybe we'll see a game that tries bringing user motivated generation, to a new degree.
Login to vote this up!