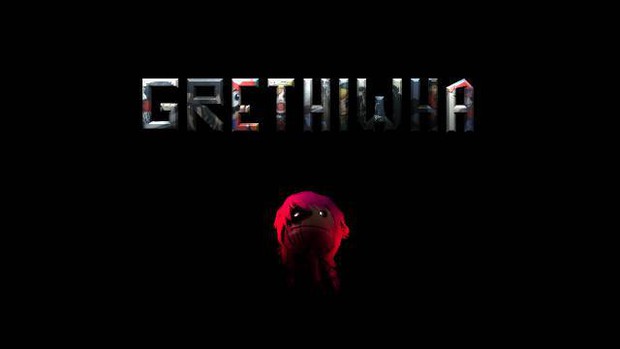 I would like to tell you about a level I made in LittleBigPlanet a couple of years ago. It was not very popular; only a couple dozen people on the whole wide Internet played it, but I like it very much. In playing it again recently, I was struck first by how much I'd forgotten of it, and second by how much the meanings I had intended with it came flooding back and how much sense they still made to me.

Since this is not Eraserhead and I am not David Lynch and I am not cool enough to not explain my art (there is no one to not explain it to), I want to explain what I did with this level. I do this partly just so I myself don't ever totally forget, but also I think it might be interesting – perhaps there is no better way to express the whole of what makes LittleBigPlanet special than by narrowly focusing on the experience of a single, not-especially-talented creator and one level. 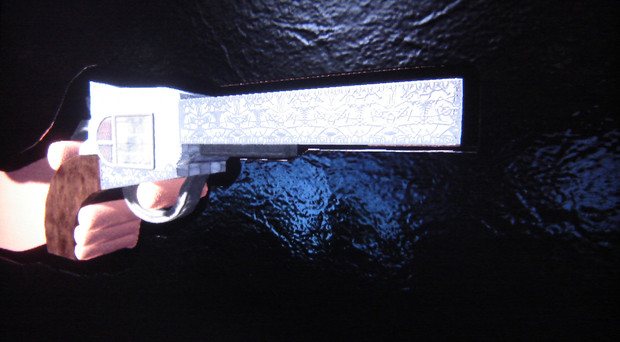 To start off, I must mention that the level is called The Finale. It is the 13th and final level I made. Of my other levels, there are maybe 3 or 4 other decent ones including Aww Pee Gee, a Zelda-style adventure in which you are forced to complete menial tasks for the townsfolk before you're allowed to actually start your adventure, and Escape to the Space-Piranha's Lair – my response to the addition of the paint-gun to the game – a co-op level in which one person with a jetpack carries another person with a 'Paintinator' (so it becomes a space-shooter where one person controls the movement and another the aiming and firing), and you go around shooting space-fish. (At the end of the level, if you do everything right, there is a line I wrote where a man reveals that "Those weren't ordinary space-fish! They were robot-space-fish!" Later a Futurama episode was released with the suspiciously similar line "That's no ordinary space-whale! It's a four-dimensional space-whale!" Now, I'm not saying that the writer of Futurama is one of the, like, dozen or so people in the world that completed my level with the good ending, and then stole my joke, but it stands to reason. :P) There is another level I made which I really like called The Ultimate Test – the object of which is to achieve a high score by standing on a button that makes farting noises for as long a time as you can stand to. Anyway, I never did end up making any levels for LittleBigPlanet 2. 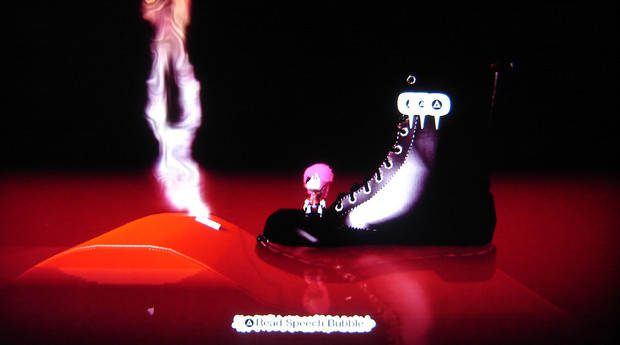 The Finale was to be my response to the addition of water to the game. My original idea was that you would play as a bullet, who was shot into someone's head and you had to make your way through the human body, swimming through blood, and eventually escape out of the rectum or something. Yeah. It was to be called Little Bullet. The finished level is quite different. Somehow it ended up being an expression of everything I was feeling at the time with regards to the game, a perfect expression that probably only I ever at all understood.

The level begins with the firing of a gun, and then Sackboy emerges from a bullet inside someone's brain, as in Little Bullet. A boot tells you what happened – that you were shot out of "his" (the boot's?) gun, and into this fella's head. I built this entire sequence twice. I remember well it was the 'Leerdammer' update that changed how profiles are saved in LittleBigPlanet and consequently fucked up my profile. I spent many hours getting this gun-firing sequence to work and then I logged in one day and my LBP profile was corrupted. I lost everything since the update, including the entirety of my work on this level. It wasn't until months later that I remade the sequence and completed the level – backing up my profile regularly, and regularly losing a day's progress from having my profile inexplicably corrupt again. 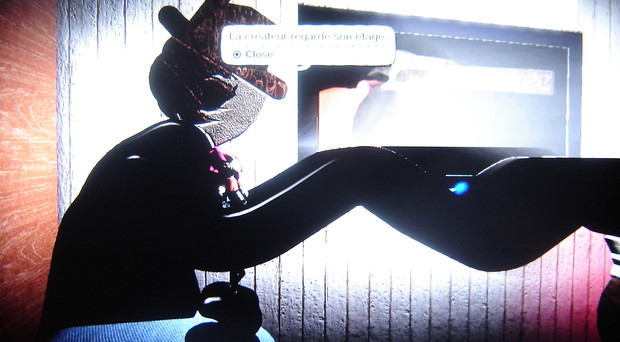 Anyway, in the original attempt I had a silhouette of a man's face represent the killer, who would guide you through the level. This time it was a talking boot. But you weren't there for long. There are a couple simple challenges with you swimming in blood, but then suddenly you go from being in a dude's heart to in a room with a man looking at the level you're playing on a television screen. The man is 'the creator' (in French for some reason), and he's very loosely and abstractly modeled after me. He ponders why this level is so violent. I wondered the same thing myself. It is LittleBigPlanet after all, and presumably children would play my level.

Then you're rocketed through a whole bunch of references to my older levels, including an actual rocket ship that was a really crappy and unreliable element of one of my very first levels – which I made work for this level! – as well as the characters from my Space-Piranha level who are 'space-fishing' from the mountains. The creator shows up again and remarks that his older levels were so nice and now, he says as you run by every character from every level that I made on fire, violence. One of the flaming characters says, "My profile keeps getting corrupted!" Another, "I can't get the last trophy because nobody hearts me as a creator!" That's another legitimate frustration I had with the game. 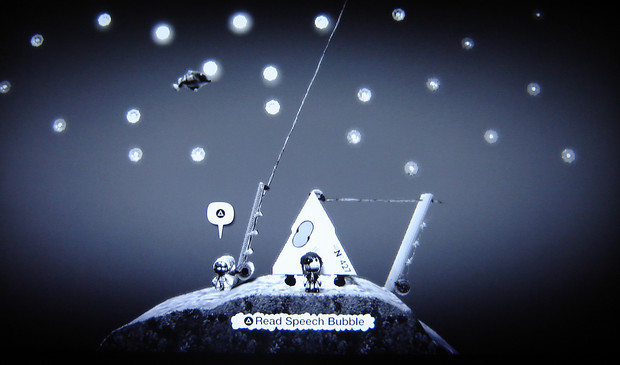 This was possibly my very favourite game on the Playstation and it's silly but I really wanted the platinum trophy. I earned every other trophy in the game except for the one where your levels must be 'hearted' by 50 people, and you as a creator must be 'hearted' by 30 people. I got over 200 hearts on my levels but I couldn't get the necessary creator hearts to get that last trophy. There wasn't really anything I could do about this, short of sacrificing my dignity (and the respect of the LBP community) by begging for hearts. I still only have 25. These types of frustrations, it is implied, led to the darker content of this level.

Then someone says "no more" to the violence and a wave of water comes and puts out the fire on all the characters and suddenly they are dancing and then you go and exclaim "I need a fresh start!" and you jump off a cliff and land in hell and then after a bit of a struggle you get on a cloud and ride it up into the sky until in a blinding white light you are told "See you in LittleBigPlanet 2!" and it is the end. I guess I was expressing the joy and love I still felt for this game, and my excitement for the sequel, and with it hopefully my chance to forget about my frustrations with LBP1. But before you get to the white light, there is something else, possibly my favourite part of the whole level – which nobody has ever commented on. You are presented with this image: 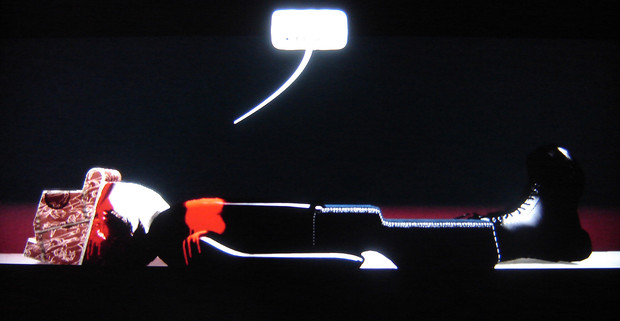 If you can't figure it out after all this, that's 'the creator' revealed to be both the victim and the perpetrator of the gunshot at the beginning of the level. He has the shot in the brain, as well as blood on his chest where Sackboy burst out of his heart. He is wearing the boot that represents the killer. The implication is I shot myself. But it is not I as in I. It is the creator part of me that I have killed. After this level I would not make another and I knew it. I had hoped that the creator in me would be revived by the arrival of LittleBigPlanet 2, but that did not happen. My profile still got corrupted occasionally in 2. I had enormous difficulty connecting to friends online even though I had no trouble in LBP1. Frustrations still abound. My interest had waned. The creator in me is still dead.

And it's a shame too, because in revisiting my LBP levels, I don't think I've ever had a greater medium for creative expression. I don't have the means to make movies or my own games, nor can I really draw, and LittleBigPlanet provided a means to make an experience and share it that is probably better than anything else I've made, and it's an experience that completely came out of me, and my imagination.

When I play The Finale, I can remember everything I was feeling at the time when I made it, and whether or not anyone ever appreciates what I was trying to do with it, it's very personally meaningful to me, as are most of my levels. And with millions of levels published around the world, there are surely tons of other people with their own levels who feel something similar. That's what makes LBP more than just a game.

I made friends on LittleBigPlanet. Good friends. Later, three of us all played Skyrim together, talking to each other via the Playstation text chatroom. One of them had to leave us forever, to sort his life out. We played LBP with him one last time. One of the levels he made was a sort of sentimental short scene about how he'd miss hanging out with his buddies in LBP – except then we were all going to play LBP2! I had forgotten all about that level, but it had an all-new poignancy when played in this new context. It nearly brought a tear to my eye. 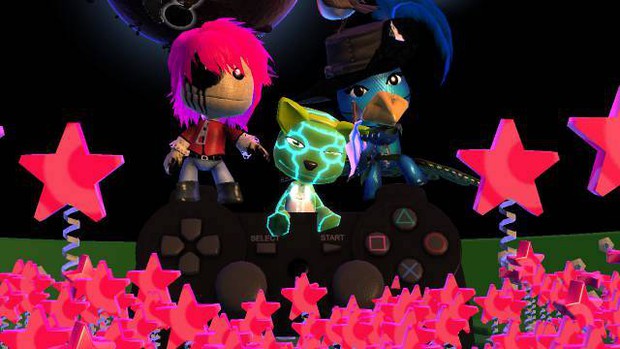 How to sum it up? LittleBigPlanet was more than just a game. It's a medium for creative expression, communication, and personally meaningful experiences. For this I can forgive it's flaws. I hope to return to some future instalment of this franchise in a truly meaningful way some day.