3DS eShop censorship? On region-locking within a region

But not only that! I had heard that us here in Europe would get a demo for Dead or Alive Dimensions (I don't know if US will get it today too). I pressed the Demo-button in the menu, but couldn't find any new demos. I checked the News-section, and saw no mention of it. So I checked several sites and all of them, even Nintendo's UK-site, mention it. Then I remembered something. The game was never released where I live.

Dead or Alive Dimensions was not released in the Scandinavian countries. 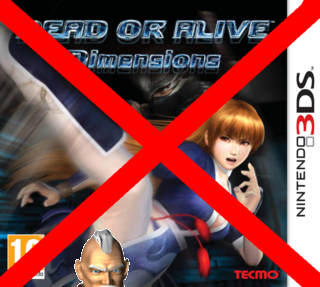 Sorry, Scandinavia. Too offensive for you.

So I tried changing my regions to the UK in the settings and lo and behold, there was the demo. Even the News-section was now mentioning it. Dead or Alive Dimensions Demo.
And I had no problems downloading or playing it. So Nintendo actually went out of their way to try to prevent access to a demo. As if they wanted to say that the rest of Europe is allowed to download and play it, but not us.

Now, we are all annoyed when a game is released in one region but not another. There was a time when it looked like the US wouldn't receive Xenoblade or The Last Story, and I have several times expressed my annoyance that Sakura Samurai has not been released in Europe and there has been no mention of it on release schedules. Just to mention a few recent examples. But a company intentionally going out of their way to hold back simple demo from a few countries within a region? Seriously?

Idiocy, in my opinion. Simple as that.

So this is not only a heads-up to other Dtoiders from Scandinavia with a 3DS if they want to try the demo and how to get around the restrictions, but to everybody to still be aware that sometimes companies will try to pull the wool over your eyes.

So, if you will excuse me, I'm now going to ogle Hitomi in all her 3D-glory. Because as a European, that is my right.
#ShareonCommunityBlogs
Login to vote this up!