GameStop jammed it in the wrong hole (Calibur V)

11:42 PM on 03.01.2012 (server time)    0
Chances are, I'm not the only person here who preordered Soul Calibur V from GameStop, thereby getting screwed out of the Dampierre DLC code in favor of some goofy chunk of plastic done up to look like Ivy Valentine. I thought they were giving out both when I ordered, and realized too late upon not receiving any sort of code that I'd been hosed.

Well, guess what I recieved in my email today, as part of an ad for their weekend promos? 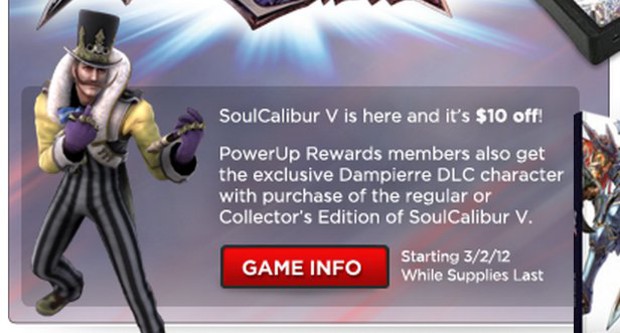 That's right. They've got codes now, but only if you didn't adopt early from them. I've long been okay with fuller, DLC-inclusive "complete" and "Game Of The Year" editions coming out down the line, and sure, this is only one character and not whole new areas or anything huge, but the former tend to take around a year to be released, and said character is still playable against in-game from the get-go, in stock and created character form, despite being inaccessible to those who got shafted out of a code.

Chances are, the code prints out on the customer's receipt, as per other DLC promotional executions as of late, so there's no real way to just go in and ask for one, either.

Thanks, dicks. I'm glad you gave me a toy instead of part of the game for which I paid.
#ShareonCommunityBlogs
Login to vote this up!