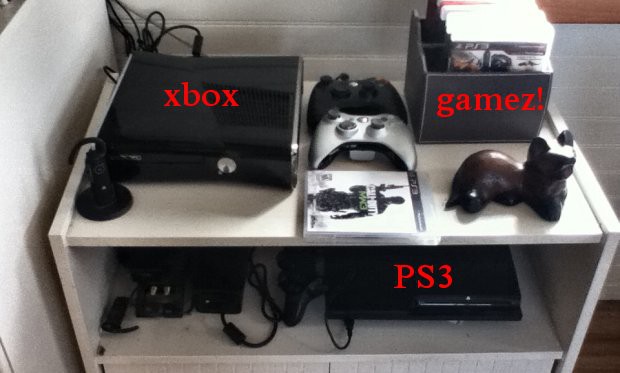 My own gaming set up... which will eventually go into a better storage unit where they are hidden away... and where my cats will quit trying to sit on the Xbox on the top shelf!

I still have some of my very old games... Baldur's Gate: Shadows of Amn, Neverwinter Nights and Icewind Dale for the PC. I'm pretty sure I still have a copy of Zork on a 3.5" floppy tucked away in a drawer. They'll likely end up in the garbage at some point as they're on media that just isn't really used anymore or for windows versions long since dead. In fact, if I can't rightly remember where those games are even stored, then when I do come across them I know that they'll end up getting tossed. In fact, re-playing those particular games would likely ruin the very fond memories I have of them.

While I think it's awesome and wonderful that some people collect games and game-related items... I also think it's entirely possible to be a gamer and not have a massive collection of games or any gaming related items. My home is a reflection of "me", but "me" is more than games, and mostly "me" isn't a collector - of anything. Well... maybe I'm a collector or memories - but those don't take up too much space!
#ShareonCommunityBlogs
Login to vote this up!